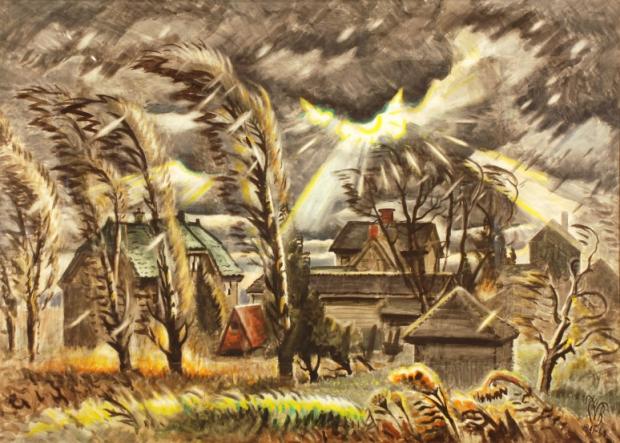 You can’t step into the same river twice. The current Charles Burchfield show at the Burchfield Penney Art Center is a duplicate of the inaugural show at the gallery 50 years ago. But a different show now. Not that the art is different, but that the world around it is different. If we were around for the inaugural show, we’re different. We know things now that we didn’t know then, see things we couldn’t see then. About the art, but even more about the world. About the main subject matter of this artist’s art, nature, the natural environment.

Back then we didn’t know about global warming. About the parlous situation of the environment in the face of juggernaut industrial development then—and now—occurring. (Except for the Exxon scientists, who did learn about climate change occurring in an accelerated fashion, and would have passed on their data to management, which promptly put a lid on the whole troublesome topic.)

But Burchfield saw and understood. Not by dint of scientific observations, with data. Not in so many words as “global warming.” But as a nature artist, saw and understood—and expressed in his art—the industrialization threat to the environment. Which we wouldn’t have seen—not so well as we can now—in the world, or expressed in his art—because fifty years ago we didn’t know about “global warming.” Nor had seen the environmental effects—on the air, on the water, on the weather—over the intervening fifty years. (Or as much or more to the point, seen the previous Charles Burchfield exhibit at the Burchfield Penney, specifically on the topic of the artist’s concerns and anxieties for the environment.)

Artists have painted nature forever, but absent the exaggerated vitalism imagery Burchfield devised to show all aspects of nature—flora, fauna, earth, the heavens—literally pulsating with life forces. Artifacts even—houses—personified. Signaling the all-pervasiveness of nature effects, but also—precisely in the extravagant imagery—a sense of alarm. A sense of the fragility of nature in the face of disvitalist industrial effects. Burchfield’s art was what it was significantly in reaction to the ever more prevalent and menacing industrialization of the modern world.

Much as a generation or so earlier, William Morris’s arts and crafts movement—and our local slightly vitiated mimic version of it, Elbert Hubbard’s Roycroft movement—was inspired in reaction to dehumanizing and disvitalizing ever more prevalent in England and America industrial production methods and goods. Morris and John Ruskin’s essentially medievalist solution. Pre-Raphaelite, pre-modern.

Burchfield was essentially medievalist, too. Nature was sacred. Creation—in whatever sense of the word—was sacred. His forest scenes are medieval cathedral interiors out of doors. (A commonplace about medieval cathedrals is that they are like forests in stone. Burchfield turns the commonplace around, inside out.) A centerpiece work in the present exhibit is Burchfield’s large-format watercolor Dawn in Early Spring. A central group of trees like a cluster of nave pillars and gothic arches. As well as like a medieval cathedral oriented toward the east—to coin a redundancy—and the rising sun. Adjacent wall text in Burchfield’s handwriting from his notebook declares, “I want to praise and exalt nature as Whitman has done in ‘Leaves of Grass.’”

A reverential view of nature, but not a sentimental view. Other works show nature in the raw. North Wind in March is a desolate scene—Lear on the heath, only missing Lear—of lacerating winds and weather, and more severe storm in the offing. And pair of Burchfield surrogate death’s head crows clinging to a scrub tree, with part of the background landscape echoing the form of one of the raucously complaining crows. In a glass case nearby is one of the taxidermied crows Burchfield kept in his studio and occasionally included in his paintings, much as Cezanne kept several actual death’s heads in his studio and occasionally included them in his paintings.

But artworks—and an artistic career—much more about life than death. One of Burchfield’s darkest mood nature paintings, December Storm, shows a farmstead under a sky of black clouds, but near the conclusion not the commencement seemingly of the titular rainstorm. Bright sunlight poking through the dense cloud layer.

Well representative of his work as a whole is his nature glory spectacle painting Fireflies and Lightning. Upon finishing this piece, Burchfield wrote in his notebook, “that at seventy-one I am able to sustain a creative impulse long enough to complete so large a picture fills me with the hope of doing my best work from now on—and with gratitude to God for giving me this power.”