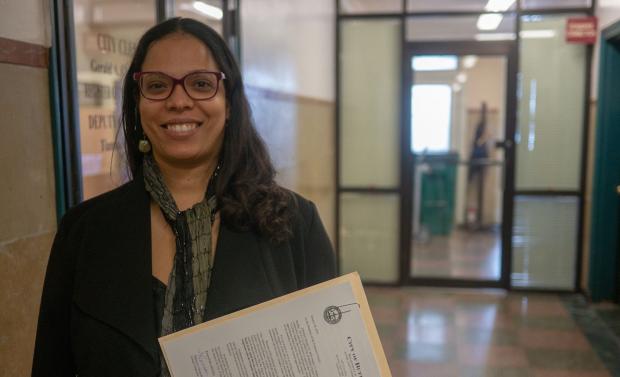 Color us disappointed but unsurprised by the Erie County Democratic Committee’s endorsement of Barbara Miller-Williams for Buffalo comtroller last week. While the role of comptroller hasn’t always been as hotly coveted as it is now, with multiple candidates eyeing a run—including the acting comptroller, Vanessa Glushefski—it remains the only citywide-elected office besides mayor and thus an important check on the mayor’s power. There’s been some elaborate back channel dominoes about which we can only speculate, but one of Mayor Byron Brown’s sharpest thorns in his side had been Mark Schroeder, who challenged Brown for mayor in 2017. Schroeder recently vacated the position because he was suddenly made an offer by the state he couldn’t refuse, to become the head of the Department of Motor Vehicles. Was awarding Schroeder this post meant to soften the blow dealt by Governor Cuomo onto Byron Brown, when he removed Buffalo’s mayor from the chairmanship of the state’s Democratic Party after only a year? It sure feels that way now, as the Democratic Party endorsed Miller-Williams, a Brown loyalist, instead of Glushefski, who has accounting and law degrees and has rallied some ardent supporters in Buffalo’s progressive set. The Miller-Williams endorsement landed like a thud on social media, with little engagement beyond disgruntled Glushefski supporters asking how Democratic leaders could pass over a more qualified candidate who already is on the job, and whom the party nominated as their best choice for Erie County Comptroller in 2017. —THE PUBLIC STAFF

Kristina Johnson, the chancellor of the State University of New York system, is quietly stepping down from the board of directors of AES Corp, an electric utility that has been dumping toxic coal ash from its power plant in Guayama, Puerto Rico. AES’s coal ash disposal has created significant public health hazards for communities in the Dominican Republic and Puerto Rico where the dumping occurred. Johnson’s exit comes as AES faces increasing pressure over the coal ash as it seeks to renegotiate its power purchase agreement with PREPA, the Puerto Rico Electric Power Authority. According to a filing with the Securities and Exchange Commission, Janet G. Davidson was appointed to the AES Corp board on February 22, 2019 and is standing in Johnson’s stead in the April 2019 election of directors at AES’s annual shareholder meeting. The appointment of Johnson’s replacement came only four days after Buffalo’s Public Accountability Initiative reported on the conflict between her governance position at AES and SUNY’s humanitarian efforts in the wake of the 2017 hurricanes that devastated the island. It is unclear whether Johnson intends to divest herself of the 151,151 shares of AES stock that she owns, which had a value of $2,657,234 at the close of the market on March 6. —ROB GALBRAITH & ABNER DENNIS, PUBLIC ACCOUNTABILITY INITIATIVE

The people who used to ride with the felonious political operative Steve Pigeon are out and about, trying to take over bits and pieces of Cheektowaga town government and circulating petitions for a Democratic County Executive primary candidate, attorney Peter Reese, who is also helping to run the campaign of Gerhard Yaskow, one of about a half dozen candidates hoping to succeed retiring Fillmore District Councilman David Franczyk. It’s nice that there are about seven people nostalgic for the good old days of conspiring with the fusion parties to ratfuck endorsed Democrats, which was Pigeon’s stock in trade both during and after his relatively brief but controversial chairmanship of the Erie County Democratic Party two decades ago.

Speaking of which, fusion voting got some attention in the last few weeks because the Working Families Party—a lefty, union-funded fusion party that famously endorsed Cynthia Nixon over Andrew Cuomo last year—decided to combat a Democratic push to abolish fusion altogether. Never mind that New York is one of only a few states that allow this practice, fusion voting is nothing but a way for political malefactors to cut dirty deals; e.g., endorsements in exchange for jobs. Fusion is what led to former Senate majority leader Malcolm Smith to go to jail. Fusion was the way Steve Pigeon colluded with Republicans to screw over Democrats and make a living for himself as a political consultant. Fusion is what enables the criminal “Independence Party” enterprise to continue to operate and confuse voters. Sure, voting is too restrictive in New York and the system could use an overhaul, but fusion is not some sort of voting rights bonus. It’s a conduit for criminality and graft, and has been for some time. People with longer memories will remember how the late rumor-monger Joe Illuzzi would sell ads to politicians as part of a package that would a) prevent Illuzzi from printing nasty, false rumors about that politician; and b) buy the Independence Party line from a Springville barber who ran its local committee.

Brexit has turned into an utter shambles. With just days left before Article 50 triggers an automatic exit from the European Union, MPs yesterday rejected Theresa May’s clumsily negotiated exit deal for a second time. Brexit has turned out to have been brought about through what appears to be electoral fraud and cheating, assisted in part by Russians intent on striking back at the west for EU and US sanctions brought about in the wake of Russia’s illegal annexation of the Crimean peninsula. It is against this shambolic backdrop that New York’s worst legislator, Assemblyman David DiPietro of the Southtowns, has suggested breaking up New York into several states. After all, what better way to counter the utter moral and political bankruptcy of your political party and ideology than to basically do two mini-Brexits, thus causing Western New York to lose its downstate subsidy and become Mississippi-on-the-Lake. Re-drawing the political map to make Western New York “redder than Texas” and poorer than Alabama. The rationale is, at least partly, an effort to force poor people who rely on programs like Medicaid to leave.

Finally, where the are Tesla’s solar roofs? What are they doing in that gigantic building on South Park Avenue? —ALAN BEDENKO

Read more about all of these stories at dailypublic.com.