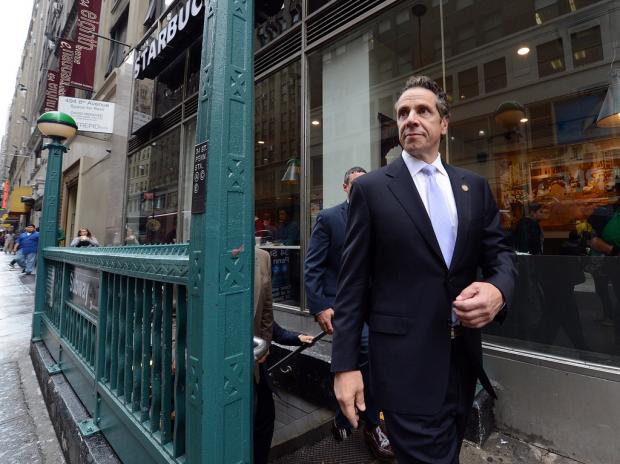 Governor Andrew Cuomo: The governor, who is feeling the heat from progressives lining up behind presumptive nominee Cynthia Nixon, tweeted last week: “Failing schools, NYCHA, Rikers, what do they all have in common? They have mostly minority populations and they are all being abused. I see my job as Governor to put my thumb on the scales for social justice.” This is an encouraging thing to hear from the governor, but also a bit frustrating for progressives who see the governor as dragging his feet on marijuana, cash bail, solitary confinement, housing policy, and public corruption reforms. You know, the kind of stuff that creates widespread social injustice in the first place?

Pastor Langon Hubbard, of the First Presbyterian Church of East Aurora, weathered a storm of vitriol visited upon him on Facebook by a creature named Nick Orticelli last week. The occasion was Hubbard expressing his reservations about the “SAFE Act Forum” hosted by Assemblyman Dave DiPietro at the East Aurora Wesleyan Church last Saturday that featured four speakers, all of whom favor repeal of the state’s existing gun control legislation. For this and other progressive positions, Hubbard was subjected to long, angry, insulting diatribes from Orticelli on Facebook, a conservative attack-dog-without-portfolio who works for developer and former Republican gubernatorial candidate Carl Paladino’s Ellicott Development. Hubbard responded with grace and firmness, for which he earns our applause. (The forum itself was largely civil, if certainly partisan, though next time DiPietro might want to warn his pro-property-rights allies that it’s not cool to take over the parking lot at neighboring St. Matthias Episcopal Church without asking permission.) Orticelli is now publicizing another SAFE Act forum at a church, again with a politically partisan, anti-gun-control lineup that includes Paladino. (That’s Thursday, March 15, 7pm, at My Father’s House Church, 140 Pound Road in Elma.) Interestingly, Orticelli is the subject of an order of protection as the result of harassment charges brought against him by a Buffalo activist, which requires that Orticelli surrender any guns he may own to authorities. He has surrendered no guns to date, and no authorities have checked to determine whether he is compliance with that part of the court order.

Catholic Diocese of Buffalo: Apparently, Bishop Richard Malone is “pondering” whether or not to continue covering for priests accused of sexually abusing children. We have a suggestion: Don’t do it. The public and the survivors—not only the survivors of clergy-involved abuse but sexual abuse survivors across the spectrum—deserve to see the list of suspected priests be disinfected by the sunlight. Malone has been in the shadow of abusive priests and the system that protects them for his entire career. It’s time he step into the light.

Frank’s Red Hot: There was such a thing as National Ranch Dressing Day and the Buffalo-born hot sauce committed the faux pas of recognizing that everywhere outside of Buffalo, wings are known as “Buffalo wings” and that in many godforsaken places outside the 716 they are served with ranch dressing. Nothing gets Buffalo’s dander up like a perceived slight, so one of the region’s most recognized brands straying from its roots was treated like some arch betrayal, as if ranch dressing was a liquefied version of Tom Brady into which folks were dipping their sacred orange wings. But come on, Frank’s, it’s your job to be an ambassador for the wing; everyone knows ranch is just cheapo imposter for the real thing!

The Buffalo News: The Buffalo (Niagara Partnership) News penned a completely predictable editorial panning laudable efforts underway in the Fruit Belt to create a land trust and put real estate in the community’s hands, a move that would partly shield the historically African-American community from speculation and gentrification. The News correctly points out that real estate creates personal wealth, but then criticizes the land trust for barring developers, who would extract corporate wealth. The creation of a land trust wouldn’t stop home values from rising, but would give the neighbors greater ability to own homes and tether their own boats to the rising valuation.

Erie County Industrial Development Agency: A few blocks west of the Fruit Belt is the brand new $100 million Conventus building, which appears to be on the verge of being sold by Ciminelli Real Estate to a Hong Kong-based company. The project received $4.7 million in IDA tax relief, none of which is expected to flow back to the county after Ciminelli makes a tidy profit. We’ll wait patiently for the Buffalo News editorial board to explain to us why this is a good thing.