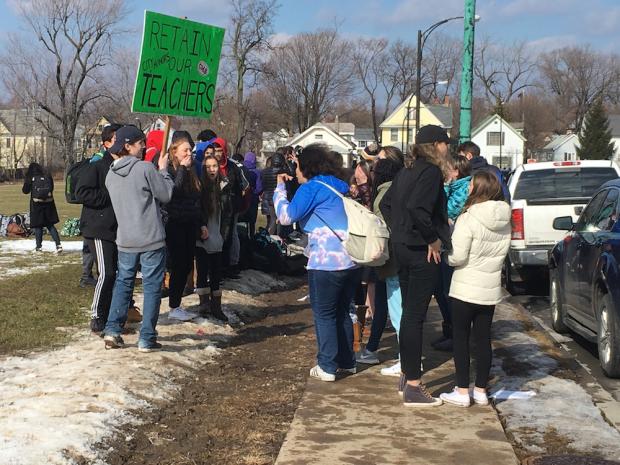 We represent a group of BPS #195 families urging the District to immediately stop the mid-year transfers of 5.5 teachers, and for all parties to engage in mediation to resolve this protracted contractual issue.

During the mediation process, we ask that a creative solution to the teacher aide situation at #195 be arrived at such that the district can better use their resources in other schools. It is apparent to all involved, including students at the school, that requiring 16 aides at #195 is excessive and unnecessary.

We understand that #195 is one school in a larger community and we advocate for all Buffalo Public Schools to have the resources they need to ensure high academic achievement for all.

This situation could have been handled differently by the District and the building administration. The District and the building administration took measures that were not in the best interest of the students, leaving them on the thin ice of the legal system, when at any moment the court could grant the District’s petition to lift the temporary restraining order and to go ahead with the immediate transfer of 5.5 teachers.

Our children are living with the uncertainty that at any moment their teacher could be transferred out of their school. It appears that the music program will be essentially dismantled and the IB program is also at risk. Most of the 11th grade will be adversely affected if their IB Literature teacher would, at any moment, be required to abandon his planned-out lessons for the year, effectively cancelling the course. How does this make sense?

Other than two letters to parents, the last one notifying us that 5.5 teachers would be transferred out of CHS on February 27, the Principal has not communicated at all as to how the school would adjust to his decision to eliminate these teachers. Neither the District nor the building administration have held a public, open, all- #195 meeting to explain how it is that we are in this situation and how we are going to move forward from here. Limited access meetings have been held by various stakeholders, adding to the divisive, poor communication with families at #195. Continued cuts at #195 have been rumored and parents are aware that changes may be made without their input again in the near future.

At a moment when nationwide students are demanding their voices be heard, students should be heard in matters that affect their learning and their schools. We are proud of the steps #195 students have taken to make their voices heard on this issue of transferring their teachers.

We urge the Board—our elected officials and representatives—to direct Superintendent Cash and the Buffalo Public School District to stop the transfers and engage in mediation, putting children and families first.