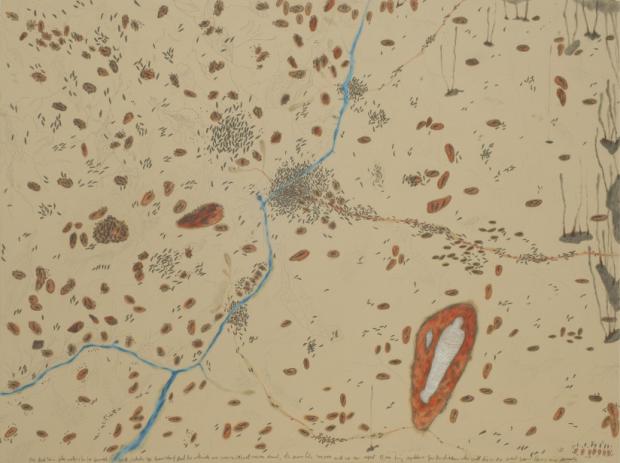 If you were overwhelmed and dismayed by the chaos superabundance of artworks by David Schirm in a recent show of his life’s work at Hallwalls, check out the show of less than a score of his paintings/drawings at the Burchfield Penney that makes it all make sense.

Art in an art brut vein. The look of outsider art, inept cartoon art, doodle art. But passionate and poignant. With ample titles and handwritten added-in text to make it clear what’s going on. And humor to make it palatable.

Back in the day—way back—when artwork had to depict something—before modernist formalist abstraction swept everything else out of the gallery, as it were—but formalist abstraction has had its day and reign, and for some time now depiction has been making a comeback—back in the day, theorists about art—about what was great and what less great—categorized artworks on the basis of genre. Genres such as landscape, portrait. still life, etc. And the highest, most exalted genre was what was called history painting. Basically meaning just narrative painting, art that tells a story. But significant story. Sometimes from secular history, sometimes religious history, from the Bible.

If we still categorized as to greater and lesser by genre, Schirm’s art would be in the highest category, history painting/drawing. Significant stories about past matters, but also some present, and even some future. Some stories he must have learned about the way we usually learn about history, that is, at some remove, by reading, studying, etc. Some he learned about directly, through personal experience. The future stories—about things he really has no knowledge or experience of, but then neither does anyone else—are satiric alternative versions of stories people tell who pretend to know.

The part he learned from personal experience is about the Vietnam War. Two partial self-portraits in R&R in a hot tub in Japan, and a work called Accumulations from the Country, showing a battle aftermath dispersion of discrete human body parts, nature flora and fauna fragments, and occasional partial demons. Another war aftermath picture—scatter array of body parts again, plus numerous mostly integral female figures—is called When I Go to Paradise I Will Have 72 Virgins, But I Will Spend My Time Looking for My Johnson.

Another that about sums up the exceeding dumb criminality of the whole Vietnam enterprise—depicting half a dozen or so naked humans, male and female, calmly and unemotionally shooting or stabbing one another—reminiscent at once of the two iconic photos from the Vietnam War, the one of the Vietnamese general summarily executing a captured enemy with a bullet to the brain, and the one of the napalm victim little girl running naked down the road—is called It’s Very Clear, People Must Not Do This to One Another.

History past—from before the artist’s time—in a work on the Hawk’s Nest Tunnel tragedy in West Virginia in the 1930s, said to be the worst American industrial disaster ever. An enormous three-mile tunnel through solid rock that was found to contain high levels of silica, to which the 3,000 or so workers in the tunnel remained exposed throughout the digging, with little or no breathing protective equipment—though management personnel, when they had to enter the tunnel, were outfitted with protective equipment—resulting in some 760 listed official deaths from silicosis, though undoubtedly many more unlisted. The piece shows what look like x-ray views of men with black lung disease.

History present in a work the artist produced in the 1990s but that could have been made yesterday for the #MeToo movement. It’s called There Must Be No More Violence Against Women, and shows some faces with eyes and mouths sewn shut, amid numerous what look like daddy longlegs spiders, and what look like lily flowers morphing into angels about to fly off upwards.

Another present history piece—if not quite current moment, close enough, and relevant enough—on overlooked and uncounted Iraqi citizen deaths in the Iraq war. With a hand-lettered caption along the bottom of the picture: “The dead lie in piles waiting to be buried. Well, whata ya know about that. The estimates are wrong. It’s not 100,000 dead, it’s more like 200,000…”

Plus a futurist series on alternative scenarios to religious Evangelicals cockamamie anticipated rapture event, when supposedly, after an Armageddon fight to the finish with the demon forces, elect Christian believers—living and resurrected dead—will be caught up into the sky to live with Jesus forevermore. Shirm’s scenarios show Jesus with a laser finger—for zapping devils—and choirs of snowy angels and giddy elect. One particularly unorthodox alternative scenario has the devils winning.

The David Schirm exhibit is called Angels and Demons. It runs until March 31.