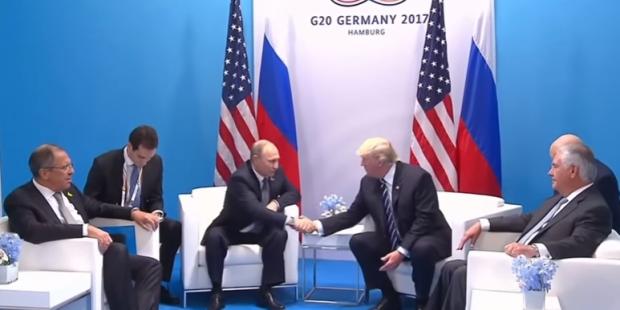 Last week in a shopping area of Salisbury, Sergei Skripal and his daughter were severely injured after being poisoned by some sort of Russian-developed nerve agent called “Novichok”. Skripal is a former officer in Russia’s FSB who was convicted in Russia of treason for passing secrets to the British. As part of a 2010 spy swap with the US, Skripal emigrated to the UK. The Daily Telegraph claims that Skripal is close to Christopher Steele, he of the now-infamous Steele Dossier, which is a dump of raw intelligence related to the Trump family business and its ties with the Russian state and its mafia subculture.

En route to DC from Nigeria last night, then-Secretary of State Rex Tillerson met with reporters in the back of the his Air Force jet to offer harsh criticism of what appears to be Russian state-sponsored murder-by-nerve-agent in the streets of Salisbury.

“It’s almost beyond comprehension that a state, an organized state, would do something like that.”

The answer is right there in the quote. “Russia” and “organized state” are oxymoronic.

We got off the plane with Tillerson less than four hours ago. There was zero indication on flight home that this was imminent.

On Monday, British PM Theresa May told the Commons that Russia was “very likely” behind the attack on the Skripals; that a hostile foreign intelligence agency had attempted to commit murder by poisoning of British residents in Britain.

… when asked ― three times ― at a White House press briefing about Russia’s link to the poisoning or any possible repercussions for the country from the U.S., Sanders carefully did not say “Russia” — or otherwise address who may have been responsible for the attack. She characterized it as an “indiscriminate” attack, although British authorities have concluded that Skripal was clearly targeted.

“We’ve been monitoring the incident closely, take it very seriously,” Sanders said. “The use of a highly lethal nerve agent against U.K. citizens on U.K. soil is an outrage. The attack was reckless, indiscriminate and irresponsible. We offer the fullest condemnation.”

“So you’re not saying that Russia was behind this?” a reporter asked.

“Right now, we are standing with our U.K. ally,” Sanders said again. “I think they’re still working through even some of the details of that.”

Pressed a third time, an annoyed Sanders answered, “Like I just said, we stand with our ally and we certainly fully support them and are ready if we can be of any assistance.”

Thanks to this new book, we know that Trump has had a weird crush on Putin at least since the Moscow Miss Universe pageant, but is this White House’s refusal to even gently chide Russian malfeasance due to a childish Presidential desire to become friends with the Russian dictator, part of a deal that was struck, or the omission of someone who is being blackmailed? It has to be one of those; logic and reason prevent any other explanation.

The Washington Post is reporting that Trump asked for Tillerson’s resignation on Friday, which may explain why Tillerson felt free to critique Russia on Monday. But this:

BREAKING: Tillerson aide: Trump never explained to Tillerson reason he was fired, and Tillerson had wanted to stay in job.

And the State Department is now confirming to CNN that Tillerson learned of his firing today — Tuesday — when the President sent a tweet.

Remarkable statement from Tillerson spokesman: Sec State wanted to stay in his job, was “unaware of the reason” for his firing and has not spoken to Trump about it.