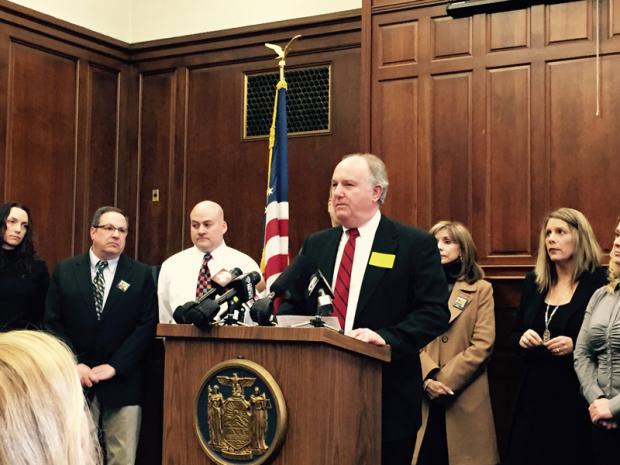 With the drama around Governor Andrew Cuomo’s first budget deal with new Assembly Speaker Carl Heastie building, State Senator Marc Panepinto stood with education leaders at a Friday morning press conference to shake the foundations of the Gap Elimination Adjustment (GEA) and play an income inequality refrain that was echoed by all band members.

Instituted in the wake of the financial crisis of 2009, New York State cut aid to school districts across the state in attempt to balance the budget. Six years later, and thanks largely to a settlement paid to the state by financial interests for banking misconduct, the Governor has placed the GEA issue on the table as he continues his agenda for stringent teacher evaluations and common core testing.

It’s an issue that has affected all school districts, as the presence of Superintendents from Orchard Park and Lake Shore as well as Board of Education members from Hamburg, Ken-Ton, and Springville at the press conference demonstrated.

Panepinto said that state is “balancing our budgets over the backs of working families and students.”

Lake Shore teacher Chuck Kowalski said “the least wealthy are being hit the hardest.” Indeed, when Panepinto said that the Lakeshore district had been “cut to the bone” the contingent of Lake Shore teachers solemnly nodded.

But the most pointed words came from Lakeshore’s Superintendent James Przepasniak, whose district was just awarded $2.9 million in funds owed by the state this week thanks to some plucking by Panepinto.

His repeatedly accused Cuomo of “shenanigans,” and “manipulation.”

“The GAP elimination has drained more than $21 million from our educational programs over the last five years. Our reserve funds are at critical levels and the Governor is now holding out students’ educational opportunities hostage with his political agenda.”

The brief press conference continually refocused on the equitable funding of school districts. Panepinto referenced the Alliance for Quality Education’s study that revealed that 69% of districts statewide receive less funding now than they did in 2008 and that “the gap between the wealthy and poor school districts grew to $8,733 per pupil, the largest in New York State history.”

Przepasniak’s statement went on to excoriate Cuomo along these lines:

THE NEW YORK STATE CONSTITUTION OUTLINES THE EDUCATIONAL STANDARD OF A FREE AND APPROPRIATE EDUCATION FOR ALL STUDENTS. THE GOVERNOR’S ACTIONS AND THE GAP ELIMINATION ADJUSTMENT UNDERMINE THE VERY PROMISES THAT NEW YORK STATE WAS BASED ON.

Panepinto was encouraged that a “one-house resolution” had been approved by the State Assembly and Senate that would eliminate the GEA and has been delivered to the Governor.

The sentiment in the room was that Cuomo was using the budget deal as an opportunity to push through teacher evaluations that are more rigidly weighed by students’ test scores. When asked whether opting out of state tests was a viable option for districts, the freshman Senator said that this was the strength of a democracy, that taking the test or opting out of testing was a decision for each family to make, offering that his 8th grade daughter approached him about opting out and that it was a “conversation we’re going to be having in the coming weeks.”