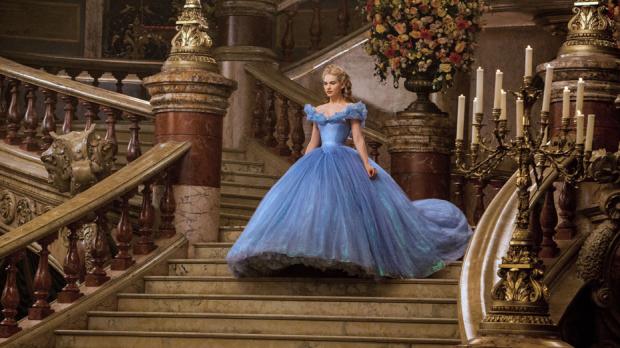 In a way, the biggest surprise about the new live-action Cinderella is that it took the Disney organization 65 years to put out a second movie version. Adaptive reuse is practically an industrial sector in Hollywood and Disney is no corporate slacker in this regard. (To get to the main event at a local preview this week, the audience had to sit through a vapid 20-minute animated short derived from the 2013 Disney category-buster Frozen. Sometimes you can get to feeling that it’s as hard to avoid Disney as it is the Clintons, Kanye West, and the Kardashians.) Poet Charles Perrault’s 17th-century story is probably both the most durable and popular in the history of European fairy tales. There are variants by such disparate talents as Rodgers and Hammerstein and Jerry Lewis and a mordant meshing of the work in Stephen Sondheim and James Lapine’s musical mashup, Into the Woods. (Last year’s movie adaptation, also from Disney, is still in some theaters, and as you read this, a local middle school is presenting their more conventional Cinderella production.)

The other question this new rendition inspires is what induced sometime classical actor and director Kenneth Branagh to accept directing responsibilities for this one—besides the obvious pecuniary motive. He apparently had no interpretive twist or slant to apply, either narratively or visually. He and writer Chris Weitz have mostly gone with the default faithful approach. There’s nary anything significant that isn’t in synch with the traditional tale or Disney’s 1950 animated movie. That is, with the very limited exception of Cate Blanchett’s wicked stepmother. A couple of scenes in the last quarter of the movie suggest a slightly more naturalistic darkness of personality and motive, but it really just amounts to a small plot complication.

Lily James (from Downton Abbey, but now with blond tresses) makes a serviceable but somewhat bland heroine; Richard Madden (from Game of Thrones) is an appealing Prince.

Branagh’s direction is somewhat stolid and sometimes seems tentative, as if he wasn’t sure how to spark things dramatically. Of course, if the target is sub-teen girls, as many as possible, darkness or tempest-tossing isn’t indicated.

Helena Bonham Carter provides some rather pedantic voiceovers, and turns up as a mildly befuddled fairy godmother, playing her as if she’d watched Bernadette Peters’ witch in the stage version of the Sondheim-Lapine Woods. A little too much.

This Cinderella is heavily opulent but not very striking in appearance. Dante Ferretti was the production designer. In the mid-1970s, he worked on Pier Paolo Pasolini’s X-rated Salo, or the 120 Days of Sodom. You gotta be versatile to survive in show biz.