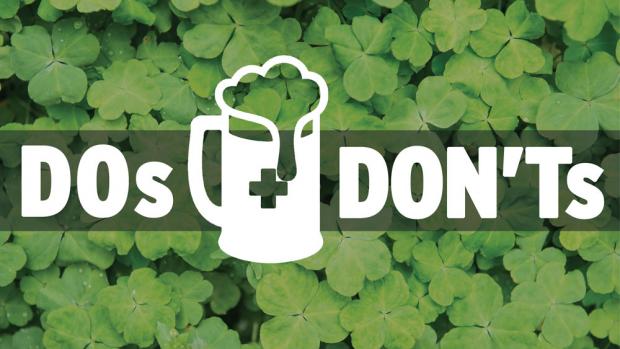 This week the Buffalo Police Department announced that they will be cracking down on public intoxication during the St. Patrick’s Day parades this year. This could be a problem for some people, but it doesn’t have to be if you follow these seven simple “Dos and Don’ts.”

Everyone knows that you appear less drunk when you’re wearing sunglasses. The effect is multiplied when those sunglasses are comically oversized. Trust me, nobody will know that you’ve been drinking since 9:30am.

2. Don’t: Start a fight with the bouncer.

Unfortunately it took Chad Kelly’s run in with a bouncer at Encore to teach us that it doesn’t matter if you’re a top NFL prospect or the nephew of a hall of fame quarterback, you will be arrested if you punch a bouncer in the face in public. Now, if you happen to witness a fight, for the love of god, DO record horizontally, not vertically.

In New York State you can be cited for public urination. Under the Health Code it can even be a misdemeanor. Not only is peeing in public illegal, but it’s a sure fire way to bring attention to your drunkenness, and it’s just rude to pee on someone’s front lawn. The neighbors hate it.

After a long morning of drinking and walking the parade route, anyone woud kill for a nice place to sit. Well, as luck would have it, each year a couch magically appears—like an oasis in the desert—at the corner of North and Delaware. Local “celebrities” usually use the couch as a place to sit for a photo op, but it’s also just a good spot to take a load off and sober up.

5. Don’t: Yell anything racist or homophobic.

This should go without saying, but don’t yell racist or homophobic slurs at people, ever, but especially while drunk in public. In fact, if drinking tends to evoke that kind of behavior from you, then maybe you should just reconsider drinking (or speaking) at all.

The radio spot for the Kegs & Eggs breakfast this Sunday at Mister Goodbar! http://t.co/OI3Jy7uIN5

Not only will eating before you drink allow you to drink more, but it will also help soften your inevitable hangover the next day. Our suggestion for filling up before you drink up: Community Beer Works Kegs N’ Eggs Official St. Patrick’s Day Parade Pre-Party.