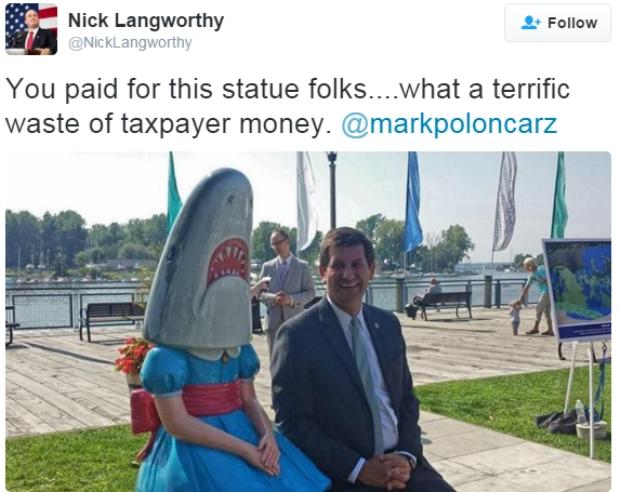 The Erie County Republican Committee tweeted this out around lunchtime on Thursday:

At least the County Executive has his priorities straight… pic.twitter.com/UYNpuPZ5eX

This is because County Executive Mark Poloncarz was going to call for a ban on plastic shopping bags to help the environment. It’s something that has been catching on throughout the first world in order to minimize recyclable stuff that ends up in landfills. Both paper and plastic bags have their disadvantages, but ultimately the goal would be for people to simply use the 99-cent reusables you get a the checkout at Wegmans or Tops.

It also raises another thing: if, as the GOP suggests, plastic bags are not a pressing, important issue, then why oppose it? Why demagogue against it? Because certainly that’s what they’re doing, and in this case they’re overreacting to plastic bags because they need to change the subject from Angela Wozniak. Consider what the leader of Wozniak’s Conservative fusion Party told the Buffalo News,

“For a young individual with high aspirations and motivation, it can be a difficult adjustment because there’s not a lot you can accomplish,” he said.

So, there’s not much you can do as a freshman minority Assemblyman, so start banging the help. He all but said that Albany’s corrupt culture compelled Wozniak’s extramarital coitus.

By contrast, on January 4, 2014, Mark Poloncarz and Jeremy Zellner directly asked for Dennis Gabryszak to resign after allegations of his sexual harassment came out — far before any ethics panel sanctioned him. To draw a parallel with Wozniak, Nick Langworthy and Ralph Lorigo would have had to have asked for her to resign back in October of 2015.

Now, turning specifically to the charges that the scrambling GOP is leveling at Poloncarz,

Erie County has spent $213,581,675 on roads and bridges - which includes capital projects that have taken place — throughout the county since Poloncarz took office in January 2012.

But this isn’t the first time the GOP has been wrong whilst shooting from the hip.

Here is what Nick Langworthy Tweeted when Shark Girl was unveiled.

You paid for this statue folks….what a terrific waste of taxpayer money. @markpoloncarz pic.twitter.com/JEW95a6mzS

She is now a tourist attraction; a must-do selfie. She very quickly became an icon for a Buffalo struggling its way out of a decades-long malaise. She is a bit of whimsy in an all-too-serious world. We need more Shark Girl and less ECGOP.

Oh, and not a penny of taxpayer money went to pay for her.

Maybe Nick and his crew could stop lying about stuff, call for Wozniak to resign, and explain — on the merits — why they give a crap about banning plastic bags because it’s good for the environment and bothers absolutely no one.