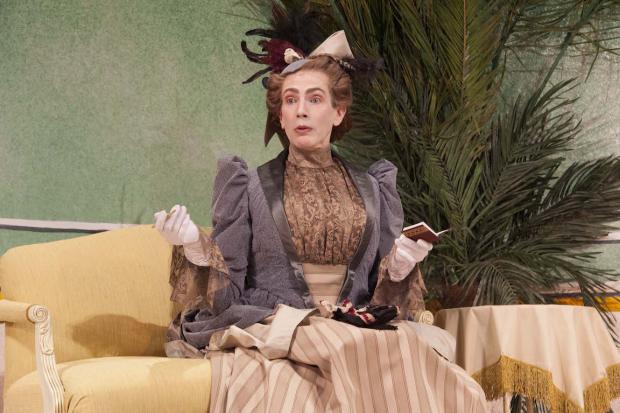 Anthony Chase as Lady Bracknell in The Importance of Being Earnest, opening at SUNY Buffalo State on March 12. Photo by Kwame Agyapon/SUNY Buffalo State.
by
The Public Staff
/ Mar. 11, 2015 8pm EST

Those who teach also do: Anthony Chase is Western New York’s pre-eminent writer on the theater, a columnist for both The Public and Artvoice. He teaches at SUNY Buffalo State, where he is assistant dean in the School of Arts & Humanities. Every Friday he reviews what’s playing in local theaters on WBFO’s “Theater Talk.”

And for the next two weeks he walks the boards as Lady Bracknell in the Casting Hall-Buffalo State Theater Department production of Oscar Wilde’s The Importance of Being Earnest. And who better to deliver a line like this: “Never speak disrespectfully of Society, Algernon. Only people who can’t get into it do that.”

If ever Chase has reviewed one of your shows, or if ever you have wondered about the man on the other end of that distinctive and soothing voice coming over your radio (“…and I’m Anthony Chase”), then you owe it to yourself to attend. Directed by Donn Youngstrom, the show runs March 12-14 & 17-20 at 8pm, plus March 14 at 2pm, at Warren Enters Theatre, Upton Hall, Buffalo State campus. If that seems too brief a run for so felicitous a show, remember: Lady Bracknell does not approve of long engagements.