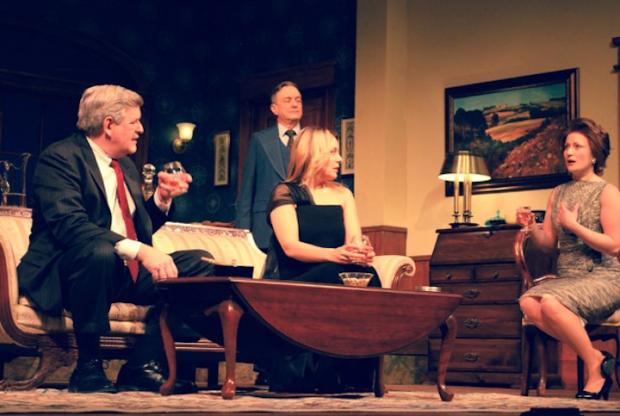 It is act one of this play that best illustrates the title of The City of Conversation, the drama written by Antony Giardina now being presented by Kavinoky Theatre. It is set in the gracious home of Hester Ferris, smart, lovely, stylish, and shrewd. The first three characteristics are the traits of a perfect hostess. The last makes her a perfect Washington, DC hostess.

The occasion is a dinner party. Of course, dinner is a cordial pretense for conversation. And, of course, the conversation will spin around national politics…a job, a passion, a sport, and an obsession for those gathered. That includes Hester, her dinner guest and the Kavinoky audience.

We see Hester and her cohorts in action over a span of 30 years, ending on the evening of Barack Obama’s inauguration ball, but Giardina starts us off with an autumn evening during the struggling Carter administration.

On this night, the invited are a conservative senator representing a swing state and his wife. Helping Hester with the chores of conviviality are her sister, Jean Swift, and liberal senator, Chandler Harris. The conversation, by Hester’s plan, will focus on a cog-and-wheel, bipartisan cooperation which will satisfy Democrats and Republicans alike and just might result in a vice-presidential candidacy for none other than Hester’s consort Chandler.

It would certainly be neat to quietly take credit for this coup. Naturally, any future benefit to Hester could only be imagined.

But Hester’s son, Colin, and his newly beringed fiancée, Anna, arrive, the final term at London School of Economics having just ended. Unexpected guests, uninvited at that, can vex a hostess. Hester, able to rise to any occasion, loans a gown to her prospective daughter-in-law. In effect, Hester has unintentionally groomed Anna to be one of the Capitol’s conversationalists.

What Hester does not lend, Anna is prepared to take. And take she does and does again. Taking the helm while Hester’s guard is down, Anna steers the conversation into conservative waters. Anna’s pitch echoes with patriotism, sane politics, international respect, and government less involved in the lives of citizens, heralding the Reagan, Bush I, Clinton, and Bush II ensconcement in the White House. Not what Hester had planned at all.

The play’s second scene takes place during the time of Reagan’s appointment of Robert Bork to the Supreme Court. The contentious weeks between Reagan’s nomination and the Senate’s denial of this appointment. This two-year-old script gets an appreciative laugh in light of post-Scalia events when Anna asks why a president can’t have his nominees sail through Congress. Giardina posits this event was the end of civil bipartisanship, when the line was drawn in the sand between GOPs and Dems. In this scene Hester and Anna take off their expensive heels and get a chance to kick a lot of sand around aw they discuss who is ruining the country faster.

A very capable cast takes us through this evening. Kristen Tripp Kelley, an intelligent, articulate, charming actress, holds center as Hester. The actress takes on the task of aging her with the decades with integrity. Adrian Gatto plays her son Colin through the 1970s and 1980s segments of the play, then, in the final scene, plays her grandson (Colin’s son Ethan). He is especially strong when playing Colin. Aleks Malejs is effectively cold as Anna who, after usurping Hester at her own party, secures a plum job during the Reagan administration.

This show will be remembered as a highlight of the current Kavinoky season. Each of the actors is fine, and that would be enough if this were merely a political drama. As such, each actor could stand for his or her own character, touting a position like members of a representative congress. However, this is a complicated family drama which deserves to be seen not just for who each member is but for how they relate with each relation, abd how those relations change. And that’s real politics.

While the opening night audience enjoyed a confident performance, I’d wager that a cast adept as this will find more in performance than was planned for them in rehearsal.

The physical production is up to Kav’s usual standards. David King’s set augmented with Diane Almeter Jones’s props have many nice Federal-style touches appropriate to the Georgetown location. Mary Jakiel’s wigs ought to be mentioned for helping to establish time and character. Costume design, credited in the playbill to Benjamin Streeter Clothing Design, is just as apt but is highlighted by one particularly outstanding number in the final scene.

Hester, closing in on age 80 or so, is costumed in streamlined black velvet and accessorized with jewelry and fur, suitable to attending someone else’s party. This costume and Tripp Kelley’s bearing did bring to mind a Washington doyenne of the previous century. Certainly the character Hester Ferris could find a role model in Sara Delano, FDR’s mother, who gave her daughter-in-law, Eleanor, so much trouble over politics and family.

In Washington, as elsewhere, la plus ça change…