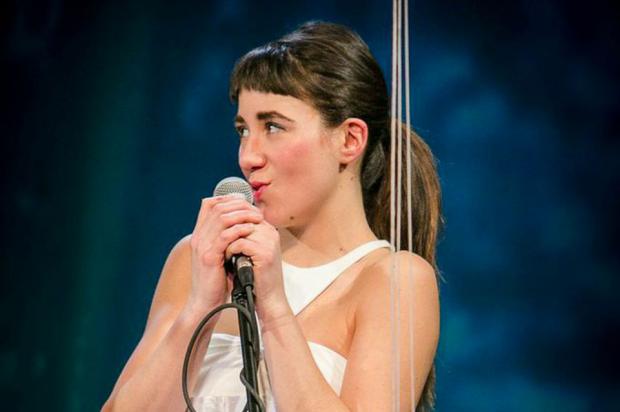 Jessica Wegrzyn is among the most prominent of the new generation of leading ladies in Buffalo’s theater community. These kids never stepped foot in Flynn’s and never met Blossom Cohan. They work constantly, across a wide range of theaters, and in a wide range of genres.

Now appearing in Eugene O’Neill’s The Hairy Ape at Torn Space Theater, Wegrzyn’s eclectic resume includes performances as Jane, the nice girl in Crash, an anti-bullying play at Theatre of Youth. She was Nicole in Le Bourgeois Gentilhomme, a collaboration of the Irish Classical, Lehrer Dance, and the Buffalo Philharmonic Orchestra. She starred as mathematical genius Catherine in Proof at the Kavinoky, and was Trish in Dog See’s God with Theater Jugend. She gave a very appealing performance as Shelly in Sam Sherard’s dark comedy, Buried Child, and Phoebe Zeitgeist in Rainer Werner Fassbinder’s sci-fi thriller Blood on the Cat’s Neck, both at Torn Space. She also played Dotti in Killer Joe with American Repertory Theatre of Western New York. To be any more diverse, her stage biography needs a Cole Porter musical!

In The Hairy Ape, she plays one-half of a Greek chorus that represents dozens of characters that infiltrate the world of Yank, the main character, a lug of a working man oppressed by a rich man’s world. Her principle character is a chaperone character, a disinterested woman, motivated by free booze, who amuses herself with a little casual cruelty.

What word would your friends use to describe you?
Open.

What quality in your current character is most unlike your own personality?
Empathy. She doesn’t have any.

What quality in your current role is most like your own personality?
She can be a tad overdramatic.

When and where were you the happiest?
Amidst a sweaty dance party with all my friends in the Catskills.

What is your idea of hell on earth?
Long-distance bus trips.

What is your greatest fear?
Having to explain to my future children why it’s important to live without regrets, to follow their dreams, and to never settle while punishing myself for doing or not doing one or all of those things.

Which talent do you most wish you had?
I wish I was a good writer.

What superpower do you most wish you had?
The ability to time travel.

What would you change about your appearance?
My face is so round. I’d like some angles. Killer cheekbones.

What trait do you most dislike in others?
When people think the world is constantly out to get them.

What do you most value in your friends?
Their varied creative pursuits. They inspire me.

What quality do you most value in a good director?
The ability to be nurturing.

What is your guilty pleasure?
Gossip Girl.

Who is your favorite fictional hero?
Jay Gatsby. He lived with reckless abandonment. Every moment for pleasure, even in moments of great longing and unrest. I know I can’t live my whole life like that but I’d like to learn to live more freely than I do.

Who is your real-life hero?
Margaret Sanger. She was the woman who founded what would eventually become Planned Parenthood. She empowered the lives of so many women.

What do you consider to be the most overrated virtue?
Patience.

On what occasion do you lie?
When my life feels boring. I might have an interesting encounter at the supermarket but when I retell the story later, that encounter becomes cinematic, possibly life-changing.

What was the subject of your last Google search?
Can you grow potatoes from their sprouts? I’ve been too busy to use my produce and I hate wasting food.

If you come back in another life, what person or thing would you like to be?
A wild horse. There’s this island in North Carolina. They run free. I want to be able to move through space that fast.

What role, in which you will never be cast, is perfect for you?
Shadow in Homeward Bound.

What is your motto?
The universe owes us absolutely nothing.