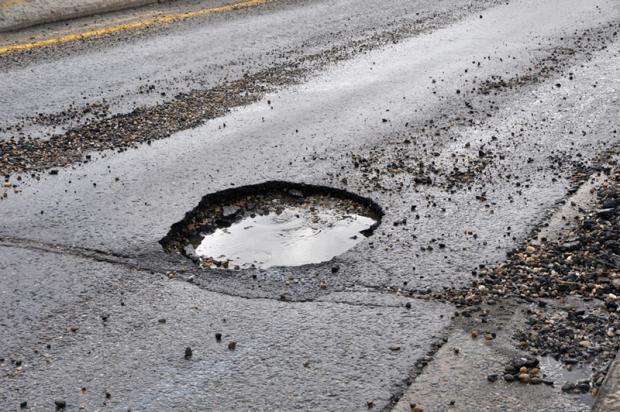 A pothole is a rather unassuming thing, you maybe couldn’t imagine it to be filled with the imaginations of elected officials. Pothole season just happens to coincide with another season this year: the campaign for County Executive is upon us.

It’s an open secret that the GOP wants Erie County Clerk Chris Jacobs to challenge Mark Poloncarz for the county’s top seat, and it appears they’re willing to wait for the privilege of a Jacobs candidacy. Jacobs is now sending the love back at the party.

The office of the clerk issued a press release this afternoon instituting a pothole reporting system to repair county roads. Let’s be clear, he’s selling more than the service of keeping your vehicle’s tires and suspension intact. It’s small town politics at its best, seizing a simple issue with the broadest of bases and offering a simple solution for the simple problem. That’s what passes for leadership.

Mark Poloncarz knows all about it. He’s apparently riding a 20-point lead over both Jacobs and comptroller Stefan Mychajliw having emerged from the recent November storm with a steely commander-in-chief resolve.

The Republicans covet Jacobs for many reasons, and it’s not just for his fundraising capability as a scion of one the area’s most affluent families. The party is sorely in need of a sane candidate who isn’t polarizing or clueless. That he can raise heaps of cash without much effort is the absolute cherry on top of Republican Chairman Nick Langworthy’s sundae.

In the meantime, Mychajliw’s ambition simply can’t fit inside of his modest automobile and campaign war chest. He’ll have to sit on the sidelines and watch for the time being. Jacobs’ fundraiser last month must have gone pretty well, this pothole issue is a softball lobbed straight into the constituency and every phone call made in response—even the ones about potholes on roads not maintained by Erie County—will be counted, weighed, and measured.

Clarification: The Erie County pothole program has existed for several years, so it’s not quite the “news” that Jacobs has framed it as.