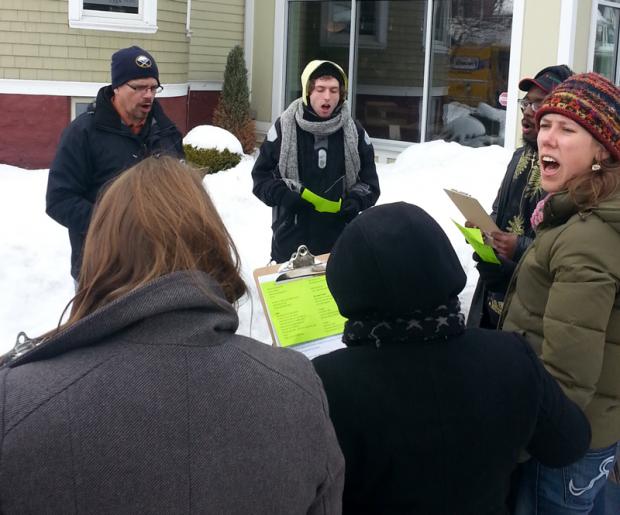 Local 7-Eleven employees and the Western New York Council on Occupational Safety and Health (WNYCOSH), along with other supporters, marched down Elmwood Avenue last Wednesday morning. The employees have not felt safe at their place of work and reached out for help from the local community.

The demonstration comes in response to recent attacks at stores in which they work. On Sunday, February 22, a parolee assaulted, raped, and robbed the female clerk at the 7-Eleven store on Hertel Avenue and Niagara Street at about 5am. The young woman was working alone at the time.

Many of the about 90 7-Eleven stores in the Buffalo area have reported some sort of harassment at their locations. This includes four armed robberies at the Elmwood Avenue and Auburn Avenue location, three of which occurred within the last six months.

“Hey hey, ho ho, workplace violence has got to go!” the group chanted as they marched along Elmwood. The mission was to get signatures from local businesses on a petition to 7-Eleven’s local management to give extra assistance for employees who work overnight.

Lee Swayd, a 7-Eleven employee who works at the Elmwood and Auburn location, and a few other employees, have been organizing demonstrations for months. They have been visiting other stores to gather details and share stories that would help build their case. After the attack at the Niagara Street location, they decided to launch their rally sooner than planned.

Workers and supporters of the movement gathered at the 7-Eleven store on Auburn, each carrying a petition form. After brief introductions, the group marched together in song. They made stops at Campus Wheelworks, Spot Coffee, and Ashker’s Juce Bar. As they entered each store, the petitioners sang a remixed version of singer Lorde’s “Royals,” replacing the lyrics “We’ll never be royals,” with “We want to be safe.” After the song, Swayd delivered a speech calling to attention 7-Eleven’s unsafe working conditions and urging the patrons and employees at each store to sign their petition.

“We’re calling on corporate offices to make sure people are safe,” Councilman David Rivera said. Rivera and Councilman Michael LoCurto were among the supporters who came and rallied with the group. “Assistance is necessary,” LoCurto said. “Whether it means a security guard or extra staff.”

After a final stop in Ashker’s, the demonstrators tallied about 100 signatures. “This isn’t the end,” Swayd said to the group.