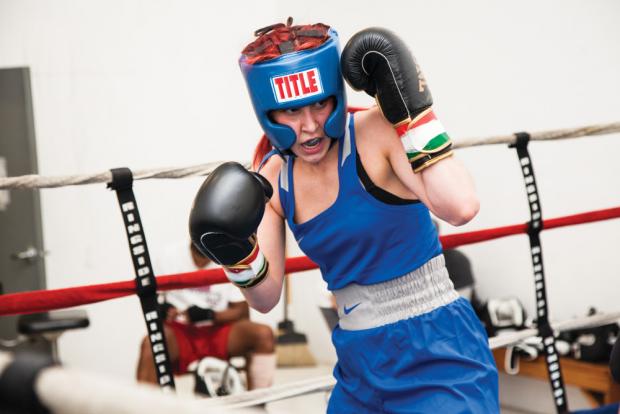 A thousand miles from home and about to step into the ring for the biggest test along her two-year-old journey as an amateur boxer, Kristen McMurtree’s focus sharply intensified. After months of sometimes twice-a-day training sessions in between working overtime at Tim Horton’s, she found herself in Fort Lauderdale, Florida, contending for the National Amateur Championship in the novice division at 112 pounds.

She remembers her coach, UB Boxing Club’s Dean Eoannou, as a nervous wreck leading up to the fight. “He believed in me, but when you go to nationals, you’re fighting whoever is there in the brackets,” McMurtree recalls. Much more so than in the professional ranks, in amateur boxing you never know whether the person you’re about to get in the ring with might be a future Olympian, someone capable of really hurting you. She remembers feeling terrified.

“I’m sitting here and I’m praying. Obviously I’m not going to sit here and ask God for the championship, but I was like, ‘Just show me that boxing is what I’m meant to do.’ When I fell into boxing, at first it wasn’t an easy task,” says the 20-year-old D’Youville College exercise and sports studies student, reflecting last week before a sparring session.

But when she stepped into the ring, a singular determination came to her mind: “I am not going home without the belt.”

McMurtree found boxing during her senior year at Alden High School after some unfortunate events there forced her off the track team. A false rumor spread like wildfire about McMurtree, and people who she thought were her friends turned into her tormentors. After a boxing unit in gym class, she glommed on to a classmate who knew how to work the speed bag. “It just looked really cool, and we hit the pads a little bit, and I was like, ‘All right, I like this’—just the feeling of throwing a punch.”

That night McMurtree’s mom drove her down to Goomba’s Boxing Club in neighboring Lancaster, and the next day she learned her jab and her basic stance, and instantly said she wanted to fight. The track athlete and cross-country runner in her was eager for the carrot of competition. More importantly, she needed a place to belong to.

Two years later, the pain of losing her school spirit is still palpable. “It really broke my heart because here was this school—I was on student council. I was secretary my senior year, I was on National Honor Society. I was so involved, and they just took my love for school away, totally. The kids, I felt like I was looked at weird by faculty, and it just sucked. I used to love that school. I was actually nervous going into college. Boxing was my safe haven. Boxing was, you know…get through school, and then you can go to boxing.”

Once she started at D’Youville, she was lured into the basement of Clark Hall where Dean Eoannou’s UB Boxing Club has made the most of unused space in a half-neglected facility. Around the corner from the gym, a small ring has been set up in a former racquetball court, where the club spars.

McMurtree has quickly built a life around boxing; she teaches boxing classes at UB Boxing, Fitness 19, and at D’Youville College. She knows, more than most, the inherent risks of the sport she’s fallen in love with. Her family is mostly supportive, but she hears it all the time: “‘You’re such a smart person, you’re paying all this money for school. Why are you boxing?’ And the only way I can really reply, especially to my grandma—’cause she does not like it, I don’t think she’ll ever come to my fights—but I tell her, ‘Grandma, this is what I love to do.’”

In the gym last week, McMurtree was sporting some new gear she’s downright bubbly about, two tank-and-shorts combination outfits. Her hair, dyed bright red and tied into some small braids above her neck, would provide a good focal point if not for her overall energetic presence and easy smile.

“What sets her apart?” Eoannou rephrases the question clutching an open cup of Tim Horton’s coffee. He goes through a litany of attributes, starting with her footwork as he observes McMurtree shadow-box. “She sits down on her punches. Twists her ankles into her power punches. Dips on all her angles. Every punch she throws, her shoulder finds her chin. Her heels never touch unless she’s sitting down on her hooks. All straight lines to her punches, everything is A to B, shortest distance to a punch.”

The long, dank walls of the gym are sparsely decorated, save for accolades of current and former UB fighters Sharpied onto sections of the wall. Above the ring in the sparring ring are a few Eoannou mantras: “Your weaknesses will be perceived as strengths belonging to your opponent” and “Don’t leave it in the judges [sic] hands.”

Last July in Fort Lauderdale, McMurtree locked in and attacked. She remembers it well, and she’s memorized the video recording. Her opponent had a hard time handling her movement and kept trying to hold McMurtree in clinches. Eventually she broke free. “I just rocked three huge body shots [under her elbows] and she whimpered. I heard her literally whimper so I was like, ‘Let’s go. Stay on this girl, don’t stop punching.’” McMurtree won; for the first time, it was by a knockout.

“That national title proved to me that I’m where I need to be, I’m on the right path,” she says. “It kind of like buried the hatchet from my bullying. It helped me come to peace.”

She remembers Eoannou saying, “You fought out of your body. I’ve never seen that before.” On the wall in Clark Hall, she’s written: “Kristen McMurtree, 2015 Women’s 112 lb Nationals Champion by KO (1:18) 3rd Round.” In 2020, she hopes to write something else on the wall: “Olympian.”

McMurtree is scheduled to fight on March 12 at the FLARE Center (307 Leroy Avenue) at 2pm as part of an amateur card; admission is $15.