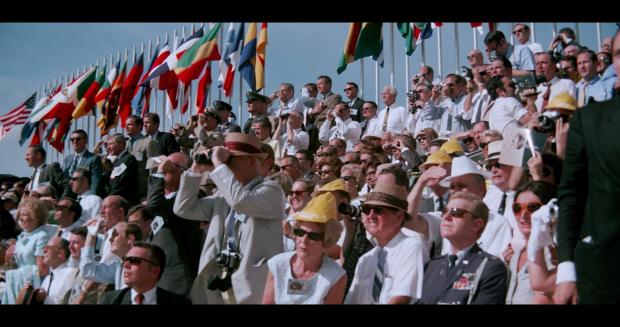 The first thing on screen is rolling tread, huge, bigger than any moving vehicle you’ve ever seen, twice the height of a man standing in front of it. It’s moving—slowly (no danger of that guy getting crushed by it), but the fact that it’s in motion at all is something of a miracle given its size. And just as you’re wondering what could possibly be so large as to require a hauling platform of this size, the camera slowly pulls back, and we see it: the Saturn 5 rocket, 30 stories high, more than twice the height of the Statue of Liberty. When it’s fully loaded it weighs more than six million pounds, and it’s loaded on this day, July 16 1969.

It is being moved out to the launch pad from which it will take three men to the moon. Two of them will get out and walk around, fulfilling a challenge President John Kennedy issued to Congress eight years earlier: to put a man on the moon, and bring him back safely, in this decade.

Did it matter that the task be accomplished “in this decade”? Not really. But there’s nothing like a deadline to fire up your will power and focus your attention. Kennedy’s offer was thrilling: Could it be done? More to the point, could Americans do it?

Yes, we could, and as someone who remembers that day, I can tell you: It felt good, even though as a little kid I had nothing to do with it.

Arriving in theaters in the 50th anniversary year of the moon landing, Apollo 11 compiles documentary footage that had mostly been unseen by the public. The best of it was shot in 65 millimeter by NASA, and it is spectacular, filmed with beauty over utility in mind. As assembled by director Todd Douglas Miller, it was meant to be shown in 70 millimeter or IMAX, options unavailable in our area because we don’t have one of the former and the latter is devoted to computer-generated comic book spectacles. How sad that that they couldn’t make room for this real life spectacle.

That’s not to say that the film isn’t awe-inspiring on the main screen at the Dipson Amherst theater, where it is now playing. Presented without narration, and with little backstory of the effort leading up to this point, Apollo 11 follows the mission from the day of the launch to the return celebrations eight days later. What ever you may have felt about the moon mission, even if you thought it was a waste of money that could better have been spent in other areas, the film makes you realize what a colossal enterprise it was. In one shot, the camera pans over rows and rows of NASA technicians, all seated at computers or other measuring devices. There are hundreds of these men, and the amount of data they are tracking, along with the need to compile the sum of their efforts, is staggering.

As thrilling as the whole enterprise is, you can’t help but come away from it with a question in mind: Was it all worth it? Never mind the various technological advances we enjoy because of discoveries that were made in the process of fulfilling JFK’s bold dare. I know that most Americans thought the same thing that I did as I watched Neil Armstrong and Buzz Aldrin in those grey, grainy images being transmitted from a surface that was not on Earth: this is the beginning of the future we’ve been fantasizing about, that we’ve seen on Star Trek and bad monster movies and Kubrick’s 2001. Starting today, things will be different.

Fifty years later, we’re not exactly living in the world of The Jetsons. Were we misguided? Was it a fool’s mission? Here’s a better question: Having once put the national will to the test to accomplish the impossible, can we do it again? In what is left of our lifetimes, will we see a leader challenge us to set a goal and meet it, rather than setting us all at each other’s throats? I think of the scenes in this movie of ordinary people who have camped out across from Cape Canaveral in order to be able to witness the launch, the fathers holding up their children to show them the future, and hope that we can be those people again.