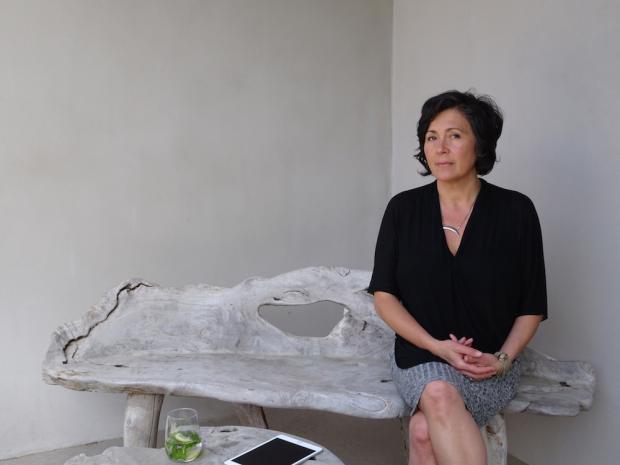 Born in the Mekong Delta, raised in the Washington, DC area, and now living in Toronto, where she teaches creative writing, Hoa Nguyen was nominated for a 2017 Griffin Prize (Canada’s most prestigious literary award) for her book Violet Energy Ingots (Wave Books). The book was well-received by The Boston Review and Publisher’s Weekly. Even The New York Times joined the fray writing, “her poems invoke influences from Sappho to Shakespeare as she rewrites the rights of those played by love, betraying the old appeal to prove fidelity.”

Nguyen was returning to Vietnam for the first time since she was three years old when this interview took place. Between packing and planning, she provided a spectacular interview.

Did you watch Ken Burns documentary series on The Vietnam War and, if so, any thoughts/reaction?

Recently I met a white anthropology professor from England, and he asked me this same question, and I said no rather directly, and he seemed confounded by my response. Later I sent him a URL to a thoughtful introductory essay by the writer Dao Strom which introduces the subject well and collects links to the essays and critiques of the series. But what I wanted to say to the white anthropology professor from England was this:

Imagine that the French had colonized England, exploiting its natural resources, stealing land, exploiting labor, freely killing English people in rural villages, because, naturally, the English are not considered fully human to the French and they could getting away with murder with impunity. Then imagine that the English people organize and rebel. The French fight to put down this uprising—and then their allies, the Germans, join the French to squash it. This joint effort turns into a German effort—and many other things happen including massive carpet bombing of London and other major cities and surrounding countryside. Historic places are destroyed as are ways of life, millions of civilian English people are murdered in these bombings and attacks. Imagine that there was also a massive herbicidal campaign across the England, Wales, and Scotland and Ireland that goes on for 10 years/20 million of gallons (with massive birth defects and high cancer rates to this day), plus napalm attacks, systematic rape, and entire English towns razed and citizens slaughtered. And then later, the Germans come to call it the “England War.” And every year afterwards there are German movies and TV shows of the “England War” featuring All-German soldiers, medics, government officials, the plots and narratives centering Germany as a nation. German films in German on the England War! And in these German films on the “England War,” the English people and land of England is slated as mere setting and props. The English people are not people but interchangeable nameless extras with no speaking roles other than un-translated yells and cries: various hapless victims, many villains, sex workers, or just bodies.

But didn’t say any of that because we were at a holiday party. Ha ha.

The Vietnamese are erased constantly from the national narrative—from inheritance of culture, our own and the culture we are in. Always foreign, other and erased. In conversation with C. A. Conrad about broadcast images of Vietnam and the American war, they noted that “[The Viet depicted there were] just a blur to be erased with bullets.”

What inspired your decision to go back to Vietnam at this moment?

Multiple instigations: one witchy ceremony on a beach on the tip of the Olympic Peninsula with lifelong friends, a writing residency with women writers of the Vietnam diaspora (members of She Who Has No Masters who met, wrote, and worked together in a Corsican villa), and the desire to act as proxy for my aging mother who will never return. More prosaically: access to resources and time, a supportive partner on sabbatical, and literary connections in Hoi An and Hanoi.

It seems common amongst writers who moved to America that they feel displaced, that there is a certain lack of comfort at home, where they bring their Americanness and in society, where they are either physically marked as Other, or culturally, or both. Do you share any of these feelings?

Intimately, especially in my younger years: a shame and stain.

What, then, if anything has changed as you’ve gotten older?

Having some luck, support, and access to opportunity that met up well with my tough and willful constitution. These in turn allowed me access and the ability to gain insight and language to name systems of oppression consistently aimed at the poor, black people, and brown people. But maybe most of all experiencing enduring love, having children, and developing a practice and mindful cultivation of self-love including valuing who I am and the gifts I have.

Some critics have written about your poems and how they are beautiful accounts of domestic life. As a woman, and as a mother is there/was there any trepidation in writing about the domestic life? I ask, because last year I spoke with Maggie Smith who said, “When I became a mother, I didn’t want to write about family and become a ‘mommy poet.’” If a woman writes about her family, the reaction is “We expected that from you, why aren’t you writing something more cerebral?” There’s a stigma.

The writer Ursula K. Le Guin passed away recently. She was a writer and a mother and I read where she spoke to this issue—she said, “I feel a certain obligation to sort of stand up and be counted as a woman who has had kids and brought them up, and also done creative work, which—particularly in the arts—there does seem to be almost a sort of agreement that this can’t be done.” I felt a certain obligation to stand up and be counted. It was a punk act of defiance.

Is the obligation you refer to an obligation as a poet? A citizen? What do you think are the roles for both? Do they differ?

Both and same. I used the word punk specifically in my reply in that my sense of being a person in/of this world has been informed by punk and post-punk US movements. I think of my job as a poet citizen as seeing into and exposing patterns that inform/deform collective experience: to reveal them, test them, speak to them, call upon aspects, celebrate the uncelebrated—and to do so with my own song, not the commercially accepted idea of song. I have long felt the need to be a poet, as myself and in a self-styled way: inside a collective of art-making, indifferent to the fear of stigma and outside of the notion of “acceptance”. I’m a Fire Horse; we are fiercely independent by nature.

Anyway, if I wanted to fashion myself to be acceptable, I would have Anglicized my name as Heather, Holly, or Helen—and I would have had a much easier time of it if I had. But to claim and celebrate my given name, Hoa, is that: an act that challenges dominant norms, to claim my own song. It’s both a defiance and celebration.

Who are you reading? Which poets/writers are you most excited about right now?

For the winter of 2018, I’m reading in and around Susan Howe, Emily Dickinson, and Gertrude Stein for a reading and writing poetics workshop that I’m leading in cyberspace and Toronto called “Cutting Across Linearity”. It’s a switchback workshop where we flip back and forth between Dickinson and Stein’s Tender Buttons with Howe’s My Emily Dickinson as a binding element.

I’m excited by the works of creative nonfiction writer Alicia Elliott (her forthcoming book of essays, A Mind Spread Out on the Ground), short story writer/musician Leanne Betasamosake Simpson (The Accident of Being Lost), and the poet Canisia Lubrin (Voodoo Hypothesis).