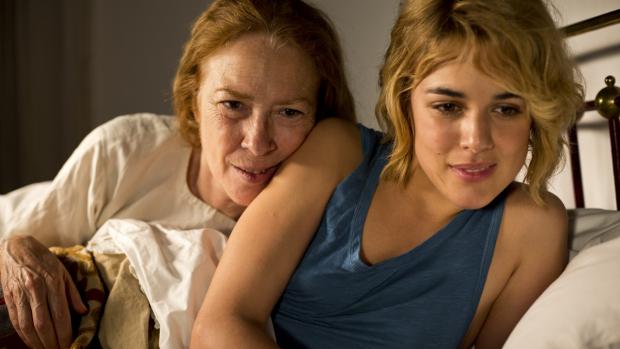 Alfred Hitchcock fans will be the best audience for Julieta, the new film by Pedro Almodovar that was once meant to be his first American film, a starring vehicle for Meryl Streep. Adapted from three stories by Alice Munro, the film plays like an exercise in seeing how many Hitchcock references Almodovar can indulge, mostly to Vertigo and Rebecca, without actually remaking either of those stories.

Emma Suárez plays the role designed for Streep, a middle-aged academic who, when we first see her, is packing up the furnishings of her Madrid apartment in preparation for a move to Portugal with her boyfriend. A chance meeting in the street with an old friend of her daughter Antía puts an end to that: Julieta breaks up with her boyfriend and takes a new apartment in the building where she raised her daughter.

From there the story proceeds largely in flashback, with Adriana Ugarte as a younger Julieta in the kind of wig that they used to put on Hollywood actresses to try to make them look radically different but not actually different. (Intentional, I suspect.) We see how she met Antía’s father Xoan on that favorite Hitchcock setting, a train; how their early life together was haunted by the memory of Xoan’s first wife, a memory kept alive by his Mrs’ Danvers-ish housekeeper (played by Almodovar regular Rossy de Palma). Throughout the sea is as forboding as it was in Vertigo, like the incessantly disconcerting musical score that can’t help but remind you of Bernard Herrmann.

You can go on and on with this game, but it’s not clear what the point is. Almodovar is not trying to tell a Hitchcockian story, and the insistence with which he plays with those tropes will leave a lot of viewers expecting a shocking ending that never comes. It’s all quite lovely to watch, and as always he works well with actresses, but in the end the veteran filmmaker’s considerable skills are brought to play on a film that is both allusive and elusive.

There’s no question that cat lovers will be delighted by the new documentary Kedi (the title is the Turkish word for “cat”). As the particular subject is homeless felines who freely wander the streets of Istanbul, the one question those folk might have is, are there any scenes showing the dark side of such an existence? If, like me, you lunge for the remote control any time you hear Sarah McLachlan’s voice on a TV ad, let me put you at ease: there’s none of that here. These are cats who, while not exactly worshipped, are well-regarded by the bipeds with whom they share this ancient city. As one of them puts it, “A cat meowing at your feet is life smiling at you.”

Having reassured one segment of the audience who might head to the North Park theater this week to see Kedi, I must do the same for another segment, those who feel that an important measure of any city’s quality of life is the degree to which its cat population approaches zero. The film is equally enjoyable as a portrait of Istanbul, a city whose roots go back three thousand years, and cats, with their natural access to both the high and low parts of it are well-qualified to be guides. There is little here that is likely to be excerpted and passed around on YouTube; despite what the film’s trailer may have led you to believe, the cats are not given clever character names or otherwise anthropomorphized. Everything is of the moment: the filmmakers spend a few moments or minutes with one person and cat, then move on. At 80 minutes it shouldn’t tax the patience of children, even those too young for subtitles.