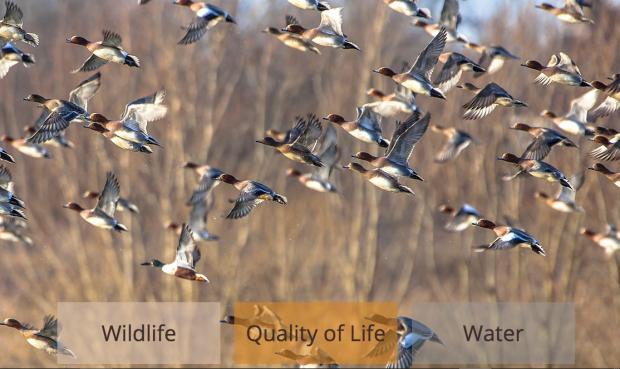 Screen grab from frontierstonewny.com
by
Aaron Lowinger
/ Mar. 8, 2016 7am EST

For at least the fifth time in ten years, Frontier Stone has sought formal authorization for a quarry on a 213-acre plot of land bordering the Iroquois National Wildlife Refuge in Orleans County. The company, owned by David Mahar and based in nearby Wilson, NY, has submitted a fifth draft environmental impact statement for consideration to the DEC, according to the Daily News Online, a website serving Genesee, Orleans, and Wyoming counties.

In response to the company’s previous failed attempt in 2014, the DEC concluded the quarry would mine 100 to 150 feet below the current surface, according to a Buffalo News report. Because the property effectively already sits on a drained wetlands with a high water table, the DEC then estimated 554,264 gallons of water per day would be funneled into a ditch.

The impact on the refuge would be significant. The Iroquois National Wildlife Refuge is 10,828 acres of mostly swamp and wetlands, the largest remaining vestige of Lake Tonawanda, a large shallow lake left in the wake of the last glacial period that stretched from the Town of Amherst to near Rochester in Holley. It attracts 268 species of birds, supports four distinct ecosystems (grasslands, forests, emergent marsh, hardwood swamp), 42 species of mammals, amphibians, reptiles, insects, and numerous wildflowers. The area contains many trails and public access points for kayaking, fishing, and hunting, and is visited by 40,000 every year, according to the Friends of Iroquois NWR.

The proposed site of the quarry is separated from the Refuge by a National Grid power line easement.

A group has mounted a steely resistance against the quarry during the repeated remonstrations, with members submitting a press release to the Daily News Online, listing their reasons why the DEC should keep the shutout alive including the negative impact on well water, preservation of the habitat of threatened/endangered species of birds (short-eared owl, bald eagle, upland sandpiper), the flyway zone for migrating birds, and the contamination of the Oak Orchard Creek Watershed.

(zoom out for location of property)

The company’s website includes high-res images of wildlife and habitat scenes, and a number of galling statements about the benefits and safety of their project, including this proviso: “Upon written request of United States Fish and Wildlife Service (USFWS), Frontier Stone will provide an alternative mine dewatering route in order to assist the refuge with their seasonal wetland marsh management efforts. A new quarry can help the long-term sustainability of the refuge by providing a fresh water source to combat the effects of global warming.”

Nevermind that the refuge won’t face long-term freshwater sustainability issues unless someone digs a quarry 150 feet beneath the water table. Currently, about 40 percent of the INWR are shallow pools and freshwater marshes.

Not to be outdone by that claim: “The quarry is not a permanent establishment. The expected lifespan of this proposed mine is 75 years, after which the land will be reclaimed. The reclamation plan includes developing the quarry areas into lakes after mining is complete. These lakes will provide another productive habitat for fauna, particularly waterfowl.”

That is, if any of the waterfowl are left. Perhaps most telling of the company’s position on the local wildlife is the fact that their homepage carousels an image of ducks flying (this article’s lead image); those ducks are Eurasian Wigeons, an old world duck spotted occasionally along the Atlantic coast. Of the dozens of species of waterfowl attracted to the refuge, Frontier Stone picks one from a different continent to highlight how much they care.

Frontier Stone is claiming the project would have a $5 billion annual impact. The company would sell the dolomite and limestone dug up there to supply “local farmers with limestone to neutralize soil acidity, boost calcium for added nutrition & increased corn production.”

A hearing will be held in Medina High School on Tuesday, March 8, at 6:30pm.

A pair of ring-necked ducks in INWR, March 2015. Photo by Jay Burney.