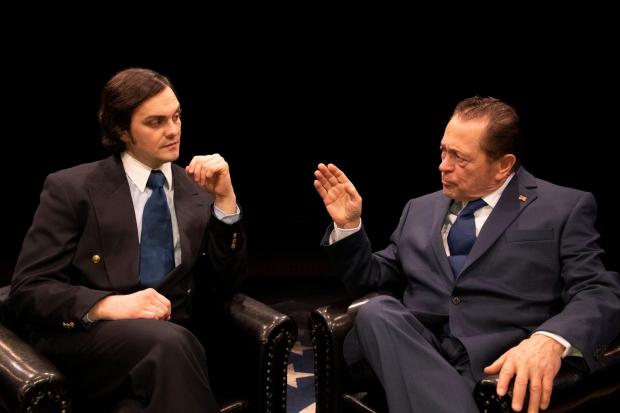 Sick to death of politics? I can’t say that I blame you: These days, who isn’t? But don’t let that put you off from the new production of Frost/Nixon at the Irish Classical Theater. Despite its subject, the man once reviled as the worst president in American history, it isn’t really a political play. Writer Peter Morgan has made a career delving into the people behind the public personas, from Queen Elizabeth (The Queen, The Audience, The Crown) to Idi Amin (The Last King of Scotland) and Freddie Mercury (Bohemian Rhapsody).

This glimpse into the soul of Richard Nixon takes place several years after he resigned the presidency. Eager to make his way back into the public sphere, with the first volume of his memoirs scheduled to be published, he and his advisors felt the time was right for him to give a substantial television interview. They accepted an offer from David Frost, the British celebrity journalist who was then at a career low point. Nixon assumed that Frost would be a milquetoast who would accept his self-serving stories without challenging them. But Frost, who bankrolled the six-hour program from his own pocket, saw it as an opportunity to regain his luster and prove himself capable of more hard-hitting subjects then the Bee Gees and Evonne Goolagong. And to succeed, he knew that he had to get Nixon to do the one thing he had thus far refused to do, to the chagrin of his enemies: apologize for the behavior that led to his resignation.

Morgan’s play evokes the metaphor of a boxing match (this was the era of the big-ticket Muhammad Ali bouts). The first half depicts the preparations for the event, while the actual interviews (filmed over six meetings) feel like matches, in between which the pugilists retreat to their corers to confer with their managers and trainers.

In a promotional film for this production, director Brian Cavanagh talks about the difficulties of adapting Morgan’s play to the IRC’s theater in the round. Having seen the result, I can’t imagine it being done any other way. With minimal scenery and various characters providing narration, the show is fast moving and fluid, almost cinematic in the way it moves from scene to scene without pause.

The greatest hurdle that Frost/Nixon has to face is the casting of two such well-known figures. Adriano Gatto doesn’t much resemble David Frost, but nails his slightly peculiar British intonation. Jack Hunter has the larger challenge of interpreting one of the most parodied characters of recent American history. He succeeds primarily by adapting Nixon’s guttural timbre and staying away from physical mannerisms. It’s a well-written interpretation, providing understanding but not begging for sympathy, and Hunter makes the most of it. He and Gatto work in perfect sync in bringing to life a chess match between two opponents who know less about each other than they think.