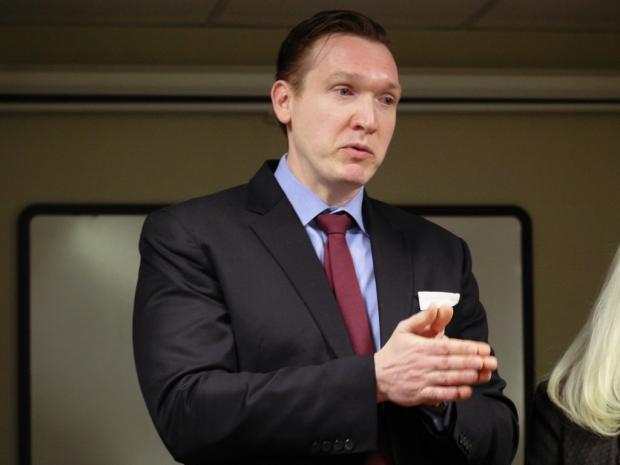 Democratic Congressional candidate Nate McMurray ran into Republican Congressman Chris Collins at an event last week, asked for a debate, and was rebuffed.
by
The Public Staff
/ Mar. 6, 2018 5pm EST

Michael Whalen, James McCarthy, and McCarthy’s unnamed younger brother, whose stories of child sexual abuse committed by a trusted priest were featured in an excellent Buffalo News story on Sunday. We’ve been reminded of it recently with the Florida shooting and the Larry Nassar trial, and we’re seeing it again in our own backyard: When ordinary people survive institutional failure, they become more powerful than the giant, well-funded institutions standing in the way of justice. Who is more credible, Emma Gonzalez or Wayne LaPierre? Aly Raisman or USA Gymnastics? Michael Whalen or Bishop Richard Malone? It takes tremendous courage to kick against power. We tip our hat.

African-American LGBTQ activists in Buffalo. We got it wrong last week when we gave Queers for Racial Justice credit for organizing a rally to honor the life of Tonya “Kita” Harvey, a transgender woman murdered last month on the East Side. While Q4RJ helped promote the rally and advocate for how Kita was misgendered by police and media, it was a smaller group of activists and close friends that organized the rally, and we want to shout out to them.

Congressional candidate Nate McMurray. The Grand Island town supervisor bumped into his opponent, Congressman Chris Collins, at last week’s Pride of Wyoming County Agricultural Dinner. McMurray approached Collins and asked him for a debate; Collins brushed him off. Watch the exchange on Alan Bedenko’s post for a good laugh. Kudos to McMurray for drawing out Collins’s bizarre combination of arrogance and cowardice.

Bishop Malone and the Catholic Diocese of Buffalo. While the local diocese has made an effort to make things right in the wake of the latest revelations of sexual abuse scandals, we suspect their response is more about public relations and damage control than accountability. The diocese has yet to disclose a comprehensive list of all priests who were suspected of offenses, the parishes they pastored, and the years of their service. Bishop Malone, who is from eastern Massachusetts and rose up through the ranks in the Boston area, has been surrounded by a culture of child sexual abuse covered up by church officials his entire career. He should absolutely know better. A soft cover-up is a still a cover-up.

WBEN and David Bellavia. A reader of The Public caught a segment at the end of Bauerle and Bellavia right-leaning radio program last Friday during which Bellavia did a prolonged segment about “how gay people talk.” It was described to us as “super awkward, uncomfortable, and inappropriate.” Curiously, the last hour of Friday’s (March 2) program was never uploaded to the station’s on-demand audio section. As we’d rather withhold judgment until hearing it ourselves, we asked for the audio. Station manager Tim Wenger responded to the The Public, saying he’d look into it, but we still haven’t received the audio file review nor a response about Bellavia’s alleged comments on air. In the absence of the audio, a big thumbs-down rushes in for the station, which our columnist Alan Bedenko has described a GOP propaganda machine.

Assemblyman Dave DiPietro, who, in his wisdom, sent mail invitations (paid for with tax dollars) to selected voters in his district inviting them to a “SAFE Act Forum” at the East Aurora Wesleyan Church this Saturday morning, March 10. While churches, as tax-exempt organizations, are banned from participating in political campaigns on behalf of particular candidates or parties, they are permitted to engage in voter education efforts—to host debates and forums, for example—so long as the efforts are nonpartisan. The subject of the forum seems, in part, overtly political (“the fight to repeal the SAFE Act!”) and, in part, informational (i.e. “information on Pistol Recertification”). Certainly, though, the panelists are all partisan: Erie County Sheriff Howard has said he would not compel his sheriffs to enforce the state’s gun control laws; Erie County Clerk Mickey Kearns and DiPietro have made criticism of the SAFE Act planks in their political platforms; and attorney Max Tresmond’s firm brought a lawsuit that sought to overturn the SAFE Act, and has handled other SAFE Act-related cases, always representing the interests of gun owners. Way to put the church where you worship in an uncomfortable spot, Assemblyman!