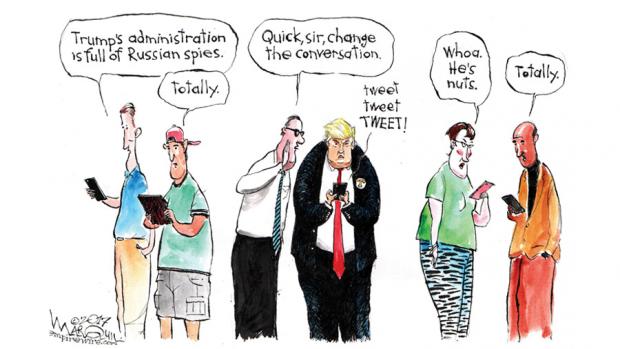 Shit in the game

For much of the past year I’ve thought that Donald Trump’s deep-dark-of-night tweets were just the grumpy ramblings of an old man with a limited vocabulary up for a prostate piss. I now think they’re more canny. They are, like his incessant lies, what in my youth people called “putting shit into the game.”

That’s when the game isn’t going the way you like, so you do something to destabilize the scene. In poker, you knock over a glass, requiring a new deck, or you arrange to have someone walk through the room who will distract everyone’s attention from the table. In a personal conflict, you introduce something having nothing to do with the issue at hand: “Yeah, maybe she did stop by when you were at work, but who put that dent in the car, that’s what I want to know. Yeah, who put that dent in the car? And where did that dent happen?”

Donald Trump is a genius at putting shit into the game. In the past week, four people close to him were found to have had heretofore unrevealed contacts with Russian officials and plutocrats during the presidential campaign. One of those people—Attorney General Jeff Sessions—denied under oath at his Senate confirmation hearing that he’d had any such contact.

But he indeed had such contact, at least twice. It was significant enough an issue that he had to recuse himself from protecting Trump in the most significant threat to his presidential legitimacy: the charge that Trump’s chief associates, and perhaps Trump himself, collaborated with the Russian government to destabilize the 2016 presidential election.

The press was up and running with the Russian connections.

Trump counterattacked. Starting at 6:36am on March 4, he let go a farrago of lunatic tweets attacking Barack Obama. It was all a page from Trump’s mentor Roy Cohn’s playbook: When someone attacks you for something you did, turn it around and attack them or anyone you can find. It’s all about distraction and deflection.

What’s worse: 1) that Trump’s closest advisers may have collaborated with the Russians to toss the election, that the Republican platform was altered to meet Russian demands, and that promises were made to the Russians if they helped Trump get elected; or 2) that Trump is totally fruitcake in his paranoid charges that Obama was staying up nights listening to his telephone calls?

Most of the newscasts Sunday focused on 2). Trump trumped.

His tweets were the stuff of gags in the press and on TV, but they deflected, at least for a day or two, the Russian question. That was, I suspect, the real intent. It wasn’t Trump being stupid; it was him trusting that the rest of us were stupid. He has based his career on that premise. Remember all those people who went bankrupt because he never paid them for their work, all the money he made, and continues to make, on other people’s losses.

Here are those March 4 tweets. I won’t [sic] them. If you find a misspelling, it is a misspelling by the current president of the United States:

Terrible! Just found out that Obama had my “wires tapped” in Trump Tower just before the victory. Nothing found. This is McCarthyism!

Is it legal for a sitting President to be “wire tapping” a race for president prior to an election? Turned down by court earlier. A NEW LOW!

I’d bet a good lawyer could make a great case out of the fact that President Obama was tapping my phones in October, just prior to Election!

How low has President Obama gone to tapp my phones during the very sacred election process. This is Nixon/Watergate. Bad (or sick) guy!

There is no factual basis for any of that. None. It started with hypothesizing by a freako alt-right news jock who got picked up by Breitbart News, and that got scooped up by Donald Trump. There was the president of the United States, with the most sophisticated intelligence-gathering agencies at his beck and call, babbling forth on the Internet because of information he gleaned from flights of paranoid fancy. (And he either does not know, or assumes his tweet-readers do not know, what McCarthyism or Nixon/Watergate were about.) That is the most generous interpretation. The more likely interpretation is that was the first part of him putting shit in the game to deflect our attention from the Russian connection.

The second part came Sunday, when he demanded that the Justice Department and the Congressional committees that may look into his Russian connections also look into the vaporware Obama wiretaps.

He demanded that the Justice Department and Congress come up with evidence that the imaginary Obama wiretaps hadn’t existed.

White House Deputy Press Secretary Sarah Huckabee Sanders (Mike Huckabee’s daughter), told ABC reporter Martha Raddatz, “If this happened…he is going on information that he’s saying has led him to believe that this is a very real potential, and if it is, this is the greatest overreach and the greatest abuse of power abuse of power that I think we’ve ever seen and a huge attack on democracy itself, and the American people have a right to know if this took place.” (You can watch the whole interview on YouTube.)

There is no there there, as Raddatz several times pointed out. In the full interview, it was Sanders mouthing one “if” after another. It’s all in Trump’s head, if it is even there. “The greatest overreach and the greatest abuse of power that…we’ve ever seen?” Nonsense. The argument that “the American people have a right to know if this took place” is an argument for Congress and other government agencies to spend months or years pursuing and trying to decorate a phantom.

Which Donald Trump and his staff know perfectly well.

There are no physical scientists in the Trump cabinet. That’s a good thing for Trump because any physical scientist, any scientist, would be compelled to point out to inquiring reporters that you cannot prove a negative. That is what all conspiracy theorists depend on. Science and journalism are grounded in what happened. So is truth. Conspiracy theory is grounded in what might have happened, things for which there is no evidence at all, only a “what if” question. What if the Big Bang started with two lobsters having martinis in Yonkers? And why haven’t they ever told us the truth of that? Yeah. What if?  Anything you say to a conspiracy theorist evokes a “yes, but” answer. That is why they are so boring and so inexhaustible.

As is this current early-morning distraction from Donald Trump. There is no evidence that anyone tapped his phones. None whatsoever. All he has to go on is an alt-right blogger picked up by Breitbart. And a game plan to put shit in the game.

And Mike Huckabee’s daughter saying, “What if?”

Even the FBI says the President of the United States has no basis for this claim. According to the New York Times, FBI Director James B. Comey, who helped sink Hillary Clinton’s presidential campaign (by raising, then dropping, the non-issue email foolishness days before the election), has asked the Justice Department “to publicly reject President Trump’s assertion that President Barack Obama ordered the tapping of Mr. Trump’s phones.”

It’s not clear at this point what effect, if any, Comey’s plea will have. Trump’s attorney general, Jeff Sessions, has recused himself because he misled the Senate, and no one has yet appointed anyone under Sessions in Justice with the power to say, “Yes, Mr. Comey, you’re right. This is foolishness.” So, it is, for now, all in limbo.

Save for the comics, who are all over it. Saturday Night Live has riffed for weeks on Trump’s Russian connection. This past Sunday Night, John Oliver danced on that and on the Trump tweets. Samantha Bee in this Wednesday’s Full Frontal will probably take him on as well. Andy Borowitz has a New Yorker satirical feed every day, sometimes more than one. Steven Colbert has gotten his mojo back savaging Trump for his lies, emails, and tantrums. Trump is an inexhaustible source of material for them. For all of us.

But, pause. Donald Trump may be a buffoon, but he is no joke. Some harms are irreversible. The damage he is now doing to the environment will not be undone. The people who will die because of his crippling of healthcare will not spring back to life. The children screwed out of a decent education because he embraces an educational economic model developed by the Mississippi White Citizens Council to avoid Brown vs Board of Education will spend forever catching up. This paragraph could go on and on.

Beware the laughter. The humor that exposes also narcotizes. We laugh at this clown, this fool, this liar, this cheat, and we’re done for the day. We’ve joined them in nailing him. And he is there tomorrow. And the next day. And the day after. They joke, satirize, parody, they strip him bare. We agree. We laugh.

And he continues tossing shit into the game. Congress flutters and does nothing. The rest of the world trusts us less, day by day. We have refugees with visas who are detained, kicked back, locked up, separated from their children. Artists and scholars from abroad are parked in airport rooms for eight or 10 hours, allowed to communicate with no one, prohibited from going to the toilet, denied water. And the membership fee at the weekend retreat he owns in Florida has doubled.

The people who voted for Trump do not read Borowitz, do not watch Oliver or Colbert or Bee. They still do not know or care that he lies without pause. The people who did not bother to vote last time sat on their collective asses because they did not read or listen critically, or think. What cause have we to expect they will take up those activities now?

In 1939, Charlie Chaplin made the best comic film any ever made about Hitler and Mussolini, The Great Dictator. Chaplin later said that if he had any idea how much evil they were doing he would not have made that film. The huge energy dissipated into laughter when he stripped them bare could, he said, have been put to better use. It could have been put into rage, into action.