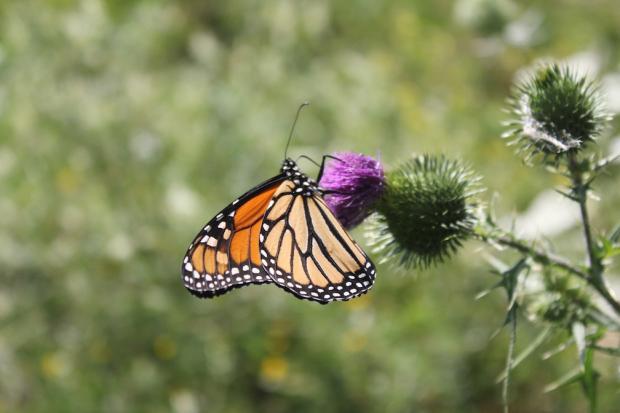 You may have heard that the United States Fish and Wildlife Service (USFWS) has decided to evaluate whether or not the familiar Monarch butterfly should be protected by the Endangered Species Act.

The evaluation comes as a response to a petition by the Center for Food Safety, the Center for Biological Diversity, the Xerces Society, and Dr. Lincoln Brower, renowned Monarch researcher and conservationist.

In the past couple of years the Monarch Butterfly population has crashed. There has been a 90 percent decline. They have almost vanished from Western New York. This species annually migrates from the northern US and southern Canada up to 2,000 miles to a small overwintering colony in Mexico.

There are several reasons for the decline. For years, the overwintering population that most of the eastern North American Monarchs rely on in Mexico was not protected. JIt was just 40 years ago, in January 1975, that Dr. Fred Urquhart’s team announced the disovery of location of the mountaintop overwintering areas of the Monarch in the northern Michoacan area of Mexico’s Transvolcanic Belt. Until recently, the habitat of that area was being transformed from forest to agriculture. In 1980 the site was declared a UN sponsored Biosphere Reserve and in 2008 it was declared a World Heritage site. This has slowed the loss of habitat and helped to repurpose the local Michoacan economy away from illegal logging and agriculture to eco-tourism and conservation. This has helped the monarchs, too.

Industrial agriculture has been recently pinpointed as a primary cause of the collapse of the Monarch population. Habitat loss due to agriculture is astronomical. The use of chemical pesticides and herbicides—including glyphosate, which is the main ingredient in the Monsanto product Roundup—is a significant contributor to this habitat loss. Roundup is found in many GMO plants that have come to dominate the food-growing industry, and is used rather liberally by landscapers, home gardeners, and others. Maybe you use it. It kills plants like milkweed that are beneficial to Monarchs. It directly poisons butterflies and many other organisms that make up parts of healthy ecosystems.

Glyphosate has also been implicated as an important factor in colony collapse disorder—the disappearance of honey bee populations. What hasn’t been talked about much, until the recent publicity regarding the Monarch’s disappearance, is the effect of this chemical contamination on other pollinator populations, including many species of native bees, butterflies, and birds. Many, if not most, of these species are in rapid decline. Last autumn National Audubon released a report “314 Species on the Brink” about the rapid decline of many familiar North American bird species, including many that are familiar to us in Western New York. This decline is due to habitat loss, chemical contamination, and climate change.

Our bi-national region is in the wheelhouse of the eastern Monarch range. What we have done here, and what we continue to do here, counts. Most of us have seen and experienced this beautiful butterfly. It is one of the signs of summer and fall. It breeds here, if it can find milkweed, which is the host plant that the caterpillars depend upon. In the autumn there have been reports of thousands of these migrating butterflies staging daily at places along the Outer Harbor, including Times Beach Nature Preserve. Here they rest after a flight across Lake Erie or the Niagara River on their communal journey south. Here they sip from late-season flowering plants to gain nourishment and strength for the long month or more migration that lies ahead.

Two years ago the Erie Canal Harbor Development Corporation created Wilkeson Pointe Park on the Outer Harbor. Part of the purpose of that park was pollinator conservation. Big signs greet visitors at the entry next to times Beach indicating that his is a “No Mow Zone” and that native plants, minimal maintenance, and no chemicals will drive nature to take its own course at this park. What a beautiful concept.

Last summer the ECHDC reversed plans. They announced in September that the park would become the location of condominiums and parking lots, and not so much a public place with habitat concepts. They day after they announced this, acres of wild meadows, at the time populated by migrating Monarchs and other birds and butterflies, were mowed to the dirt.

The story of the passenger pigeon and our local connection

Almost none of us living today have ever seen a passenger pigeon. It went extinct in 1914.

The passenger pigeon was the most common bird in North America and may have represented as much as 40 percent of the entire bird population. As with the Monarch butterfly, our area was in the wheelhouse of the passenger pigeon range. There are reports of billions of these birds passing over the Niagara River and Lake Erie in a weeks-long migration. What destroyed this population in less than 50 years? Development. Agriculture. Deforestation. Central and Western New York became the breadbasket of North America during mid 19th century. This was preceded by massive tree-cut for timber and farmland. Much of Western New York was turned to agriculture. This is why it’s just about impossible to find any old-growth forest in our region. Deforestation is also the story of Grand Island and the Tonawandas. Part of Buffalo’s early wealth was built on the world’s first industrial clear-cut of the oak trees that once covered these two areas. These clear-cuts decimated the local and regional habitat of the passenger pigeon. It flushed the birds out into the open, which made them targets for hunters who slaughtered them for feathers and meat.

The decisions that helped create the region’s wealth have caused great environmental issues. Our waterfront remains riddled with legacy contamination.

If we want to save the Monarch butterfly, we need to act in a responsible, common-sense way. And it really isn’t that difficult. This is not someone else’s problem. It is ours. What we do on the waterfront and in other areas in our region will help to tip the balance.

Why should anyone care, you might ask. Aren’t birds and butterflies just nostalgic notions and can’t we move forward with technology and innovation?

Biodiversity is the lynchpin of healthy life on earth, and this includes healthy human life. The quality of our lives and the reliance and strength of the economy depend on strong and healthy ecosystems, which are characterized by biodiversity. The Monarch is more than just a symbol of biodiversity. The “canary in the coal mine” has long ago vanished. Today we have an ongoing and continuous collapse of the ecosystems that support us. The Monarch is one of the more recognizable species.

We cannot afford to continue the unabated exploitation of our natural systems. Climate change and the collapse of our ecosystems stand in the way of human survival. We are situated in the Great Lakes, which contain 20 percent of the planet’s most valuable resource: fresh water. We are situated in an area that has historic and contemporary world-class biodiversity. We have the opportunity to find ways to survive. Saving the Monarch is a consequential local flag that we need to wave and wave aggressively.

WHAT YOU CAN DO TO HELP THE MONARCH

You have choices, profound choices. What we do today will effect generations to come.

Currently the USFWS is seeking public comment on how they should proceed. Comments will be accepted through March 1, 2015.