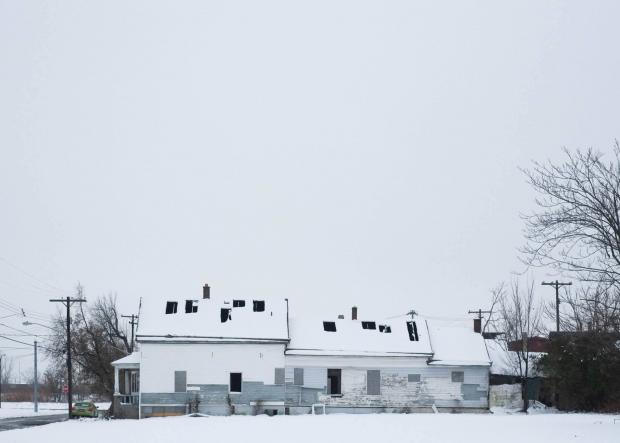 Like a catchy new tune hummed by somebody old, the urban geographers and academic economists look a bit silly as they amuse themselves by using references to brain-eating, undead, staggering cannibals when they write about broken Rust Belt towns.

Even the smarter-than-thou professors who describe Buffalo as a zombie city appreciate that within its bounds are functioning neighborhoods, even thriving urban villages. Successful cities are clusters of villages, with agoras, athenaeums, amphitheaters, gymnasiums, museums, and those other instrumentalities of urban life, our very words for which indicate their continuity with how ancient Athens worked.

To the annoyance of mayors from Byron Brown to Rahm Emanuel to Bill De Blasio, peer-reviewed academic research keeps finding the same data, the same patterns, that we report here. Every mayor wants to tell the tale of uplift, renaissance, resurgence, and success. Rahm Emmanuel, now fighting for his political life, reportedly despises the description of his Chicago as “one-third San Francisco, two-thirds Detroit.”

But nobody in any mayoral office wants to read the numbers that we read for the Buffalo-Niagara area, especially the ones about new-home construction. Data aggregated by the US Census, and generously shared with us by the good people at UB’s Regional Institute, show the pattern: of the 59,915 permits issued for new single-family homes constructed in the Buffalo-Niagara Falls metro area between 1980 and 2011, only 1,901 happened in Buffalo—home of the largest concentration of abandoned properties in the region. Over the same three decades, almost 8,500 new single-family homes were built in Amherst, around 6,185 in Lancaster, in Clarence 5,011 new-builds, in Hamburg 4,785, in Orchard Park 3,156, in Grand Island 2,556, West Seneca 2,150, Cheektowaga 1,764 and Elma 1,293.

In Niagara County, ditto: within the city limits of Niagara Falls, which is also afflicted with abandoned properties, there were only 219 new single-family houses built in the 31-year period, but out in the far-flung suburbs and exurbs of Niagara County (which, like Erie County, continues to lose population), the hammers sang: 3,187 new-builds in Wheatfield, the town of Lockport 2,346, Lewiston adding 1,083, Timothy McVeigh’s hometown Pendleton, just across Tonawanda Creek from Amherst, adding 1,033.

The fad of movie-fantasy horror imagery in scholarship really got going in 2012, when Silverman, Yin, and Patterson published a paper, “Dawn of the Dead City: An Exploratory Analysis of Vacant Addresses in Buffalo, NY 2008-2010,” in the Urban Affairs Journal. Since then the papers with zombie references keep a-comin’. Expert trend-spotter Richard Florida got into the act in a blog in 2012. Georgette Phillips did a paper in the Rutgers Journal of Law and Public Policy in 2014, “Zombie cities: urban form and population loss,” which she previewed as a Wharton School working paper the year before. Journalists generally miss the story’s complexity, as do planners and others who remain wilfully innocent of the devastating legal framework that keeps old cities locked within what David Rusk calls “little boxes,” i.e., the obsolete but mainly indestructible municipal boundaries that population, trade, and industry leapfrogged decades ago, but that continue to shape the sprawl dynamic today.

What’s good about these academic papers is that they help clear the fog of PR. And they’re just a teensy bit more readable, too.

But the story of how happy, resurgent, renaissancing Buffalo got to need renaissancing takes a bit of digging. (To renaissance: a brand-new transitive verb. I renaissance, you renaissance, s/he, we, they renaissance!) Doomsayers (not here, folks!) say that cities like Buffalo, with old housing stock, are going to have a very, very hard time getting renaissanced—which would be a laughable assertion in anyplace but America.

A smart blogger from Detroit links the fastest-declining Rust Belt cities with the age of their housing stock. Here’s his table of the 10 fastest-shrinking cities in the US:

Dedicated urbanists know, of course, that it’s not that simple. Pittsburgh has a truly thriving center-city area, where the new normal is rehabbing and renaissancing 1920s-era housing, because there’s been a robust, well-funded, well-led preservation movement there at the very same time that there was a robust, well-funded, well-led economic revitalization movement there, happily congruent with a built environment that put three universities, many museums, the medical center, and diverse housing opportunities within walking distance to downtown offices and, very nearby, the places where the Steelers, the Pirates, and the Penguins play.

Pittsburgh made its luck, and the lesson for Buffalo is to study up.

Legacies of quality, and of wreckage

In the 1920s, when a huge portion of the central City of Buffalo’s housing stock was built, palaces and hovels alike, four-squares and clapboard-clad frame two-flats and the lovely Upstate New York two- and three-story brick commercial strips (think Saratoga, the 500 block of Main Street, Canandaigua, East Aurora) were built in clusters near one another. They were everything that New Urbanists love: walkable, multimodal, diverse, adjacent. Buffalo in artist Alexander Levy’s heyday, between 1909 when he arrived here and the onset of the Depression after October 1929, was indeed a latter-day Athens, with many new mansions, thriving village shopping-districts, a robust city center, and, like Athens, with a tiny elite and masses of disempowered, fungible, barely native, largely unskilled workers who were nevertheless able to thrive here because, well, early-stage industrial capitalism was happening.

Before industries like automobiles and banking and heavy metals and food processing became oligarchical, there were lots of firms in Buffalo hiring lots of extra workers, and all those people jammed themselves together into a landscape of just over 40 square miles, next to a port that was incomprehensibly huge. We see that epoch’s shattered remains in the zombie parts of town, and still live in astounding comfort in the prior-to-the-current-renaissance renaissanced parts of town—but like the port, there are parts we cannot see anymore. Producing war materiel for both World Wars I and II, Buffalo became America’s leading airplane manufacturer—but that’s gone, utterly. Gone also: the dozens of institutions that thrived because of the relentless economic exploitation of women. A story awaiting a dissertation or at least an academic paper is how decades of the wage-less labor of thousands of women enriched this largely Catholic city, as masses of nuns, under a small directorate of similarly poor priests, worked for room and board operating the schools and hospitals that socialized and maintained all those workers in the brand-new 1920s built environment.

Buffalo became a city of zombie neighborhoods after its industrial economy’s collapse, a slow-motion process, to be sure, which rapidly accelerated thanks to Nixon’s tricks with the currency and the Supreme Court in the early 1970s. Communist and mob thugs had pushed Bell Aircraft out of Buffalo in the 1950s (though that Buffalo invention beloved of Monty Python, the hovercraft, was tested in the Bell Slip in the 1960s), and the pull-push of globalization and incompetent management destroyed the heavy-metals business here in the 1970s.

But the knife in Buffalo’s belly was sprawl.

So it remains. The sprawl knife cuts again and again, but it’s cutting the region’s vitality: Of the 59,915 single-family housing permits issued between 1980 and 2011, two-thirds were for houses built before the 20th century ended. There were 19,094 built between 2000 and 2011. Since 2000, Hamburg, Amherst, Lancaster, Clarence, Orchard Park, Grand Island have cumulatively seen 9,413 of the new-builds, about half of the total, with Weatfield, Lockport, and Pendleton accumulating 2,770 for shrinking Niagara County.

The sprawl dynamic is this: folks move farther and farther out. Folks abandon property inside the urban core, moving into the first-ring suburbs, especially Cheektowaga and western and southern Amherst. The first-ringers move out to the second-ring. The rate of construction is shrinking—40,821 new-builds in Erie and Niagara counties between 1980 and 1999, but just 19,094 between 2000 and 2011—but they’re still being built outside, not inside, the urban core.

For all the energy fueling the new apartment projects on Ohio Street, and loft development downtown, and West Side rehabs and the gloriously rapid Allentown and Delaware District real-estate appreciation, there are structures at work that continue to divert and diminish that energy. And east of Main Street, the zombie neighborhoods march on.

Schneiderman is pushing a program bill, the Abandoned Property Neighborhood Relief Act. Its aim is “to reduce the number of vacant and abandoned properties falling into disrepair across the state by informing homeowners of their right to stay in their home until a court orders the homeowner to leave, requiring mortgage lenders and servicers to identify, secure and maintain vacant and abandoned properties much earlier in the foreclosure process, and creating a registry of such properties to assist municipalities with enforcement of laws regarding property maintenance.”

The Attorney General is absolutely correct about the problems banks cause. But with somewhere between 16,000 and 20,000 abandoned properties in Buffalo alone, properties that have been documented as abandoned for at least a decade and sometimes longer, this legislation would seem to be more relevant to cities where things are not so far gone.

But wait. Let’s be positive here.

If you’re a West of Richmond homesteader, picking up a 1920s fixer-upper for a mortgage payment of $500 a month, you want Schneiderman’s bill to pass, and for enforcement to get funded—because chances are damned good, sadly, that there’s a house or two or five on your block that somebody has abandoned, and that some bank (probably local) foreclosed on after the go-go years of no-look mortgages—the time, just 10 years ago, that one local banker refers to as “those days.”

The renaissancing process, resting on our Buffalo comparative advantage of a big stock of sturdy, fixable-uppable 1920s-era houses, will be easier if Schneiderman’s bill passes.

Anything to ease the burden imposed by the relentless logic of sprawl…which is funded, and largely driven, by the broken logic of the Supreme Court’s 1926 Euclid v Ambler Realty decision; by the corrupt insistence of New York State’s town governments to do their own zoning, planning, and issuance of building permits; by the unwillingness of state leaders to force any effective consolidation; by the toothlessness of existing regional land-use planning bodies; and by the fecklessness of bankers who, rather than using their awesome and unparalleled power to shape the regional economic dynamic, merely profit from a system that thrives best (for them anyway) when perfectly re-useable real estate is abandoned in favor of new-builds.Toss in a little racism, the self-interest of politicians who thrive on ethnic and racial division, and the see-no-evil narcissism of folks who won’t challenge any of these destructive patterns, and voila! Voici! You get one-third San Francisco and two-thirds Detroit.

Except that for most of the Rust Belt, most towns, except Chicago, are Detroit—vast in potential, stunning in legacy, still anchoring their regions, but crossed, day and night, in every season, by the zombies whose numbers we count. Those 16,000 to 20,000 properties, out of 92,000 inside the city limits, are a structural problem that won’t go away by calling them movie names.

Will challenging the banks arrest the march of the zombies? Our response: So long as there is no regional land-use planning, then renaissancing Buffalo will be a piecemeal, village-by-village effort. The big movement is still outward. Sprawl continues to replenish our supply of zombies.