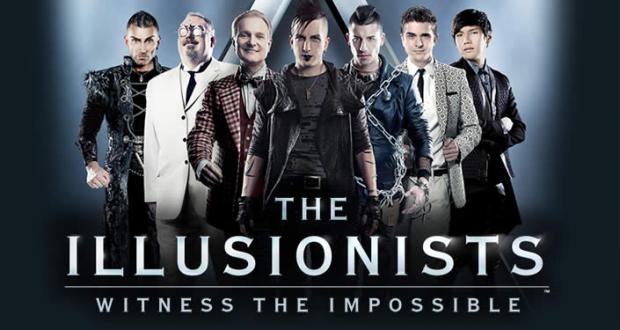 Illusions are hot right now. Like Hansel hot. If you were impressed or fascinated by #TheDress, then wow perfect luck for you, Shea’s has a whole line up of illusionists ready to take the stage this weekend as part of the roving magic show known as The Illusionists: Meet The Impossible. This Friday, March 6 through Sunday, March 8, seven of the world’s most talented illusionists will perform five shows at Shea’s Performing Arts Center that are certainly guaranteed to twist your mind in ways #TheDress never could. With names likes The Manipulator, The Futurist, and The Warrior, meet the seven illusionists of The Illusionists: Meet The Impossible.

Maybe the most theatric of the bunch, The Manipulator Yu Ho-Jin is also the quietest. Named the 2014 “Magician of the Year” by Academy of Magical Arts, his specialty is card manipulation, which means he can pull a card from… just about anywhere.

No gang of magicians is complete without a gothy, Chris Angel-type lurking in the background. Dan Sperry, The Anti-Conjuror fills that role for the Illusionists. He’s been described as “Marilyn Manson meets David Copperfield” primarily because of his heavily make-uped look and his propensity for pulling rabbits from his hat (though they’re not always rabbits, and sometimes his small intestines take the place of his “hat.”) As Howie Mandel put when Sperry appeared on America’s Got Talent in 2010 “It’s like I’m stuck in a Tim Burton movie.”

If weirdo-gothic magic is not your thing, then The Trickster, Jeff Hobson might be more your style. Hobson is the exact opposite of Sperry—with his Vegas-style act heavy on the cheesy showmanship. Despite his gaudy presentation, he’s usually the one to get the crowd laughing and keep them laughing throughout his set. It’s still up for debate, though, if that pouff of golden hair on his head is an illusion or the real deal.

For an escape artist, it only takes one mistake. Obviously the legendary Harry Houdini learned that lesson the hard way. That hasn’t stopped The Escapologist, Andrew Basso, though. The famous Italian escape artists considers Houdini his hero, but let’s just hope he doesn’t meet the same fate. His specialty: The Water Torture Cell (sounds like this guy might have a future as a guard at Guantanamo Bay if this whole magic thing falls through).

The mad scientist of the crew, The Inventor, Kevin James is also the magician most likely to bring some gore to the table. He’s the one who will dismember his victims…err… volunteers, and reassemble them before your eyes. He’s also kinda funny, you know, for a psychopath.

The Warrior, Aaron Crow is a modern day William Tell. But instead of a wooden bow and arrow, this ”danger magician” uses his carbon crossbow to pick the apple off of the top of his volunteer’s head while he spins on a rotating platform. Though he’s a wiz with a bow, he’s also pretty good with a paintball gun and a sword. And he hasn’t murdered a single volunteer yet!

Finally The Futurist, Adam Trent, is a triple threat: singer, comedian, and illusionist. But that’s not all: he also likes to play with technology, using video screens and futuristic devices to bend his audience’s minds and take magic into the 21st century. Or something like that.