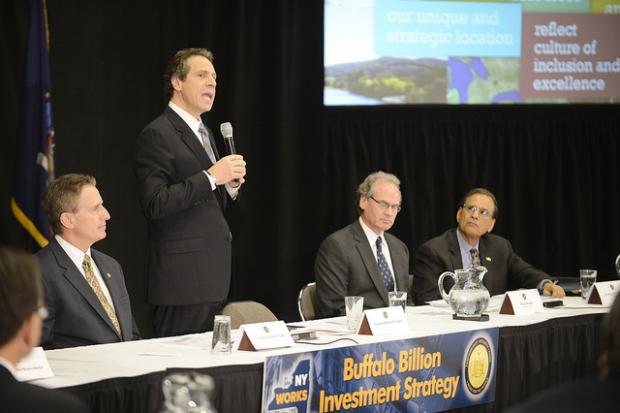 Buffalo’s billion is being divvied up mostly as state investments in private enterprise — things like Elon Musk’s SolarCity. How the money is being spent is reportedly opaque, and controlled by very wealthy, well-connected people whose charge is to transform Buffalo’s economy into, according to the Buffalo News,

a hub for clean energy research and manufacturing, as well as a center for medical genomics research centered around the University at Buffalo’s supercomputing capabilities. Another center would have costly and sophisticated equipment that would help some types of advanced manufacturers develop new products and technologies that they couldn’t otherwise afford to do on their own.

That’s all very forward-thinking and laudable, but average western New Yorkers had no real input into how the state investment was made.

Some of the billion will be used for infrastructure changes, such as redesigning Niagara Falls’ sad downtown, and removing a portion of the Robert Moses Parkway, but that’s a small fraction of the billion.

More glaring is the fact that Cuomo hasn’t come up with a Rochester or Syracuse or Binghamton billion.

During the 2014 campaign, Syracuse reporters were asking Cuomo why Syracuse didn’t have a billion, and Cuomo challenged the city to come up with a plan.

“I want to do the same with Syracuse,” Cuomo said today. “But don’t think I come and write a check and it happens. Because that’s not what happens. I don’t write the check until you have a vision and you have a plan”…

…To attract more state taxpayer help for the Syracuse area, the ideas and commitment from private companies have to be bigger, he said.

Winning communities, he said, have to be energized, coordinated and committed. “So I’m ready,” he said. “Are you ready, Syracuse?”

Syracuse is, evidently, ready, but its mayor, Stephanie Miner, has a radically different idea about how she’d use the money. More specifically, the state is staring at a $5.4 billion windfall from settlements with banks and other financial institutions, and trying to figure out how to spend it. School districts are clamoring for relief, at long last, from the Gap Elimination Adjustment, and Republicans in Albany want money for infrastructure improvement.

As set forth in this editorial, Miner would spend $851 million of a Syracuse billion to replace its crumbling water system. The balance would be spent on municipal broadband ($84 million), rebuilding roads ($48 million), develop newly created public space due to a reconfiguration of I-81 ($3.6 million), $10 million for schools, and a $3.34 million public market specifically targeted at Syracuse’s new refugee residents.

But the price tag for the new water mains has a modern addition:

At the same time, the city would create a natural chilled water system to cool buildings cheaply, efficiently and sustainably using the cold water at the bottom of Skaneateles Lake.

Miner’s ideas for this money directly benefit all Syracuse citizens by spending public money on public needs, like infrastructure and schools. It bucks Cuomo’s goals of public-private partnerships for industrial modernization. The Post-Standard likes Miner’s ideas, although its editorial board thinks it doesn’t go far enough,

It’s an “eat-your-peas” approach that aligns with Miner’s view of the role of government, versus the “shiny toys” approach favored by Cuomo and the Buffalo Billion.

Miner is right that investing in infrastructure gets government out of the business of picking winners and losers in its efforts to stimulate the economy. Infrastructure is a public good that enables and encourages economic activity. Government doesn’t create jobs; it creates the conditions for the private sector to create jobs.

The mayor is smart to capitalize on Syracuse’s distinct natural advantage — an abundance of potable water — and to piggyback on the existing paths that move it from Skaneateles to Syracuse. The question is whether “the best darn water infrastructure in the nation” is a boast worth making.

Whether by accident or design, the mayor’s plan leaves us wanting more. Think of it as an opening bid. Who’s willing to push her vision farther?

Frankly, wouldn’t it be prudent for a city to use a massive windfall to balance eat-your-peas with one or two big projects that could lead to a fundamental restructuring of its economy? This is without getting into how Cuomo’s handouts to upstate communities hardly puts a dent in the palpable damage that his hedge fund donors have done to those same communities.

But Miner makes a good argument — what’s the point, for instance, of building Syracuse’s version of Canalside if it’s going to be dependent on water mains from the 1890s?

Governor Cuomo has put up a $1 billion revitalization fund that upstate cities must compete for to receive. Business leaders have called on the governor to up the stakes to $2.5 billion.

There needs to be a good balance between direct state investment in capital projects, as well as public-private partnerships to jump-start anemic upstate economies. After all, it’s not like a complete rebuild of Syracuse’s water system isn’t going to directly benefit private contractors, as well.

But fundamental to remaking upstate, and a point that always gets overlooked because it’s far less sexy than Cuomo making it rain, is that Albany has yet to address things like making it easier and less onerous to start and maintain a business in New York State. It has yet properly to address the dysfunction of myriad stacked taxing districts and authorities that implement and make you pay for unfunded Albany mandates, over and over again.