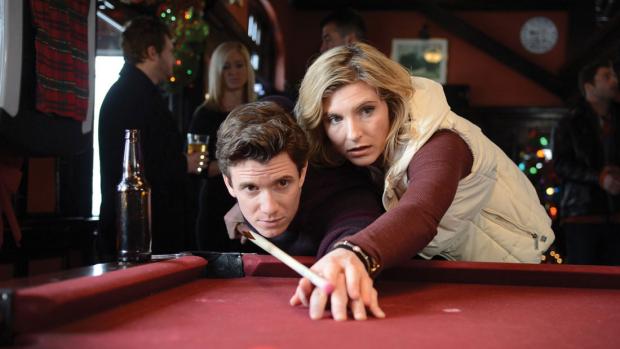 Talent, crew, and locations have been coming together in the Southtowns to create a classic, girl-meets-and-canoodles-with-prince fairytale set at Christmastime. The last week of February and first week of March a collection of businesses and sites in East Aurora, Colden, and Arcade have taken their own starring roles in the production of Small Town Prince.

Talent has flown in from Los Angeles and Europe, adapting remarkably well to shooting outdoors this frigid season. The crew is a blend of those who’ve worked together on other projects on the West Coast as well as locals, including this correspondent as set still photographer. Buffalo Niagara Film Office has worked to ensure that all goes smoothly with shooting at the selected, picturesque sites. Extras were recruited via social media.

LA-based Mascot Pictures, named for a 1920s-1930s film company that made B-westerns and serials, is helmed by colorful director/producer/screenwriter Fred Olen Ray, who favors cowboy hats, post-shoot cigars, and calls for “the martini shot.” Ray is directing the picture, working from his screenplay. He has made several Christmas-themed movies to date and says that they “have nothing to do with Christmas,” the season serving as scene-setter with its visual trappings. To date the independent film has no distribution deal and is slated to premier at East Aurora’s Aurora Theater this coming holiday season—an assured Western New York extravaganza.

“Oh my god, it’s nine o’clock,” says Fred, on set March 2, and so shooting commenced after the set dressing, light arranging, and camera positioning inside the diner. Mid-afternoon I would catch up with him after lunch to discuss working in the area. He learned of Buffalo and its expansive suburbs and exurbs after his son came to Western New York to work on the movie Battledogs in 2013.

“I initially looked at Williamsville, Hamburg, and Akron, but East Aurora is so centrally located. The crew can stay in a nice hotel and walk to a number of businesses after work. I’d like to bring another show here, there are so many visual elements here in one tidy package that are unusual to California. Shooting in Western New York is like having the world’s largest back lot at your fingertips. “

Rich Wall, director of operations for Buffalo Niagara Film Office, is a native of East Aurora. “This is the ultimate film commission success story in a way” he says. “This was a referral from Fred’s son. You bring someone to town and they’re able to get everything they want. Some of the crew and talent have gone to a Sabres game and gone skiing.

“We do permits for the whole project, and help the director and producers find out about our municipal assets—my knowledge of the town and what’s available helped. Today I’m helping facilitate a horse and carriage for the end of the week. It’s all detective work. And perpetuating our growing film industry.”

One of the film’s producers, Brian Nolan (whose mother is from Syracuse), has worked on both sides of the camera. ”Rich and Tim (Clark, film commissioner) from the film commission led us to East Aurora and the surrounding areas—they are so quaint and picturesque. The community has been so helpful and giving and made this production perfect, and snow was integral to the shoot.”

Aaron O’Connell adds, “The town has really embraced the production. In LA everyone is so used to it, people put up with it, but here it’s added to the whole Christmas-esque feel. I like being here. It was -27 degrees when I arrived last Monday night and so I went back to baggage claim, gave myself a pep talk, and came back out. In the cold the whole crew wants to work harder, it’s contagious, that attitude.”