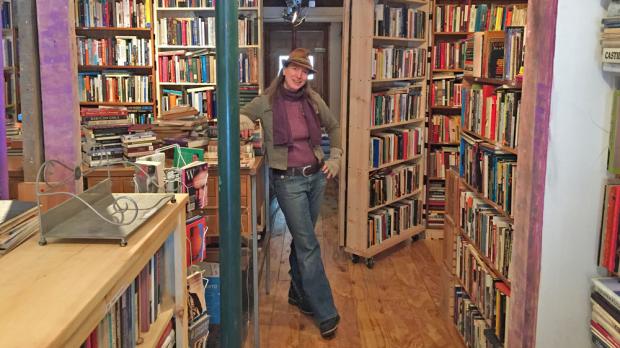 Everyone knows a bookstore is much more than a place to buy books—used bookstores, especially. You go to soak up the atmosphere as much as the knowledge lodged between covers. Rust Belt Books, as every visitor knows, is a special location in the universe. Soon, the store will open in its third incarnation in 20 years, this deep in Buffalo’s West Side, at Grant Street and Bird Avenue. In that time, it has served the community as meeting place, theater, safe haven, and cultural incubator.

Rust Belt Books founder Brian Lampkin started the first store on Lexington and Ashland in 1995, because “the store I needed wasn’t in Buffalo yet.” It was a solo venture, staffed by Lampkin and his wife, begun with used books sourced locally and wherever Lampkin happened to travel. Though tiny, the store attracted readers and writers alike, and poetry readings stuffed the place to capacity.

In 2000, Lampkin was invited to move to Allentown by Rick Smith, CEO of Rigidized Metals, who was renovating a large space with KEPA3 gallery owner and artist Peter Fowler. The adjacency to Cybele’s Cafe, Nietzsche’s, Theatre of Youth, and the College Street Gallery sparked a creative community at once. “It was a perfect time to move to Allen Street, and a whole scene began to coalesce there.” The bookstore hosted art shows, literary events, and happenings such as the Royal Flush Casino night (a response to the casino controversy in the city) and became a home to the Real Dream Cabaret, which ran oddball variety shows a few times a year, and special events like the Election Night Show. “It was great to bring life to the store, and to do crazy things together for no monetary value,” says Lampkin.

Rust Belt Books came under the stewardship of Kristi Meal in 2005, when Lampkin and his family moved to North Carolina. Lampkin states, “Because I knew it was in such great hands, I knew that anything that happened next would be good.” Lampkin opened a new bookstore/wine bar, Scuppernong Books, in December 2013, in Greensboro, North Carolina.

This January, Rust Belt Books made another significant move, relocating to its own building at 415 Grant Street, near Bird Avenue. “The bookstore couldn’t remain the same where it had been, so I had to ask myself, what do I want to do?” Kristi Meal explains. “Continuing to rent seemed untenable, and we had zero budget. We also had no idea where to go. But, I believe in destiny. ‘A building will emerge.’”

Meal considers the bookstore its own entity, noting “she is her own organism,” and affirms, “She told us what she wanted.” Regarding the trend of digital books, Meal is unconcerned: “I totally believe in printed matter and it has a brilliant future and digitalia is the means to make it remember itself and be even more better and reassume its position of unbridled transmission.”

415 Grant had been an antique store for many years, owned by the woman who lived in the apartment upstairs. Kristi Meal and Erin Verhoef (they prefer the term “stewards” to “owners”) purchased the building, and created a new interior space appropriate for displaying books. The store will also have a space for performance, as Allen Street did for the Cabaret and many runs of plays performed by the Brazen-Faced Varlets. Meal and Verhoef have already begun to engage with neighbors, and neighboring businesses: Gypsy Parlor and Zip’s Pizza. “Grant Street reminds us of Allen Street when we first opened. We’re ready to be in a place like that.”

Westside Stories Used Books owner Jeanenne Petri welcomes Rust Belt, not seeing them as competition at all. “I think they’ll be a great addition to the neighborhood. As residents of the West Side, I’m happy to see more locally owned, independent businesses opening up on Grant Street. It helps to add so much vibrancy to an already dynamic neighborhood. The more access people have to affordable books, the better!”

Rust Belt Books is now open, offering a “Thanks for Waiting” Special: 20 percent off everything until the Ides of March!