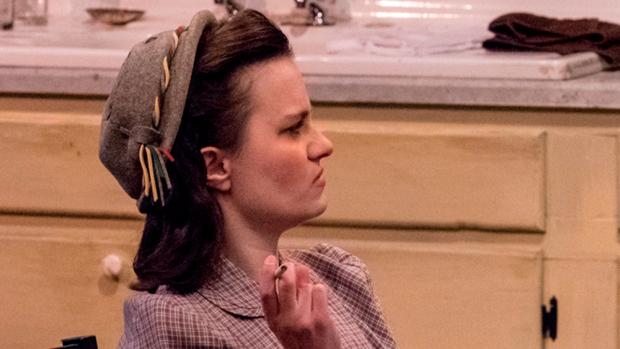 With a mischievous smile that can morph into a smoldering scowl in carefully calculated increments, Anne Roaldi Boucher has long been a mainstay of Buffalo’s acting pool. She can bring depth and complexity to a cartoon character, and has actually done exactly that, for instance, when she appeared in You’re a Good Man Charlie Brown at O’Connell & Company and snagged an Artie nomination for her efforts. Her current assignment, Christine, the long-suffering fiancée of a fellow servant at a grand English country house in After Miss Julie at the Irish Classical Theatre Company, provides the actress with a real opportunity to strut her stuff. The fortunes of her character evolve with her disintegrating relationship.

Significantly, after a career dominated by child roles, a consequence of her small physical stature, this diminutive dynamo is now getting opportunities to play grownups. While those child roles were grand, Miss Roaldi Boucher may finally have left her Anne Franks, Man-in-the-Moon Marigolds, Kindertransports, and Charlie Browns behind her.

After Miss Julie is an updated version of August Strindberg’s classic naturalistic tragedy about an upper-class woman and her fateful dalliance with a servant in her father’s home. In his retelling of the Miss Julie story, playwright Patrick Marber has transplanted the action from Scandinavia in 1888 to and English summer in 1945 on the eve of a historic Labor Party victory. While the sexual dimension has been heightened, the basic details of story remain unchanged from Strindberg’s original telling.

The Irish Classical Theatre Company production is quite remarkable. Under the direction of Fortunato Pezzimenti, the company is uniformly excellent, with Kate LoConti giving a truly extraordinary performance as Miss Julie, a woman whose discontent with her life torments her like an itching wool sweater worn inside her body. She is matched by dashing Christopher Evans, whose performance as John is astonishingly natural and believable. Anne Roaldi Boucher, however, is the link that holds the pieces of this classic drama together. And we are very pleased that she was willing to submit to The Public Questionnaire.

What word would your friends use to describe you?
Listener.

What quality in the character you are currently playing is most unlike your own personality?
Pride, which makes her feel superior to others.

What quality in your current role is most like your own personality?
Pride in her work.

When and where were you the happiest?
When my daughter was born and I was able to say, “Hello, Sofia” for the very first time.

What is your idea of hell on earth?
Always being tired, but never being allowed to sleep.

What is your greatest fear?
That I will screw up my daughter emotionally. But that’s what therapy is for, right?

Which talent do you most wish you had?
The ability to make difficult things look easy.

What superpower do you most wish you had?
The ability to slow down time—especially when I’m sleeping.

What would you change about your appearance?
I would be two inches taller so I could be five-foot. Is that too much to ask?

What trait do you most dislike in others?
Self involvement.

What do you most value in your friends?
Genuineness.

What quality do you most value in a good director?
Honesty—a director who will tell me what I need to improve, not stay silent or think they have to spare my feelings. I need them to be my third eye when I am not able to be.

What is your guilty pleasure?
Chuck—it is a horribly written show, but yet there is nothing better than curling up on the couch with my hubbie and watching an episode.

Who is your favorite fictional hero?
Jane Eyre.

Who are your real life heroes?
My brother. He is a Franciscan priest. He has given up everything, all his worldly possessions, and is dedicated to a life of service. He is the most peaceful and happiest person I know.

What do you consider to be the most overrated virtue?
Righteousness.

On what occasion do you lie?
To cover up an awesome surprise.

What was the subject of your last Google search?
Baked chicken thighs. Anyone have any recipes?

If you come back in another life, what person or thing would you like to be?
A 6’ 7” man. Just to see what it’s like.

What is your motto?
Live in the moment.