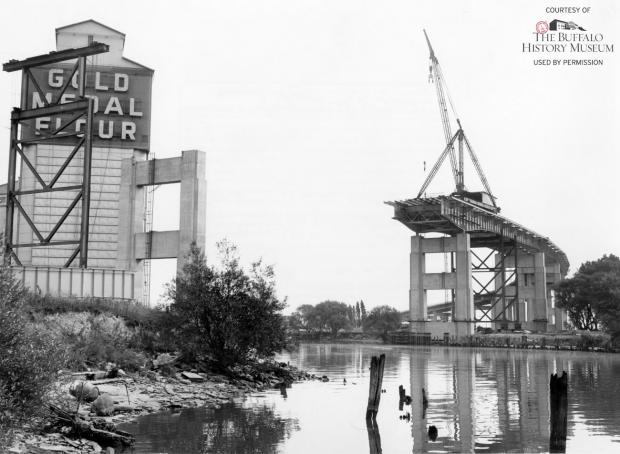 “It’s not only the best free joyride in town and a special pleasure to anyone who ever got tangled up in any of the traffic jams below—but also gives a completely new and breathtakingly sweeping panoramic view of what somehow seems a much greater city from ‘way up there.’” – Buffalo Evening News, October 20, 1955

The Buffalo Skyway was well on its way to completion when this photograph was taken by the New York State Department of Public Works in 1954, after four years of construction. Here, looking south from Kelly Island, a derrick-traveler crane—visible at the time to every Main Streeter looking south toward the waterfront—is staged for lifting a 202-foot girder that would span the City Ship Canal. The reinforced concrete piers—with engineer Edward P. Lupfer’s stepbacks, recalling a Hugh Ferriss sketch—already give an indication of the bridge’s soaring, vertical quality.

More than a mile long and 110 feet tall at its highest point, the Skyway cost $12 million to build, with more than 22,000 tons of steel and 10,000 cubic yards of concrete going into its construction. Its opening on October 19, 1955, was described by the Buffalo Courier Express as the “grand dream of a progressive, utilitarian, and lovely community here at the foot of the Great Lakes.” It was also the forerunner of a vast network of expressways that would cut through—and help destroy—Buffalo neighborhoods.

Today, the Skyway is likely the region’s best landmark of the monumental high-modernism of the 1950s. The bridge turns 60 later this year.