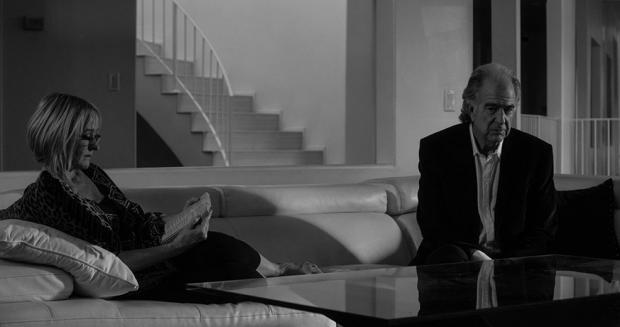 Anyone hoping that love gets gentler, surer and sweeter with age is in for a rude awakening with Love Is Not Love, actor/director Stephen Keep Mills’ impressionistic meditation on the struggle between fantasy and reality in a man’s romantic life.

Mills plays the protagonist Frank, a married man in his 60s. He spends the first reel of the film walking the December streets of Manhattan as we listen into the conversations of passersby unhappy with love. (The black and white film was actually shot in Los Angeles with actors in front of rear-projected images that evoke the artifice of early Hollywood.) Much of this time is devoted to a pair of construction workers (with bewildering Irish accents) who seek inspiration for their lives in the medieval myth of Tristan and Isolde.

Frank goes to the apartment of Reyna (Alejandra Gollas) for what initially appears to be a blind date. Although we learn that she is in fact a prostitute, the two become enamored, with Frank particularly besotted. Their visits continue (scored by music of varying dramatic effects), but reality eventually puts an en to their fantasy.

Reality is represented by Frank’s life with his wife of 30 years, Paula (Louise Martin). Their relationship, and his perceptions of it, are depicted as alternately mundane and mythic, with daily routine sharing screen space with director Mills’ presentation of Frank’s life as a Sisyphean quest or Shakespearian drama. Much of this is narrated by Joelle (Tonya Cornelisse), a street performer who occasionally breaks in to let us know things like “Man is alone. He walks in the desert of his desires.”

A university education isn’t necessary to watch Love Is Not Love, but it probably helps: the title comes from Shakespeare’s Sonnet 116, and the film is awash in literary and cinematic references. It’s not surprising that a Yale-educated actor making his directorial debut at the age of 72 will have stored up a lifetime of allusions to unleash on his audience, but in this case the result, as often compelling as it is exasperating, is a bit less than the sum of its parts.