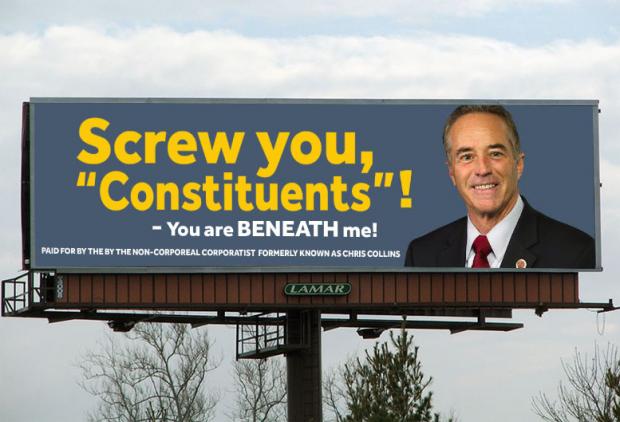 Luckily, the Buffalo News’ Rod Watson wrote this opinion column, so I don’t have to. Watson succinctly spells out why and how Collins’ refusal to meet with constituents in a town hall, (or other setting), is disgraceful and cowardly. In a nutshell: Collins works for us, but he doesn’t see it that way.

…Collins, the Clarence millionaire, explain[s] his refusal to hold town hall meetings by telling WGRZ-TV such sessions are “useless.” In fact, he explained, “They are not what you hope they would be, which is a give-and-take from people actually interested in getting some facts.

You see? Collins sees constituents as people who should dummy up and listen to him to “get some facts”. Never in his world could it feasibly work the other way around. Oh, sure, when someone’s kid gets into West Point or asks for Passport help or needs a Capitol tour, Collins’ office is as responsive as anyone’s; however, we’re not talking about constituent services — we’re talking about policy.

By the way, Collins has literally never held a town hall meeting, nor any other event for constituents that was open to the general public. How would he know whether it would be “useless”?

Collins is now a Trumpist — a branch of the Republican party that until recently I was calling “Palinist”. You may know them as the loudmouths formerly known as the “tea party”. They’re not conservatives in the traditional sense — they’re nativists; nationalists. They oppose free trade, environmental conservation and protection, and programs for the elderly and poor. They are for withdrawal from a world that they find scary or useless.

The primary purpose of a town hall is for the politician to listen. The aim is for him to get the facts from the folks intimately affected by government policy so that he has a better understanding of how his votes and the policies he pushes affect average people, not just those is in his income bracket.

Yet the guy Roll Call pegged as worth $23.8 million in 2015 thinks he knows all about your life without ever coming out to listen to you.

Imagine that. A public employee who lives in a million-dollar mansion believes he has nothing to learn from people who don’t. The median income in NY-27 is $55,000 per year.

A group of average constituents got together to demand a town hall meeting from Collins — over $7000 was raised for three billboards evoking “Where’s Waldo” publicly to shame Collins to meet with residents of NY-27 and listen to them.

Why? Because, for example, every time Chris Collins denounces the Affordable Care Act as a “disaster”, there’s a family in his district that is petrified that they’ll lose their health insurance and, in turn, be bankrupted by medical expenses. That family deserves to tell Collins its story to his face; he works for them. They deserve to experience the satisfaction of telling their representative what will happen if his policies are carried out.

Chris Collins’ constituents don’t owe him anything — he owes them everything.

But it’s all for naught. Collins isn’t going to hold any town halls, mostly because of the political math. He represents the most conservative district in New York, and he’s safe in his +7 (R). His last two Democratic opponents were unknown and not well-funded, so he cruised to re-election both times. His defenders always point to those electoral successes as evidence that Collins’ constituents are satisfied. More on that below.

But the opposition must have struck a nerve. If Collins was as safe as all that, the ragtag, poorly organized but motivated group’s billboards would have merited only silence as a response. Instead, the Republican establishment retained the services of crisis communications specialist Michael Caputo to push back. (He claims not to have been paid for this endeavor, and that he’s doing it for “fun”. Nevertheless, he acknowledges having given Erie GOP chair Nick Langworthy and Collins’ people a heads-up.) He started the GOP’s own billboard campaign, and here’s the text of the press release:

A billboard funded by an online fundraising drive will start to be displayed in Rep. Chris Collins (R-NY) district Monday, March 6 for a week — on the same Hamburg billboard where Collins detractors bought a billboard trying to force the Congressman to have his first town hall meeting.

The billboard art is attached. The location is 4536 Big Tree Road in Hamburg, New York.

“Sixty-seven percent of constituents in New York’s 27th Congressional District voted overwhelmingly to re-elect Rep. Chris Collins just a few months ago. Our simple and direct billboard thanks our congressman for a job well done,” organizer Michael Caputo of East Aurora said. “In fact, our billboard will be displayed on the same board where his opponents bought space last month.”

67% of constituents who bothered to vote — which was 66% of eligible voters — voted to re-elect Mr. Collins. My math might be wrong here, but 67% of a 66% turnout means that 44% of “constituents eligible to vote” re-elected Collins — the same amount who stayed home or didn’t tick the box. Not exactly the ringing endorsement being sold. Also, let’s not forget that people who are not eligible to vote, including kids, immigrants, and the migrant workers who seasonally toil in local farms, are all constituents. The population of NY-27 is 713,000. So, 220,000 people voted for Collins, given a Trump bump in turnout. That’s 30% of his constituents. Of eligible voters, 66% of the 66% who came out voted for him; fully 34% didn’t bother to vote at all. The results showed that, of ballots cast in NY-27, 25,500 of them were blank on the congressional line, meaning they voted for other offices, but didn’t bother with the Collins race.

The fundraising drive, hosted on GoFundMe.com, raised $1,700 in just one day — a testament to the strong support Rep. Collins enjoys in his vast district that spans across rural and suburban Western New York. The campaign was in response to a similar drive by Collins’ leftist opponents who have failed miserably to defeat him in three Congressional elections.

Collins barely squeaked out a narrow victory against Kathy Hochul in 2012; it was 50.8 — 49.2. Is that a “miserable failure”? I don’t think so. There were 66 donations made to Caputo’s billboard effort. Caputo says he raised “$1,700 in just one day”.  I hope a media outlet checks that before reporting it as fact, because GoFundMe shows that 66 people raised $1,732 over the course of a twelve day long campaign.

“Rep. Collins represents the most Republican district in New York, by far,” Caputo said. “The leftists’ failed effort to force him to have a town hall meeting was just an attempt to give marginal activists from outside the district a forum to scream at the Congressman — a theatrical production designed by national groups as part of a national leftist program. Needless to say, they failed.”

Now, Caputo is lying. I’m a member of the group that organized the billboard and as been demanding town hall meetings with our employee, Mr. Collins. It’s not “theatrical”, it’s not “marginal activists”, and they’re not from “outside the district”. This is a slander. Query why it’s necessary.

It’s necessary because the Republican strategy is to de-legitimize anyone who opposes them. Average citizens — housewives, teachers, fathers - who have organized a billboard campaign must be “marginal” professional outside agitators so that they can be dismissed and ignored. Caputo continues,

Well-funded national activist organizations connected to Barack Obama, Hillary Clinton and billionaire George Soros were behind thousands of AstroTurf groups across the country similarly harassing Republican congressmen when they returned home for their February district work period. Rep. Collins ignored the local contingent’s demands and, according to Caputo, won’t suffer a bit for it in 2018.

George Soros. When they invoke the name of the International Jew, you know they’re spooked. Well, I guess we’ll see about that. I’ve been involved in every congressional campaign around here ever since Tom Reynolds defended Mark Foley’s pederasty by trotting out a bunch of kids. Only in the Hochul vs. Corwin special election race did I see anyone from the outside help in a concerted way, and that was the DCCC. Not George Soros.

Here’s what Collins’ spokesman said to the Buffalo News about the anti-Collins billboard:

The left-wing activists, many of which reside outside of NY-27, organizing these publicity stunts will never be satisfied, despite having multiple opportunities to share their message,” McAdams said. “The fact is only three months ago, voters in NY-27 overwhelming elected Congressman Collins with 68 percent of the vote.

I guess it’s not plagiarism when you’re all working from the same script.

Here’s the billboard Caputo put together for the GOP:

So, first of all Caputo’s accusations of outside money AstroTurf (fake grassroots) related to the anti-Collins billboard is projection. Secondly, this GOP propaganda should be commended for finally putting in writing what Chris Collins truly thinks of constituents who disagree with or oppose him; they simply don’t count — they aren’t “real” constituents.

Caputo said on social media that it’s meant to be “snarky”.  It is, I guess. But Collins is already thought of as arrogant, inaccessible, and someone who doesn’t believe he has any duty or need to listen to people who might disagree. This billboard doesn’t help — it proves the very point “Citizens Against Collins” has made. In the battle of the billboards, Collins’ opponents are winning $7,000 — $1,700, and 3:1.

Perhaps Tom Dolina of the local satirical site the “Tommunist” put it best,