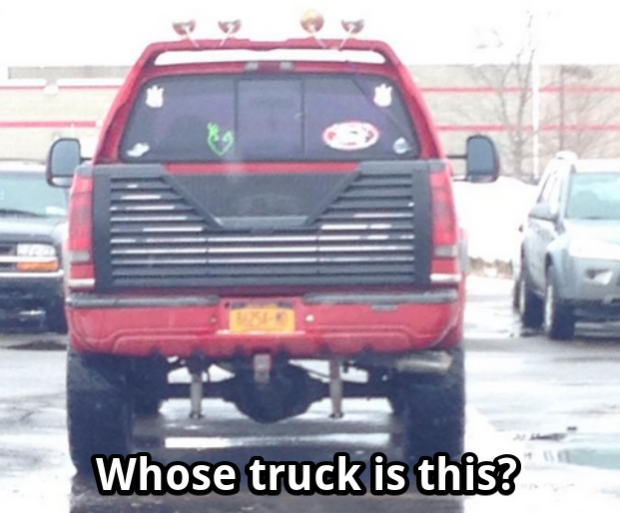 UPDATE: I spoke with Kyle Mast, the man shown in the video below. Without a doubt, Mr. Mast is having a bad day. To the extent people are contacting him directly to harass or threaten, you’re committing a crime and could be prosecuted. I gave Mr. Mast an opportunity to give his side of the story, and he obliged over the course of two phone calls.

He traveled to the Dick’s on Maple to check out see if there were any good sales. He is adamant that he did not intentionally park in a handicapped spot. He sometimes has a placard to use for his own family members, and is sensitive to the need for easy access for the disabled. When he parked there, he says he saw no markings on the ground or any signs or poles marking that spot as being for the disabled. If he parked in a handicapped spot, it was accidental and not intentional. He didn’t see that it was a disabled spot, and he would typically have apologized had he realized his mistake.

As soon as he got out of his car, Mr. Mast says Marcia Lynn began yelling at him, accusing him, “you can’t park there, you’re illegally parked” and making jokes about how his truck was overcompensating for something else; “big truck, small package” he recalls. Mr. Mast says he was “aggravated” by this taunting, but didn’t respond at all as he went into the store.

Contrary to the Facebook post’s allegations, Mr. Mast claims only to have been inside the store for about 5 minutes, not 30. He adds that, if he had been parked illegally for 30 minutes, why didn’t the woman shooting the video complain inside to the manager. He also says that Marcia Lynn was yelling at other people about parking improperly.

He says that, as he came back out of the store, the taunting resumed until he got into his truck. He was growing angrier because of the heckling, but also because he saw that Marcia Lynn was videotaping.  In a fit of rage — he says he was being “hotheaded” — Mr. Mast used a racial slur. He is sorry that he did that, and says, “it just came out”. He says, in retrospect, he didn’t even know or think Marcia Lynn was black, and was just trying to come up with the most hateful word he could muster. He admits that he wasn’t thinking straight, and was very upset because Marcia Lynn wouldn’t leave him alone.

In speaking with Mr. Mast, I detected genuine remorse for what he said and what had happened. He knows what he said was wrong, and that there were many other ways he could have either defused or ignored the situation — just driving forward was one of them. Mr. Mast let his emotions get the better of him, even though he knew he was being recorded.

Here’s a video from local Facebook user “Marcia Lynn”, capturing her encounter with the driver of a wildly conspicuous monster truck in the parking lot of a Dick’s store on Maple Road in Amherst.

Here is her story, in a nutshell:

So, a pig parker parks his Tonka truck in a handicapped spot for about 30 minutes, and when someone confronts him about it, he tells her to, “get a life” and, just before he drives off, calls her a “nigger”.

Here’s what his real-life Hot Wheels truck looks like: As always, you can email me at buffalopundit[at]gmail.com with any information / tips / etc .