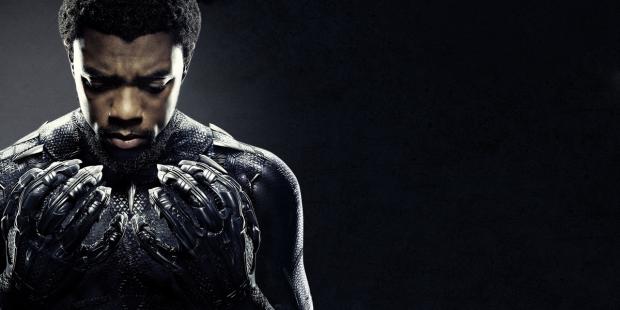 When Stan Lee and Jack Kirby introduced the Marvel Comics character T’Challa, a.k.a. the Black Panther, in 1966, he was the first real superhero of African descent. The Black Panthers adopted the name a short while later, a connection which inadvertently added a political layer to the character (a costumed crime fighter whose day job was serving as the king of the fictional African nation Wakanda). Black Panther maintained a steady, if unspectacular, career in comic books over the years, appearing as a supporting character in many titles and in multiple short-lived series of his own.

When the Walt Disney company began monopolizing the movie industry by acquiring as many other studios (and tent pole franchises) as possible, Black Panther seemed an unlikely candidate for mass consumption, not because of the racial and political aspects of the character, but because of his relative obscurity outside the comic book medium. But the studio execs at Disney/Marvel have been playing a long game all along, and their gamble has paid off. They introduced Black Panther as a minor character in Captain America: Civil War, and he will play a significant role in the upcoming Avengers: Infinity War. Black Panther is not only a monster success at the box office, it is a genuinely well-made and satisfying fantasy film. More important, it is the most culturally significant film to come from Marvel Studios—or Disney.

Wakanda appears to be a third-world country with nothing to offer leading nations, but thanks to secret technology developed from Vibranium—a metal which literally fell from the sky—the kingdom is actually the most sophisticated and advanced society on the planet. T’Challa (Chadwick Boseman), its king and protector, possesses mystical powers in addition to those granted by the giant cat suit he wears, which blends Batman aesthetics with Iron Man gimmickry. Wakanda and its inhabitants embody proud African culture with fantastical Kirby designs realized by CG wizardry. Trouble comes to town in the form of Killmonger (a buff Michael B. Jordan), a distant Wakandan raised on US mean streets who dethrones T’Challa and seeks to overthrow the rest of the world.

Black Panther is at its best as a fantasy film, and only feels familiar when it mines superhero material outside Wakanda. Director and co-writer Ryan Coogler earned the gig following his outstanding work on Creed, which followed his indie success Fruitvale Station. Although Black Panther never achieves the directorial virtuosity Creed did, Coogler manages the green screen, stunts, action and visual effects with aplomb, delivering a mainstream crowd-pleaser. T’Challa isn’t particularly interesting or flawed, but Boseman brings confidence and dignity to the role. Jordan’s Killmonger, who is more black militant than Lex Luthor, is the first worthy villain to appear in a superhero film since Heath Ledger played the Joker in The Dark Knight a decade ago. The majority of the cast is black, and their enthusiasm for participating in such an important film is evident throughout. Forrest Whitaker and Angela Bassett play wise tribal elders, while Daniel Kaluuya (Get Out) and Winston Duke (an immigrant from Tibago who attended the University of Buffalo) play younger leaders. Lupita Nyong’o, Danai Gurira, Letita Wright and Florence Kasumba play memorably strong females.

Black Panther is not the first black superhero to serve as the main character in a film: Robert Townsend played The Meteor Man for laughs in 1993, Shaquille O’Neal played Steel for schlock in 1997, and Wesley Snipes (who tried to make his own version of Black Panther) starred as Blade in a trio of vampire films. It is nevertheless a landmark entry in mass entertainment, one that fills a void that has existed since the beginning of cinema, and which will inspire an entire generation. That’s saying a lot for a glossy superhero film, but the significance cannot be denied.