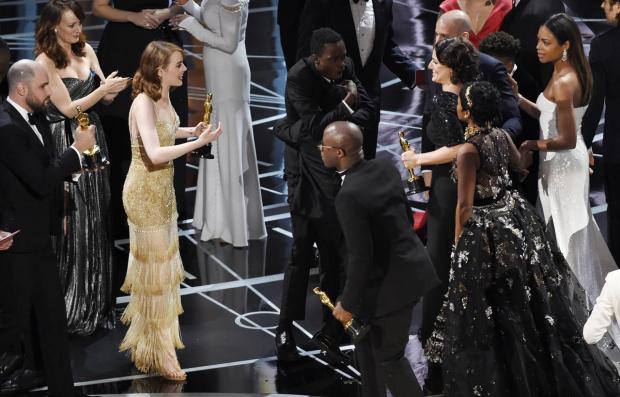 An Academy Award ceremony with a surprise ending!

Oscar ceremonies—for everyone but the nominated finalists—are usually matters of resolving mild curiosity rather than real human drama: Here are the candidates….which one will win…oh, that one won…When’s the Blu-ray coming out?

The various awards are separated by riffs from a host who is sometimes funny and entertaining (and sometimes neither), clips from the films, overdone musical numbers, and endless thanks to mothers, spouses, teachers, colleagues, and financial backers.

This year had the endless thanks. It also had a few very good speeches, particularly the one by Viola Davis. The musical numbers seemed better than usual, the film clips were much shorter than usual, and host Jimmy Kimmel did a fairly good job of not intruding on the show itself. He even wandered into the audience now and then.

2017 is the 50th anniversary of Bonnie and Clyde, a genre-breaking gangster film starring Warren Beatty and Faye Dunaway. So, the Academy chose them to present the Best Picture award. Nostalgia plays big in Hollywood.

All of that took 20 seconds.

The La La Land team came up to the stage. Two of the three producers—Jordan Horowitz and Marc Platt—speechified. When the third—Fred Berger—was at the mic, there was a curious flutter of movement behind him. Two people wearing headsets came out from the wings, one of them with another envelope. Berger turned to see what was going on, then ended his riff with a curious line, uttered at the same level as his previous lines: “We lost, by the way.”

That was two minutes and 42 seconds after Beatty opened the red envelope.

Jordan Horowitz reclaimed the mic: “What? You guys, I’m sorry, no. There’s a mistake. Moonlight: You guys won best picture.” He held up the card so the cameras could zoom in on it.

It took a few seconds for him to convince the Moonlight filmmakers that this wasn’t a bit of loopiness or a gag. Now, the principals of both films were on the stage.

Beatty got back to the mic and said, “I want to tell you what happened. I opened the envelope and it said, ‘Emma Stone, La La Land.” That’s why I took such a long look at Faye, and at you [the audience]. I wasn’t trying to be funny.”

Jimmy Kimmel, the evening’s host, responded, “Well, you were funny.”

The two groups of filmmakers on stage seemed genuinely to like and respect one another. There was a lot of hugging, none of which seemed the least bit phony. Jordan Horowitz insisted on handing off the Oscar himself. It was, as New York Times film critic A. O. Scott put it, done with “grace.”

Then the La La Land group moved off the stage and things proceeded as if nothing had happened.

But something had happened. It was great theater. It was real life, real time, real people, artists, engaging one another with respect and affection.

Monday’s newspapers and web sites were full of stories about what happened. The nastiest bit of work I saw was in the print version of the Buffalo News, where Jeff Simon initially wrote, “Wow. Talk about a community with bad luck. There, courtesy of Warren Beatty’s incipient senility was something we’d never seen before.” [Sic: He’s not only wrong about Beatty, but he’s a comma short].

(Either someone at the News noticed Simon’s astonishing ageism, or he read Monday’s New York Times and realized his huge error. The online version of the story was altered to read: “Wow. Talk about a community with bad luck. There, courtesy of Warren Beatty’s mistake or a bad envelope was something we had never seen before. But then, before the snafu there was more bad luck.” The online version never got to what the “more bad luck was.”)

What happened had nothing to do with Warren Beatty’s age or condition. It was, the New York Times reported, an error by PwC (formerly PricewaterhouseCoopers), the British accounting firm that has for 83 years tallied the Academy’s votes and handed envelopes with the names of the winners to the presenters as they were going on stage.

Current practice is to have two sets of envelopes, one on either side of the stage, each held by a PwC partner. That is because they don’t know which wing a presenter is going to use to enter the stage. The award given before Best Picture this year was for Best Actress (Emma Stone in La La Land). The PwC partner on the other side of the stage didn’t pull that envelope out of the queue, so instead of the Best Picture envelope, Beatty got a duplicate envelope of the award that had been announced a few minutes earlier. It had nothing to do with “incipient senility.”

Real-life, real-time drama wasn’t the only pleasure the PwC blunder gave us. It provided a distraction from our national disaster. For a few hours, we could carry on—via email, FaceBook and whatever else—with one another about what had happened in the Dolby Theater in Los Angeles Sunday night. We could talk about how a well-made film celebrating Hollywood was momentarily at the top of the heap, but then an astonishingly well-made film about race, gender identity, family, growing up, and all sorts of other hard stuff got to occupy that spot. It was a Cinderella story.

We could forget, or at least park in a deep part of our consciousness, knowledge of what is going on in our country right now.

When he finally got to make his acceptance speech, Moonlight director Barry Jenkins said: “Very clearly, even in my dreams, this could not be true. But to hell with dreams—I’m done with it, because this is true. Oh. My goodness, I have to say—and it is true, it’s not fake—we’ve been on the road with these guys [he meant the La La Land team at festivals and awards ceremonies] for so long, and that was so gracious, so generous of them. My love to La La Land. My love to everybody, man.”

Barry Jenkins got to have his dream come true. The rest of us are still living the nightmare.

We have a president who doesn’t read, who doesn’t have the attention span to get through a critical briefing memo, let alone a good movie. A president with a child’s vocabulary, who has never, to my knowledge, made an unscripted reference to any book or film or object of art. A president who loathes the First Amendment to the Constitution. A president who finds it reasonable to have an alt-right Svengali vetting his every decision, a secretary of education who loathes public education, a secretary of the interior who loathes environmental responsibility, an attorney general found unfit by a Republican Senate to be a federal judge…you can extend that list as well as I.

The conversations I had Monday about the wonderful, respectful, caring, and astonishing end of Sunday’s Academy Awards ceremony, all devolved to where we are now. The Oscars are over. Our brief vacation into the world of filmic art and partying and communal respect for people trying to do good work is over.

We’re back here in real time. Trump is still there. His appointees are still there. The Republicans in Congress are still dead silent. If you’re in Washington, DC right now, ethics is a word in a dictionary, and who needs a dictionary when we have a president with a child’s vocabulary?

Both teams on the Dolby Stage in Los Angeles were good guys. They were doing different things. The team that looked more deeply into the human heart won. The other team respected that.

We’re not going to have that in Washington, DC. Nobody with a headset is going to sweep in from the wings to tell us, “Oh, never mind: The right guys won after all.” We’ve got our work cut out for us.

Bruce Jackson has, with Diane Christian, been curating the Buffalo Film Seminars for 17 years. Their documentary films have been shown at the Museum of Modern Art, the Whitney Museum of American Art, on American and French public television and elsewhere. Bruce is SUNY Distinguished Professor and James Agee Professor of American Culture at UB, and editor-at-large for The Public.