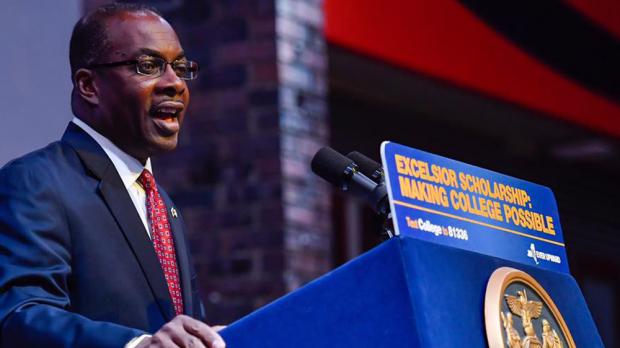 The US Census estimates that the population of the Buffalo-Niagara Falls metro area remains essentially flat, with a slight decline to about 1.13 million—almost exactly the same population as in 1970.

Of the nearly 60,000 building permits for housing issued by municipalities between 1980 and 2015, over 58,000 were issued in the suburbs, with fewer than 2,000 issued in the cities of Buffalo, Niagara Falls, Lockport, Tonawanda, North Tonawanda, and Lackawanna.

In sum, suburban sprawl continues to shuffle population from the urban core to the suburbs.

Here’s what to ask the candidates running for Mayor of Buffalo in 2017: Are you powerless to stop suburban sprawl, population stagnation, and the relative decline of Buffalo’s wealth?

The African-American population of the region is concentrated within the boundaries of the City of Buffalo, which contains the Census tracts with the lowest household income and the lowest workforce participation in the Buffalo-Niagara Falls metro area.

Here’s what to ask the candidates running for mayor of Buffalo in 2017: Are you powerless to increase the number of employed African-American men?

Changes in the regional workforce

Here are the employment sectors that have grown since 2009:

But the sectors where this region has lost employment are also significant:

Overall, the sectors that have recovered are the ones that rely most heavily on sources of business that many observers expect to change, especially:

Here’s what to ask the candidates running for mayor of Buffalo in 2017: Are you powerless to shape the regional response to changing long-term trends in federal spending, international commerce, and the shape of the regional workforce?

The City of Buffalo does not have direct control of the Buffalo Board of Education, whose overall budget is more than twice as large as that controlled by the Mayor and the Common Council.

The City of Buffalo’s elected officials are only able to propose and enact balanced budgets because of ongoing infusions of cash from the State of New York. That has been the case for more than a decade, but most pointedly since the imposition of a Fiscal Stability Authority by the State of New York because of Buffalo’s effective insolvency after 2004.

What the Mayor of Buffalo has actual control over has shrunk over the years. There’s a grab-bag of quasi-independent entities that handle water, sewer, and housing matters. The Mayor participates in, but does not direct, the Regional Economic Development Council. Managing downtown public spaces is mainly a matter for the Business Improvement District known as Buffalo Place. The Erie Canal Harbor Development Corporation, a New York State entity, decides quite independently of City Hall what happens with Canalside. The City’s list of unique functions has been radically reduced even since the post-Depression changes that regionalized social services, libraries, healthcare, and income-support programs to Erie County.

So without any say-so over regional land use, education, health, water, social services, or sole executive authority over economic development, and with the State of New York’s control board essentially acting at its discretion whenever it decides to tighten or loosen fiscal controls, the Office of Mayor is left to supervise public safety and streets through oversight of the Police, Fire, and Public Works departments.

So at this point in Buffalo’s history, a reasonable question to ask the candidates for Mayor of Buffalo is, actually, this: Why does this office continue to exist?

Bruce Fisher is visiting professor at SUNY Buffalo State a director of the Center for Economic and Policy Studies.