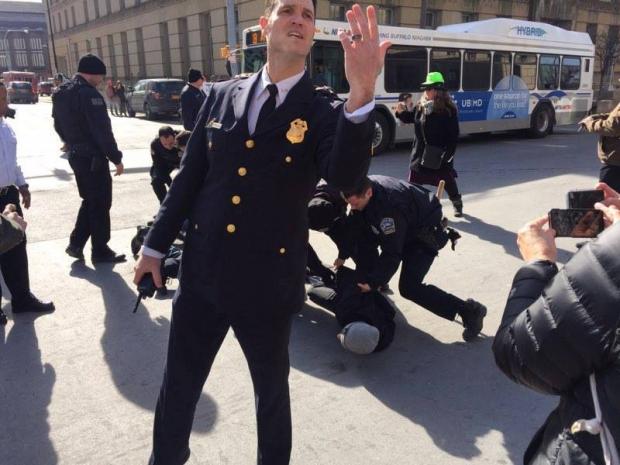 For black people, across the city, state, and country having zero power is the norm. I’m passed the shame and embarrassment of living under domination.  It’s a lot for me to sleep, it’s a lot for me to take a moment to care for myself. It was like that before Trump for me, for you I don’t know. It got worse, my ability to “behave,” after his first week. Then a black man “dies in custody” not five minutes from my home. That was it. I can’t police myself nor my thoughts any longer, the walking by as police terrorize the youngest and/or weakest amongst us, the careful and deliberate planning of polite words and tactics to be heard just a little. When there is no justice, when justice is something none of us have ever known or witnessed, that’s when I became ungovernable. When was it for you? Or when will it be?

The insanity has been going on since adolescence for some of us. Interacting with suburban teachers who teach you how quickly your ideas are unrealistic, and your thoughts and actions are inappropriate, your excitement to learn or play with your peers stifled, and if you DO NOT COMPLY, then suspension or expulsion is the reward you’ve won. Maybe that was the clue in your brain, like my brain, that you and I were ungovernable.

That’s just the classroom. Police with guns are here in the community to make sure you comply outside the classroom too. I knew that at eight years old when I had my first encounter with police power. Pistols and shotguns drawn on my classmates and their older friends outside the Red Sea corner store on Bailey. A line of black boys on their knees, hands-interlocked, and at the point of a gun: my first encounter with what terror looked like, up close and personal. All I could do was keep walking, and since then I’ve seen that happen and had that happen to myself more times than I can count.

Every interaction with the BPD can be your last interaction on the planet, and of course you have no say, no power or agency; either in your home or not. If they kick in your neighbor’s door today, they’ll stop you from peaking outside your own door, because god-forbid they be caught by a smartphone while they trample over their victim’s humanity. No power over whether you’ll be charged with resisting arrest for charges being arbitrarily made up on the spot by a racist in uniform who preys on the fact that you don’t know the law. And even if you did, the law does not apply to you or your skin. Maybe you were like me, at the age of 16 going on 17, when the BPD decided that around $300 was way too much money for a black boy to have. Might as well take it they figure, it’s not like I’m living from couch to couch and working at the nice and cozy Globe Market for two whole weeks. I’m sure they wrote a lofty report while the cops drive away laughing at a good score. “Pay police like your life depends on it,” means something very different to you and I, doesn’t it?

How on earth can you control and dominate our existence without sharing the wealth we’ve created for this society? Taunt us, in life and in death. The murders of sons and daughters never go answered, and before anyone gives the benefit of the doubt to the victims of state terror, the dominant white world around us has come up with a million reasons to celebrate the destruction of our lives, or at minimum downplay it away. What does it mean to be ungovernable? I just know what it feels like, what the confusion of state terror and systematic poverty has done to me as an individual.

We have all been conditioned and trained to be passive and submissive to our overlords, either at work from bosses across all fields; or in the street from newly energized and openly hostile racist with varying degrees of power, power that can be exercised against us all the way from verbal abuses, credit and job denials, threat of force, use of force, and in the case of the police; our most immediate and persistent aggressor, “deadly force.”

Deadly force, an American term that we’ve all grown familiar with. A comfortable, safe, and easily digestible way of calling it what it truly is: extra-judicial killing, state terror, or just flat-out murder. Last year, 266 black Americans were killed by the police who never saw consequences. And now we have Wardel Meech Davis: born, raised, and slaughtered in Amerikkka.

It’s not fearlessness that makes me feel ungovernable, rather the complete opposite. I’m doing all my human brain can do to resist. When protesters block streets or shout down elites who rule us like feudal lords, we aren’t being fearless or even courageous. It’s just simple human nature to resist subjugation this vile. Injustice after injustice, death after death, another fit of hunger before payday; that’s the mentality people like myself have snapped into. Is this what led our parents and grandparents to do the same thing? Is this ungovernability the same discomfort that made our people fight and die for the scraps we have in front of us now? Is this what it takes to be heard, to be treated with dignity and not have our human rights violated daily?

Waking up in the morning sore but happy. Miserable and comfortable. Knowing that at the end of the day, my life—like your life—is in the hands of a killer cop. This might be why some of us are waking up with this new ungovernable mind. A mind that is governed by the knowledge that they can do to you what they did to Meech. Like what they did to India Cunnings, Robert Metcalf, and too many other people for anyone to name. It’s a mind that challenges this betrayal of human dignity. It’s a mind that stays up late thinking of how to resist racist domination with as much disrespect to our oppressor as my mind and heart can muster. It’s a mind that understands the privilege of seeing the sun, and knowing that one day it can be you who is today’s arbitrary police murder in America.

I don’t know, and I doubt anyone has an absolute or definite answer of how best to resist this racist regime, from Pres. Bannon/Trump down to our local serial killer-sheriff Howard, or for that matter, the B-district police; the cowards that are known for abuse after abuse and can now add Wardel Meech Davis’s death to that track record.

What I can tell you is the feeling in the mind, the new mind. The mind that didn’t simply adapt to insanity but challenges it. Challenging this racist regime in the small ways and large. Grinding your teeth or the pavement, just resist. It’s natural and feels like you imagined it would, liberating. How you resist, how and when your brain switches to ungovernable is in each of you separately. Either you can live and be free or be bought and sold, if you’re going to “die enormous or live dormant, you just like I have no choice in the matter. Sooner or later, this virus will catch you too and ungovernability will keep you warm at night too.