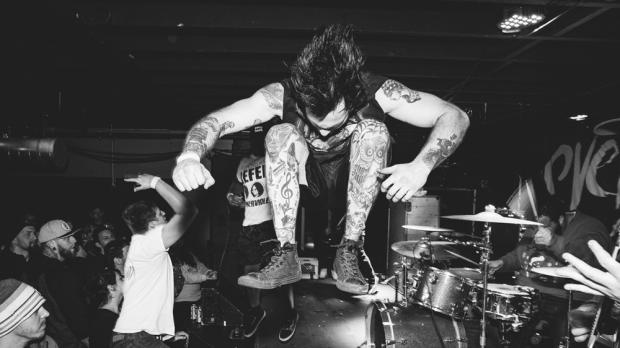 There’s a donut place next to the warehouse at which Buffalo hardcore band Burn Book practices. It’s a 24-hour donut shop, which comes in handy when the band has to leave at the crack of dawn for a show in Philly or Cleveland and they need to charge up. Donny Arthur, the band’s guitarist and main songwriter, usually prefers the gigantic apple fritters. Singer Derek Bajdas likes the more modest “sour kreme” donuts.

Today we’re sitting in Donut Kraze to have a chat about their band and their upcoming show at the Waiting Room this Sunday, March 5, with the Dallas-based thrash band Power Trip.

“They’re one of my favorite bands,” says Arthur of Power Trip. “It’s like you took a time machine and saw Slayer in the beginning. That’s the vibe that I get. It’s really authentic ’80s crossover thrash with a modern hardcore twist to it. I’ve seen them play a couple times and it’s always outrageous.”

The donut shop is also across the street from Arthur’s and Bajdas’s place of work, the Brighton-Eggert Pharmacy, which Arthur’s family owns. Bajdas, who is a compounding pharmacist technician, is actually still in his white lab coat when we pop over to the donut shop for a quick sour kreme. Arthur, who works at the pharmacy and is also a professional tattoo artist, is dressed in a snappy shirt and tie. Tattoos peak out front under their shirt-cuffs and collars. In fact, tattoos are how the two met.

“Donny was actually tattooing me one day, and he was like ‘Wanna try out for a band?’ and I was, like, ‘Sure, man!” says Bajdas.

Arthur, who tattoos at Holy Ground Tattoo shop, was commissioned by Bajdas to do a large cover-up on his chest. The piece took about two months, so the two had plenty of time to chat about tattoos and music.

“I sit terribly, says Bajdas. “So I talk a lot when I get tattoos. I probably chewed up an entire roll of paper towels.”

Between needle strokes and winces of pain from Bajdas, Arthur took the opportunity to recruit him for the project he’d been writing music for, which would eventually become their band Burn Book.

“I’m hip to the scene. I pay attention to what is happening with other bands and stuff,” says Arthur, who today went with the blueberry donut instead of his usual apple fritter. He says he doesn’t know if he can tackle something “of that magnitude” right now.

“I knew he was the singer of this other band and just got the right vibe from him. At that time I had written this record and I was looking for a singer, and I talked to a few people and nobody really had the enthusiasm that Derek had. This dude hit me up every week for like six weeks, like, ‘Yo, what’s the deal with this.’ We got into the studio and laid down the first track and immediately I was, like, ‘Yep, this dude is the dude for sure.’”

“Not only is he a really amazing drummer,” Arthur says of Walker, “but he has just like a really good comprehension of the genre, and how to write appropriate parts for the sound. The chemistry has been really good.”

Their bassist, Christian Adams, recently left to join the pop-punk band Cute Is What We Aim For on tour, and before Walker joined the band, their drummer Mike Hanson, who some might know from the band Pentimento, left to play drums with the popular emo band Reggie and the Full Effect.

“It’s cool. The lineup is finally taking shape,” says Arthur. “We bought a van recently. I’m pretty much a lifer in this shit. I’ve been doing this forever. I took some time off in my 20s to get some other stuff situated.

“My wife is a saint for tolerating it. She’s super cool, always really supportive. But that’s the thing. I really haven’t found anything that I’ve done in my life more worthwhile than playing music. Tattooing is definitely a passion, and that’s something that’s been pretty consistent for me. Music was something that I had to put on hold and I missed it every day. I really wanted to desperately to do it again. No matter how old I get I care about music and I care about this city.”

The band, which formed in 2014, cut a demo that year. It’s three songs of gritty, raw hardcore that runs a grand total of five minutes and 44 seconds long. That’s their style, though—get in and get out. Their songs rarely run over two minutes, almost never into the three’s, and their live sets usually last only 12-15 minutes.

“First rule of showbiz is to leave the crowd wanting more,” Arthur says with a grin. At the same time, the set limits are kind of a thing of necessity since their live show is also pretty physically demanding.

The band’s latest single, “Machine”—82 seconds of feedback-fueled hardcore anguish—was featured on the popular hardcore music website Lambgoat recently. The site is notorious for having a community of savage commentors, but the band were happy to see that they were left relatively unscathed.

“I think the worst comment was ‘I want that 82 seconds of my life back,’” says Derek, laughing.

“Lambgoat in particular is the king shit of music blogs. It’s a hotbed for internet trolls. Surprisingly it wasn’t that horrible. Usually they’re like wishing death upon every band,” says Arthur.

That leads the two musicians into a conversation about the band’s quick and brutal style, which might seem foreign to those who don’t listen to much metal or hardcore music.

Bajdas expounds on that: “When I listened to music as a kid, like Lamb of God, bands like that, I always looked for the heavy part. That 30 seconds or minute. That’s why Burn Book is super duper fun for me, because it’s trim the fat, it’s punch you in the face and we’re done.”

“If every instance of it isn’t invoking a response of some kind, whether it’s ‘Man I wanna go crazy,’ or this or that, that’s what it’s all about,” Arthur says before pausing. ”I love all genres of music, but it really has to evoke a response, whether it’s something really catchy and I want to sing along, or if it’s really emotional.”

Even a response like “I want that 82 seconds back,” isn’t so bad to them. At least someone is feeling something.

“At the same time, you can listen to our record and judge us,” says Bajdas. “But come see us live. It’s a completely different party.”

Looking at the empty trays where our donuts used to be, I can’t help but make note of the paradox these guys live. White lab coats and ties by day, frantic hardcore band by night.

“I think that’s 100 percent reality. I’d love to be punk as fuck all of the time but unfortunately, we have no delusions. Even if we were the biggest band in the world in this style of music we’re playing, it’s never going to be lucrative, we’re never going to be able to buy a house off of it or do anything like that. We are forced to have one foot planted in the real world and one foot planted in this hardcore dream world,” says Arthur as Bajdas nods subtly in agreement.

“I think that’s part of what makes the music so sincere. Like, if I was just able to hang out and do whatever I wanted all the time, I’d have nothing to be angry about. So really, we work this job during the day. We all work real ass jobs, then we get a chance to go out on the weekend or take a week off and do a mini tour, and it just makes it that much more worthwhile. Our band is a piece of junk, it’s your standard hardcore punk band, but when I get in there I feel liberated.”