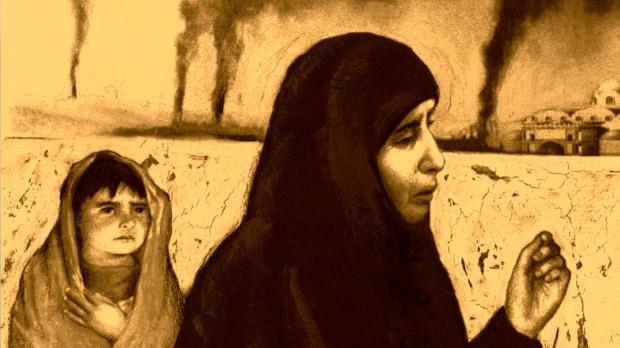 Question: How many artworks would you guess could be displayed at once in the tiny gallery—floor space about nine feet by 12 feet, three display walls—in the Canisius College library? Answer: 42, if the artworks are tiny enough, as in the current show, Small Works by WNY Artists from the Gerald Mead Collection.

The most intriguing—I thought when I visited the exhibit, but later came to appreciate even more—is an ink on paper drawing by Joan Linder, called Protoceratops. Intriguing because hard to tell just what this straightforward enough representational work is depicting. A little herbivorous dinosaur with facial horn and neck frill, according to internet entries on the creature. But about all we see of him in the drawing is the end of a horn sticking out from a kind of leathery more or less fitted garment covering him. But distinctly, somehow—the leathery garment—an origami item. Not actual origami—three-dimensional construction from folded two-dimensional paper or such material—but origami drawing.

What a wonderful little artwork, I thought. In the virtuosic rendering technique. In the enigmatic quality of the piece. In the origami aspect of the piece. How wonderful origami as an art form. About transformation from simple to complex. Two dimensions to three. By the simplest of means, folding paper. (Even faux origami, in a drawing. But faux origami maybe more complex than ever. Two dimensions to three back to two again.)

But then that evening—by chance and good luck—turning on the television to watch whatever for an hour or so before going to bed, I happened on a Nova series program on—of all things—origami. Not elementary origami as pastime—but always with origami there’s the elementary idea, from elementary to complex—but origami projects of professors and grad students in math and physics and chemistry and biology at the likes of Harvard, MIT, and Johns Hopkins. On topics ranging from configurations of viruses—thwarting them with lock and key complementary disabling configurations—to designs for space station apparatus, all based on specifically origami methods and procedures. Folding and unfolding. And progress on a book-length mathematical formula for creating any three-dimensional form from two-dimensional material—any form—just by folding. The idea of three dimensions as logical and actual—in the natural world and technology—emanation of two dimensions.

Another wonderful work in the Canisius show is Coni Minneci’s little Niagara Falls view, with particular attention to the sky above the waterfalls. The mixture of two kinds of clouds, the mist that rises perpetually from the crashing waters, and regular weather cumulus clouds passing over. And mix of rainbow colors, not as distinct arc rainbow but variously permeating the mixture of cloud types. And superimposed on the nature depiction, some artifice. A trestle structure of fine lines, suggesting a bridge, then a prism optical device to make rainbows. The artifice equivalent of mist and clouds.

Probably the smallest actual work is by Esther Niesen who constructs exquisite facsimilies of insects from bits and pieces of cut and collaged filmstrip. Beetles in this case, in vehement to the point of violent amorous encounter. The piece is called Kama sutra #2.

And by the late Jackie Felix, a tender homage work to the late moviemaker Federico Fellini. In a kind of La Strada mode. Subdued pictorial style and muted colors. A white chicken in a window, and a woman dancing to music from a trombone we see only the slide segment of.

From Craig LaRotonda, a quietly pathetic snapshot in acrylic and collage entitled Baghdad Morning. A woman and a small boy looking homeless and hopeless, a building behind them going up in a column of black smoke. About the last war, but a reminder of our current shameful gran rifiuto attitude toward refugees.

Among other works, some delicately stitched-together ginkgo leaves by Hillary Fayle. A paint and ink cartoon drawing layout of a slave ship—bodies packed in the main hold like sardines, a separate space for deceased still undisposed—by Dana McKnight. A recollection of times past mixed media collage by Joyce Hill.

A number of abstract works as well, but abstract art—as a generality, not a universal—is disadvantaged by smaller size. Abstraction needs more canvas. Room to stretch and breathe.

More on the Protoceratops. So appropriate to have an image of this saurian—albeit under wraps—displayed at Canisius. Whose fossil bones have been hypothesized to have inspired the conception millennia ago of the mythical creature the griffin, the Canisius mascot. (An hypothesis pretty thoroughly debunked, however. See palaeontologist Mark Witton, “Why protoceratops almost certainly wasn’t the inspiration for the griffin legend.”)