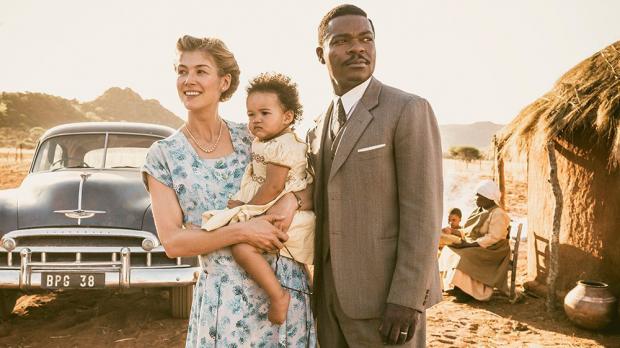 Bear with me here, but I’m trying to overcome a bad habit. Anytime I review a film based on historical events, I feel compelled to do some background reading on the subject first. Unfortunately, this is not as good an idea as it sounds, as I have had ample occasion to discover in the past decade, when the phrase “based on a true story” has opened so many movies.

Here’s the problem. Truth may be stranger than fiction, but it isn’t nearly as well organized. To make a self-contained film that holds the viewer’s attention for a few hours, it’s invariably necessary to shape the material: Build up the parts you want to emphasize, trim away the distractions, smooth out the rough edges. Sometimes you have to add things that didn’t happen to clarify the ones that did.

This is an important issue because it is so likely that a film about a “true story” will become the popular perception of that event. A conscientious filmmaker will presumably weigh that balance as part of the creative process. But not all filmmakers are conscientious; nor do all of them weigh properly.

The reason I’m droning on about this before telling you about the new movie A United Kingdom is that it seems to me a losing battle to make augmentation and possibly correction of the historical record part of a movie review lasting a few hundred words. Am I doing anyone a favor by pointing out how much invention is in Hidden Figures to audiences who haven’t seen it yet? Not from what they tell me.

So I’m just going to tell you that A United Kingdom revealed to me an interesting historical incident of which I was previously unaware, tying it to some broader historical issues that are continuingly relevant. Later I’ll do some reading about it to see how accurate the film was, which I assume is what you do as well.

In London in 1947, Ruth Williams (Rosamund Pike) is a government typist enjoying, as are the rest of her countrymen, the end of the war. Her sister takes her to a party at a missionary society where she meets a handsome young law student named Seretse Khama (David Oyelowo). They share a love of jazz, and if English musicians aren’t the best at playing with it, they’re not so bad that you couldn’t jitterbug to it anyway.

Khama is black, which doesn’t bother Ruth, though she can’t ignore that others are unhappy at seeing them on the streets together. (In the end credits, three thugs who attack them are listed as “Idiots.”) There’s only one thing that stands in the way of happiness for the couple: Khama reveals to her that he is in line to be the ruler of his home country, Bechuanaland, where he needs to return now that he has finished his education.

They marry anyway. Ruth is disowned by her father, but that turns out to be the least of their worries. Bechuanaland has been a British protectorate since Khama’s grandfather applied to Queen Victoria for help against the Boers to the south. But his people are chafing under British control, which includes as much exploitation as it does protection. To many it appears that their new leader is sleeping with the enemy. And the British government worries that this marriage will lead to destabilization of colonial rule over Africa, especially when South Africa is getting ready to institute its new official policy of Apartheid.

I’m willing to suspend my usual suspicions about historical authenticity for A United Kingdom because it seems to take unusual pains not to tidy up the story. It seeks to tackle all of the political and economic complexities of the situation. Some of them have fairly obvious villains, like the mining companies that want to exploit the country’s as-yet undiscovered resources without paying for them. Some of them shift: an election seems poised to make Winston Churchill a good guy in this story, but just the opposite happens.

(British political interests are largely boiled down into a composite character know as Sir Alistair Canning, played by Jack Davenport as well as could be hoped for from any actor in a part that so screams out for Alan Rickman.)

An interesting that that happens along the way is that the issue of interracial marriage fades away: the people who object to it either realize that they were wrong or simply stop fussing about it in a world with so many other pressing issues. Ruth and Khama lived a long happy life together, bringing prosperity to a country that eventually achieved became independent (we know it now as Botswana). A happy and satisfying ending to an engrossing film: any inaccuracies can be dealt with later.