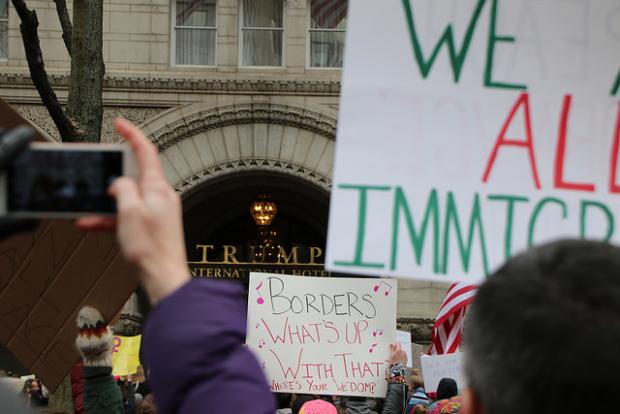 All hail the new pogrom.

I didn’t watch this President’s speech; I don’t want his “more presidential” delivery or his faux “conciliatory tone”. I’m reading some of the takeaways, and learn that this President wants to set up a special office through the already-Orwellian Department of Homeland Security and Immigrations and Customs Enforcement to further perpetuate the utter fiction that immigrants commit disproportionately more violent crimes than native-born Americans. Called “VOICE” for ”Victims of Immigration Crime Engagement”. Trump said that VOICE would offer “a voice to those who have been ignored by our media, and silenced by special interests.”

Does the visa status of a perpetrator of a crime render it a federal matter? Does an assault by a Green Card holder get removed to federal court?

The underlying justification simply isn’t true. It’s a lie, but because this President is all about white nationalist populism, targeting immigrants (regardless of visa status) as inherently dangerous and in need of special police scrutiny is quite literally the first step in the direction of camps and genocide. His presidency is one of executive orders and fearful, hateful, false pronouncements.

The violent crime rate is dramatically lower now than in, e.g., 1990, and immigrants — whether documented or not — commit fewer crimes than native-born Americans. The baiting and demonization of immigrants by this President, and the cheering from Republicans, is a dark chapter from another century. I guess it plays well with his base, and the demonization and hatred of immigrants is nothing new. All of this, however, is a Schande.