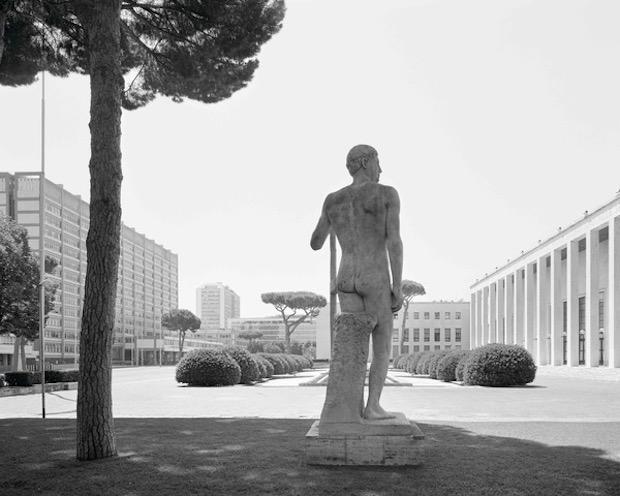 In my opinion, the most important of all the arts is architecture, because it includes everything else.

First there was the Bauhaus. The German school and movement of modernist architecture and design founded just post-World War I and active and influential through the 1920s and early 1930s. But Hitler detested modernism—in the arts and culture areas anyway—not so much when it came to industrial production and the German war machine—and when he came to full power in 1933, shut the Bauhaus school down. It didn’t put a halt to modernism, but was a bump in the road. In Germany at least.

In Italy—the other main fascist state through this whole period—a different story. With Mussolini at the helm, beginning from the early ‘20s. Modernism—all about efficiency, functionality, clean lines, with particular attention to architecture, as to processes and product alike—was key to Mussolini’s grand plan to transform Italy in short order from its prevalently old modes agrarian poverty ways to a progressive, productive industrialized state. So that architecture became a major propaganda tool for the fascist regime.

And so that if you want to view fascist/modernist architecture and infrastructure in the widest variety and array—and its legacy influence on post-fascist era urban development—you go to Italy.

A superbly complex exhibit currently at the UB Anderson Gallery consists of photos and video by six German artists and one Italian of fascist/modernist remnants and legacy throughout Italy. The exhibit is called Photographic Recall: Italian Rationalist Architecture in Contemporary German Art.

“Rationalist” was the descriptive term applied to Italian fascist/modernist architecture—Hitler would have just said “degenerate,” which would have been almost as unfair as when he employed that term for the modernist paintings and sculptures he hated because they were new and different—and the “contemporary German art” reference is apparently to the photos and video, overlooking for the moment the Italian artist in the exhibit, for the sake of brevity, at the cost of accuracy.

All as a way of coming to terms—for the Germans and the Italian as well—with their different national heritage indulgences in fascism and its crimes and iniquities. A kind of expiation by aesthetics—the “art” reference in the subtitle—it would seem.

But it’s more complicated than that. A lot more.

The problematical aspect of the fascist/modernist architecture seems mainly in its propagandizing function on behalf of the regime. The crimes and iniquities. Whereas, substantial ambivalence and ambiguity as to the aesthetic character and quality of rationalist architecture. Which ultimately reflects Bauhaus principles. The stripped-down classicism. (Part of the lure of Italy for these artists’ photographic and video projects—was the ubiquitous presence—in Rome anyway, the locus of much of the work—for purposes of contrast and comparison—of ancient Roman regime actual classical remnants, plus later historical permutations of actual classical, such as the copious Renaissance baroque.)

Ambivalence and ambiguity particularly well illustrated in a video by the Italian artist, Caterina Borelli. It’s called The Date, and shows a pretty young woman putting on lipstick and makeup and we ultimately realize getting ready for a romantic occasion date that then has her getting into her car and heading out to what’s now called the Foro Italico, originally called Foro Mussolini, intended as the site of the 1940 Olympics (but there was a war going on in Italy at the time), but eventually the site of the 1960 Olympics (Wilma Rudolph, Cassius Clay, as Muhammed Ali was then called, Rafer Johnson in the decathlon, etc.). The main stadium there is surrounded by numerous monumental dimensions marble statues of athletes—all pretty much the same or similar impersonal heroic poses and facial expressions—one of which turns out to be the date—the object of the young woman’s affection—which she demonstrates by climbing up on the statue pedestal and nestling lovingly around one of the athlete’s marble feet, which is about as big—the foot—as the young woman herself.

To name the other artists—who have some 130 photos among them—of just about every conceivable sort of architectural and infrastructural view—the Germans: Günther Förg, Thomas Ruff, Eiko Grimberg, Johanna Diehl, Hans-Christian Schink, and Johanna Specker.

A bonus feature is a sequence of a dozen or so Italian newsreel/propaganda shorts from the time on the physical construction of the fascist regime prospective new Italy. Several new towns on drained swamp lands south of Rome. The EUR architectural complex white elephant—herd of white elephants—planned world’s fair site in Rome until once again the war intervened. Footage with an authentic verismo look and feel, presaging postwar era Italian classic cinema. The Bicycle Thief.

Including several construction underway inspection tours by Mussolini himself, amid huge sycophant entourages and crowds of cheering workers, picks and shovels raised high in enthusiastic salute. Mussolini was bad, but not as bad as Hitler. Not as bad as Trump, I think.

The fascist architecture through post-fascist eyes exhibit continues through May 12.