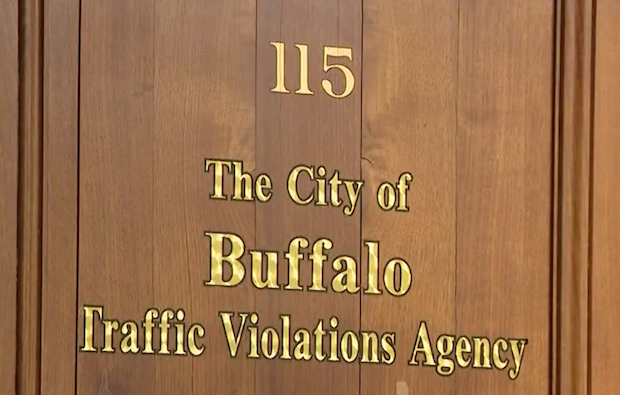 First, City Hall talked the state into allowing it to keep most of the money from traffic tickets issued by Buffalo police.

Police then started handing out tickets in record numbers, jumping from around 32,000 in the year before the Buffalo Traffic Violations Agency was created in 2015 to more than 52,000 the year after. Since then, police have written far more tickets for tinted windows than for speeding or running red lights and stop signs.

Revenues soared accordingly—up from around $500,000 in the year before the traffic agency was created, to more than $2.8 million in the fiscal year that ended last June. Yes, the city had newfound expenses, but its profits were still around $2 million. City Hall had found a profit center.

But city officials had been counting on more. Last summer, the city imposed 13 new fees that, once fully in place, will add at least $100 to virtually all traffic cases. Few traffic courts around the state impose similar fees.

The city’s strategy is costing drivers a lot of money, and, in some cases, their driver’s license. Black and Latino drivers, whose neighborhoods have been targeted for traffic enforcement, appear to be hit the hardest, both in fines and loss of licenses.

“Every time I go to City Hall or the DMV to pay tickets, it’s a wall of black and brown people…The line is almost around the corner,” said Desmond Abrams, an activist in Buffalo.

Common Council members say they’re not motivated by the prospect of generating revenue from traffic violations. But the new fees come at a time when Buffalo’s finances are tight. At a committee meeting last November, Lovejoy Councilman Richard Fontana described traffic enforcement as “mining for gold.”

This story is based on an analysis of traffic tickets issued by Buffalo police between 2014 and 2017 from the state Department of Motor Vehicles; a review of city budgets, reports and meeting minutes; and interviews with more than 35 researchers, attorneys, drivers and city officials. Mayor Byron Brown’s office refused multiple interview requests.

Under the current system, a driver ticketed for a traffic violation is required to submit a plea to the Buffalo Traffic Violations Agency, either by mail or in person at its City Hall office. Most people accept a plea to a lesser offense, unless they are disqualified by outstanding fines or numerous suspensions on their license.

In doing so, drivers avoid points on their license and pay lower fines. The city keeps almost all of the fine money.

This is how it played out recently with one driver when he paid a visit to the city’s traffic agency. Police had issued him a ticket for rolling through a stop sign that could carry up to $238 in fines and three points on his license. His plea offer would reduce the penalty to $150.

If smaller fines and avoidance of points isn’t encouragement enough to accept a plea offer, there’s the city’s unforgiving adjudication of cases. Only 0.5 percent of contested tickets resulted in a not guilty verdict and 25 percent were dismissed or covered by another violation, according to the agency’s most recent annual report.

Under the previous system, which was administered by the state DMV, drivers who contested their tickets won their case 16 percent of the time and 55 percent were dismissed, according to six months of state data from 2015 obtained by Weiss & Associates, a law firm specializing in traffic cases. The state-run system did not allow for plea deals, but used a lower burden of proof.

Police started writing more tickets two years before the traffic agency was created, partly the result of officers setting up traffic checkpoints, which was included in an initiative said to fight crime. Many were staffed by a squad known as “Strike Force,” which was later disbanded following reporting by Investigative Post.

At checkpoints, officers searched for contraband and issued tickets for any traffic violation spotted on a stopped vehicle.

“It’s conceivable that based on the numbers, sure, that the traffic checkpoints added to the number of tickets being issued in certain years,” said Captain Jeff Rinaldo, the police department’s spokesperson. He declined to discuss details, citing ongoing litigation.

Tickets increase after city was allowed to keep the majority of fine revenues.

In 2018, Black Love Resists in the Rust, a local advocacy organization for people of color, filed a lawsuit against the city arguing the checkpoints unlawfully targeted residents of color. The lawsuit cites police data from 2013 to 2017 showing that more than 85 percent of checkpoints were done in black and Latino neighborhoods.

Over twelve weeks of checkpoints in 2017—the only period for which the city provided detailed data—police issued 386 tickets for tinted windows and seized only one gun and confiscated narcotics five times.

Though the department has eased off its use of checkpoints, the lawsuit alleges a wider—and ongoing—pattern of aggressive traffic enforcement against black and Latino drivers. It charges officers with writing tickets for as many violations as possible in order to raise revenue for the city.

“Since the creation of the [Buffalo Traffic Violations Agency], the police have been more aggressively policing and ticketing,” said Keisha Williams, an attorney with the Western New York Law Center working on the case.

It’s not just the increased number of tickets, but the types of violations that have drawn criticism.

Between 2014 and 2017, tinted windows accounted for 17 percent of the department’s tickets issued, more than any other violation, according to DMV data. This is in comparison to under 3 percent in Rochester, Amherst and Cheektowaga.

Police issued nearly seven times as many tickets for tinted windows as for speeding. In 2017, tinted windows were listed as a contributing factor in two vehicle crashes in Erie County, while unsafe speed was listed in 1,735, according to data maintained by the DMV.

Half a dozen motorists told Investigative Post that when ticketed for tinted windows, they were given one ticket for each window. One man said he received 13 tickets during a stop on Bailey Ave. two years ago, including four tickets for tinted windows.

“All I remember saying [to the officer] is ‘Hey, can I say something?’ and he said ‘no,’ and he said, ‘Oh, you got tinted windows too,’ and laughed,” said the driver, who asked to remain anonymous.

Rinaldo, the police spokesperson, said he would be “guessing to answer” why their rate of tinted window ticketing exceeds neighboring municipalities.

Last summer, at the behest of the Brown administration, South District Councilman Christopher Scanlon sponsored an amendment to the City Charter that added 13 new fees the traffic agency could charge. The Council unanimously approved the changes in July.

Scanlon said the “right-sizing” of fees was done to cover costs and “to bring things in line with other municipalities.”

Buffalo’s traffic agency was already turning a tidy profit, however. Last year, it collected $2.8 million and spent around $788,000.

Even so, the agency’s revenues last year were around half of what the city had planned on, and had dropped by about three quarters of a million dollars from the year before. That prompted a flurry of concern within the Common Council and administration, as the dip in revenue placed further stress on the city budget.

When asked, Scanlon said he would reconsider the fees.

In a finance committee meeting last fall, some Common Council members said they were more interested in traffic safety than the agency’s revenues.

But tabs are being kept. Donna Estrich, the city’s commissioner of administration and finance, told the Council: “Traffic violations is below budget, and you know, we’re working with police. They just created a new traffic detail and put that out.”

Fontana responded: “When you’re mining for gold, it’s good to know that there’s gold in the well, and there’s plenty of gold there to be digging for.”

“There is gold there, but more importantly, there’s some safety issues…I think that when we focus on that, it won’t be a money grab,” said Wyatt. “Hopefully those revenues will increase,” he added.

De’Jon Hall, one of four individual plaintiffs in the Black Love Resists lawsuit, said he doesn’t buy the emphasis on traffic safety.

“In my mind, they weren’t balancing the budgets for black lives, but with black lives,” he said.

The traffic agency is unable to charge all the new fees because its software needs updating, according to administrator Danielle Morgera.

The fees that will be tacked onto virtually every case include a $55 “Public Safety Fee” and a $45 “Driver Responsibility Fee.” The first is meant to pay for police costs, according to the agency’s website,while the second is tacked onto any case that results in a payment to the city—and almost all of them do.

An initial extension to pay a fine will cost $15 per ticket. An additional two-week extension will cost $10 per ticket. If still not paid, the agency sends notice to the driver and the DMV indicating that the suspension process can start—at a cost of $50. This is in addition to a state-mandated fee of $70 per suspension to restore a suspended license.

The traffic agency estimates it will release 10,000 license suspensions this year, according to the city budget.

There are other costs for not paying off delinquent fines and fees. After 90 days, the traffic agency files a civil judgment against the driver with the Erie County Clerk’s Office, which can wreak havoc with credit scores. The cost to the driver is $100.

“That is a pretty high fee,” he said. “Any time you have an additional administrative fee, it can be prohibitive for people and you don’t know the type of economic place they’re in.”

The traffic agency describes the new fees as a “prudent and equitable” way to avoid passing on the cost of adjudicating tickets to taxpayers.

“This is far from an equitable way of taxing people—because that’s what this is, taxing people,” said Joanna Weiss, the co-director of the Fines and Fees Justice Center. “This is falling much more heavily on communities of color, who are policed more heavily,” she added.

What’s more, Buffalo’s fees are now among the highest in the state.

Mike Smith, who’d been ticketed for running a stop sign and a tinted window, said he deserved his fine, but that the prospect of administrative fees seemed excessive.

“I think it’s not fair,” he said. “Somebody should fight that.”

The Black Love Resists lawsuit alleges the city’s ticketing practices have caused thousands of low-income residents of color to have their driver’s license suspended. What’s more, the number of tickets issued for knowingly driving with a suspended license, a criminal offense, grew 30 percent between 2014 and 2017, according to DMV data.

Claudia Wilner, an attorney working on the case and expert in license suspensions with the National Center for Law and Economic Justice, said “excessive and multiple” ticketing can drive suspensions.

Several drivers told Investigative Post their license was suspended because they were unable to meet the city’s requirement that fines and fees be paid all at one time. Kevin Helfer, the executive director of the traffic agency, wrote in an email that the policy “promotes financial responsibility and decreases the need for extra public expenses, such as debt collection efforts.”

Yet some municipalities have found that allowing people to pay their debts over a period of time means collecting more of what they are owed. For instance, one county in Florida found that by implementing low-cost payment plans, it collected 32 times more revenue and decreased license suspensions by 36 percent, according to the Chicago Fines, Fees and Access Collaborative.

Avoiding suspensions means sidestepping the indirect economic impacts. One recent study by the Seidman Research Institute in Arizona found that at least 28 percent of drivers lost their job due to a license suspension.

Rebecca Town, an attorney with the Legal Aid Bureau of Buffalo, frequently represents clients who are facing criminal charges for driving while their license is suspended. She would like to see residents offered a payment plan linked to their income, on which they’d avoid a suspension, as long as they continue to pay.