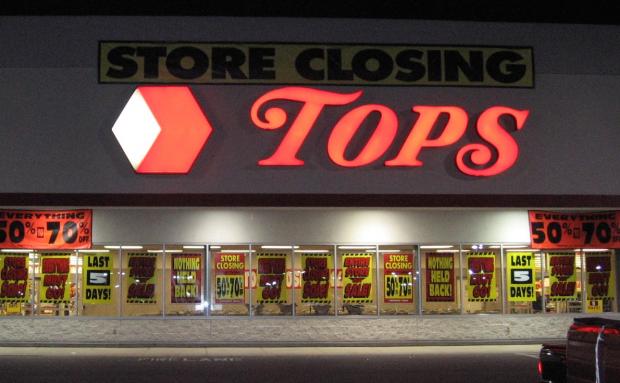 Last week, the grocery store chain Tops declared Chapter 11 bankruptcy, seeking to shed corporate debts accumulated by its former owner Morgan Stanley. The Wall Street bank used this debt to extract hundreds of millions of dollars in dividends for itself and left Tops’s local managers holding the bag. Now with the store’s future up in the air, Tops workers and the communities that depend on Tops for food are left questioning how they will feed their families if the stores close.

The prospect of a bailout has already been floated by local politicians. Citing Tops’s contribution to the regional economy and the importance of maintaining access to fresh foods in communities where Tops is the only grocery store, Assemblywoman Crystal Peoples-Stokes and State Senator Tim Kennedy have both suggested that New York State, possibly through its economic development arm, could step in to, in Senator Kennedy’s words, ensure “the viability and sustainability of Tops in our community.”

But what if, instead of just bailing Tops out, New York State purchased the foundering grocery chain outright and ran it as a public enterprise?

Under public ownership, we could guarantee that union jobs at Tops are not abruptly eliminated or shipped out of the community. We could raise the minimum Tops wage to $15 per hour immediately, putting more money into the hands of local Tops workers and thus into our local economy. We could stock all the Tops stores with good food, the stuff that they usually only have at the suburban locations.

While the idea of a publicly owned grocery store may sound radical at first, it is actually far more reasonable than other state-led economic development efforts in the area, with the potential for far greater public benefits.

As part of the Buffalo Billion program, New York State has spent nearly a billion dollars building and outfitting a factory for SolarCity, a company owned by a literal billionaire. In the bargain we get a commitment to create about 1,500 jobs, with no share of the revenue generated by the project. If you live in Western New York, you can’t even buy the panels manufactured at the South Buffalo facility that your tax dollars built.

Another Buffalo Billion deal, IBM’s so-called “innovation hub” in the KeyBank Center, has turned out to be a $55 million call center used to outsource formerly public sector union jobs.

Compare these projects to the prospect of the state buying Tops. Here is a turnkey business that New York could acquire outright for fraction of what it spent building the Buffalo High-Tech Manufacturing Innovation Hub at Riverbed (that’s the official economic development name of the SolarCity plant), it employs more than 14,000 people (more than the 1,460 guaranteed at SolarCity by an order of magnitude), and (unlike SolarCity and other publicly subsidized businesses) the people of New York State would have actual equity in the business.

Because it would not be under pressure to maximize profits for a small group of shareholders, a publicly owned Tops could afford to pay its workers a fair wage and to sell good food at a fair price. Store management has cited falling food prices and its obligations to its unionized workforce in addition to the massive debts run up by its previous private equity owners as reasons for its bankruptcy. Under public ownership, Tops would have an easier time meeting its obligations, only needing to bring in enough money to cover its expenses. Any profits over that amount could be returned to Tops workers, paid out as a dividend to New Yorkers, or used to seed other publicly owned enterprises.

Public ownership could help address another issue at some Tops locations: the quality of the food being sold. It’s no secret that the standard of produce varies widely from one Tops location to the next and that that variation tracks with the relative wealth (and thus, in our highly segregated region, the race) of the people served by different locations. Earlier this month, before the bankruptcy was announced, Tops was pressured into holding a community meeting organized by former Erie County Legislator Betty Jean Grant due in part to complaints about the produce at its Jefferson Avenue location in Buffalo. If Tops were under public control and accountable to the communities it serves rather than to shareholders seeking profits, we could ensure greater equity in the services provided.

Beyond the logic of public ownership, running a grocery store as a public service also makes moral sense. Every person in the world has a right to healthy, culturally-appropriate foods. Providing universal access to nutrition is a matter of societal concern. Better nutrition is correlated with higher educational attainment and better health outcomes, reducing the amount families need to spend on healthcare and leading to stronger communities overall. It’s why we have free and reduced price school lunches and government programs like Supplemental Nutrition Assistance Program (SNAP), formerly known as food stamps. The widely documented existence of food deserts – areas with extremely limited or no availability of fresh foods – in poor urban and rural communities shows that leaving food access up to profit-driven markets has not led to an efficient or just distribution of our food resources.

A publicly owned grocery store could strike a fierce blow against some of the injustices of our current food system. With the increased efficiencies introduced by eliminating the profit motive, we can provide the nutritious foods that are currently too scarce in some of our communities, at a price that people can afford, and pay people a decent wage for the work entailed in such an operation. Being forced to compete with a publicly owned grocery store would further create incentives for privately owned businesses to increase their wages, open more stores in communities they did not previously serve, and sell their produce at a fair price.

Skeptics might raise the ever-present specters of corruption and mismanagement of public goods that have plagued New York as a reason to be wary of the state taking over a large grocery store chain. SolarCity has only just begun manufacturing solar panels and we are already halfway through the first corruption trial with a connection to the project. This, however, is an indictment of the inscrutable and unaccountable way that program was administered, not of publicly owned institutions. After all, no one is seriously calling for the dissolution of the State University of New York, a massive publicly owned organization many times the size of Tops, due to Albany corruption.

To be sure, transparency and accountability must be paramount in any public economic development endeavor and would be critical in successfully turning Tops into a publicly owned enterprise. Luckily, one mechanism for oversight is already in place in the form of the United Food and Commercial Workers, which represents Tops employees and can advocate on their behalf against the petty grift endemic in public administration in New York State. Further, as a truly public entity, Tops would be subject to the Freedom of Information and Open Meetings Laws, allowing anyone to examine the business’s records and attend meetings. A public oversight board comprised of stakeholders and consumer advocates could also easily be constituted and charged with ensuring that the publicly owned grocery store was fulfilling its mission.

For people still leery of the state running the store, there are other options out there that would bring greater returns in terms of both building the local economy and building workplace democracy than just another corporate handout. For example, the state could provide capital for Tops workers to buy and operate the business as a worker-owned cooperative.

As we watch the Buffalo Billion giveaways to rich developers and well-capitalized billionaire-backed corporations fall short of the hype, the Tops bankruptcy provides an ideal opportunity for our leaders to take bold action with our economic development dollars to shore up a critical component of our societal infrastructure. Investing in a publicly owned grocery store may not have the same glamor or gee-whiz factor that public investments in biotechnology or advanced manufacturing do, but its simplicity and closeness to everyday life (again, everyone needs and deserves to eat) makes it both much more likely to succeed and much closer aligned with civic imperatives.

Rob Galbraith is the co-chair of the Buffalo chapter of Democratic Socialists of America which can be found on Facebook and Twitter at “BuffaloDSA.”