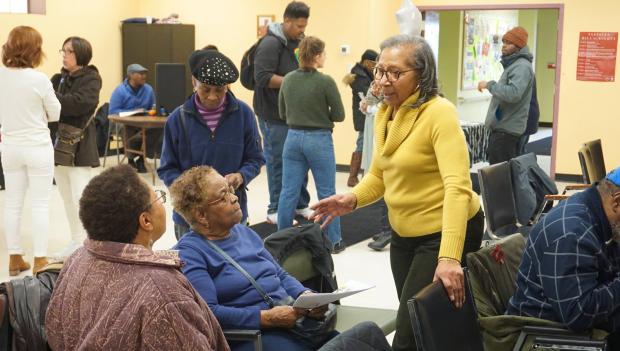 Organizers for the F.B. Community Land Trust celebrated the progress the group has made coordinating with the city, as they prepare to take control of city properties. The group was established by neighborhood residents and advocacy organizations to prevent longtime residents from being pushed out as developers have become interested in the neighborhood, driven by the growth of the nearby Buffalo Niagara Medical Campus. Organizers and residents gathered at the Moot Senior Citizen Center over the weekend to share information with people from the neighborhood and sign up new members.

Denise Barr, the president of the Fruit Belt Advisory Council, said her family has been part of the Fruit Belt for more than 70 years. She recalled the neighborhood’s union job roots, which helped to develop it into one of the city’s strongest communities during its economic heyday.

Despite years of disinvestment, which coincided with the job losses caused by deindustrialization, the communal spirit of the Fruit Belt remains, she said.

“Now we’ve got to push back and say, ‘you know what? This is our community and we are not going to be sold out,’” Barr said. “We are not going to have people come and take our land out from underneath us. Our people worked too hard.”

The land trust distributed a map (below) of lots identified as potential properties the city may approve for a transfer to the group.

In addition, the group gained 70 new members—68 individuals and two organizations—who paid membership fees to support its mission. Members who live in the neighborhood will be able to vote on decisions made within the organization.

While land trust members say that talks with the city have progressed—the map from Mayor Byron Brown’s Office of Strategic Planning is a result of those continuing conversations—no one from the administration or the Common Council was on hand for the meeting. Common Council President Darius Pridgen, who broke the news that the city was working on identifying lots to turn over to the land trust on his radio show last month, was scheduled to appear, but had to cancel last minute to attend a wake.

Pridgen said in a phone interview with The Public that the Office of Strategic Planning and the land trust are now involved in a dialogue aimed at determining details for the land transfer, such as whether the lots they take will be spread throughout the neighborhood or clustered.

“The next step is OSP is reaching back out to coordinate the lots that they have finally decided on,” Pridgen said.

After the land trust and the Brown administration come to an agreement on which lots will be transferred, the Common Council will need to vote to give final approval of the deal, which Pridgen hopes will happen as early as this spring.

Mike DeGeorge, a spokesperson for Brown, told The Public on Monday that he would try to get someone from the city to speak with a reporter to explain in detail the process of transferring the lots. No one had called by the time that this story was published.

India Walton, a neighborhood resident and land trust member, said that she appreciates the work that the city and Pridgen’s office have done. While she would have liked to have seen people from City Hall at the event there, the day was about the accomplishments of the community.

“We appreciate all of (Pridgen’s) help and support,” Walton said. “But, today is about us.”

While, the weekend event often carried a revelatory tone, several speakers reminded the group that there was more work to be done and that they need to keep the pressure on the doors of City Hall to make sure they deliver on their promises.

John Washington, an organizer with PUSH Buffalo who has been working with the F.B. Community Land Trust, reminded the audience that the moratorium on developers buying city-owned property in the neighborhood is temporary and could soon be lifted.

‘“We need everybody to really come together and have that feeling of the Fruit Belt that I hear about when I talk to people, when I sit in people’s living rooms and they talk about how the Fruit Belt used to be,” Washington said. “We really need to bring that back and bring that vision back along with our young people in order to make sure that this movement is going to continue, and that we see the type of community we want to see, not the community that these developers want to see.”