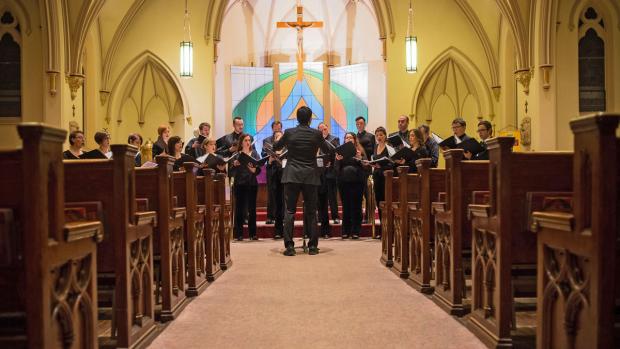 On a recent Tuesday evening Rob Pacillo sat at his keyboard surrounded by twenty people in open song until they all realized together that something was amiss in their “Ave Maria.” Like a school of fish, a choral group is an exercise in collective movement, where—solos hardly being an exception—the individual always performs as a mere function of a larger body. As soon as one fish opts for aberration out of instinct rather than bravery, the body politic follows.

Pacillo reset the song, instructing the singers in a wide circle around him almost filling the large room off the main chapel of Blessed Sacrament Church on Delaware Avenue that “This is a really easy one to miss if you don’t all breathe when the hands go up.” Pacillo, whose underspoken intensity is symbolized best by his neat tie and sweater vest, raised his hands and the room performed its best diaphragm inhale before expelling back into song just a beat later. Pacillo nods and smiles slightly as the hands follow astride: the universal language of music directors.

Music teacher in Lockport by day, Pacillo is Artistic Director of Harmonia at least every Tuesday night. The piano and harmonica that Pacillo employs in his direction is there only to establish the key, a tease of instrumental technology that came along sometime after vocal song. Founded in 2006, Harmonia is exclusively an a cappella ensemble that performs eight concerts a year locally.

And in a turn of events that proves that things happening in small groups in underutilized spaces under drop ceilings and fluorescent light have a near-universal implication: Harmonia is one of three ensembles invited to perform in Carnegie Hall on March 13 for its A Capella Next concert.

Derived from perhaps the most ancient and elemental human art form and set most often in churches, it’s hard to divorce choral music from its centuries-old liturgical history. But the ensemble seems far less religious than spiritual.

Roger Griffiths, a chaplain at Sisters of Charity Hospital and Harmonia singer since the beginning, put it this way: “I’m part of the spiritual-not-religious culture of the 80s and 90s. I mean we all have these big unanswerable questions, right? Music has always been my doorway.”

This attitude seems to permeate the group, who by way of cursory observation, has only two members north of 45 years of age. When asked about the spiritual aspect of the material, Ericka Milczarski, a third grade teacher in Lockport, turned the question on itself. “The special thing about this group is that it’s a smaller group and we know each other well. The music community in Buffalo is a small world and we have a large following, and we’re able to make a connection with each other and with our audience.” After all, before any church had a building it was a community of the faithful: ecclesia meaning “assembly” or the place that that assembly exists.

But since they do have buildings, it’s fascinating to consider the relationship between voice and architecture through the lens of a cappella choral music. The term “a cappella” itself meaning “in the manner of the church” suggests a history that must extend as far back as when the first humans discovered reverb. The ur-artists who painted in caves almost certainly sang in them. It only makes sense that if the decision is made to build a church with a ceiling high enough to suggest the eternity of the heavens, that you better fill that acoustic space with singing. In contemporary Buffalo terms, if you’re going to have all of these half-empty but gloriously built churches, someone or some group will inevitably find a new way to appreciate the architecture.

While they rehearse every Tuesday, members constantly preen their feathers for flight in the meantime, singing scales and arpeggios in their cars and homes. The old saying about getting to Carnegie Hall rings true. The exercise differs for each singer, “depending on their instrument,” Veronica Shanchuk explained, but for each it’s daily practice and not just in the shower. Pacillo’s quick lesson about breathing is lost on no singer, attentive breathing being the most mundane but important vocal exercise.

The Harmonia repertoire favors modern, even contemporary composers, but touches on chamber choral roots in chant, follows the arc through the Renaissance and into post-Industrial Europe, and diffuses into the spectrum of modernity. Half of their current repertoire is music composed by living artists, including a piece by SUNY Fredonia faculty Rob Deemer and another composed by Harmonia member Jeffrey Trenchard. An upbeat spiritual “In Dat Great Gittin’ Up Mornin’” is tempered by Michael McGlynn’s “Jerusalem,” a challenging feat of heterophony where singers enter the same music at different points, unifying briefly at a common pitch before going their separate ways again.

Harmonia puts on four programs every year, each consisting of two performances held almost exclusively in churches at night with the ensemble’s 200 pound 20-candle candelabra built by Andrew Chambers of Arc Iron Creations providing the only light. The current concert series, Into Light, will be held on March 6 at 8 pm at St. Louis Church in Buffalo, and on March 8 at 7 pm in St. Peter Church in Lewiston.