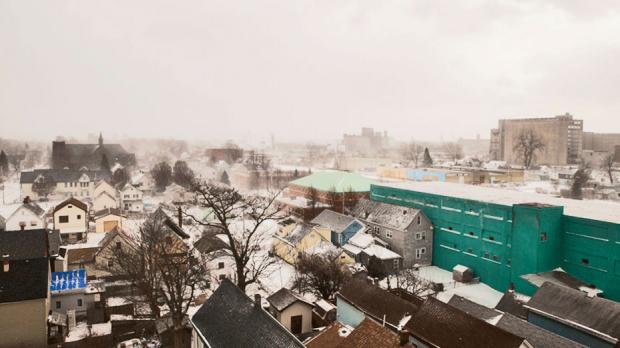 Here at The Public our staff has many ties to Buffalo’s Old First Ward, a predominantly Irish neighborhood filled with history, character and some of the most genuine people in Buffalo. I personally spent the first 12 years of my childhood in the OFW on Vincennes Street. I remember sledding on the dell, the smell of Cheerios every morning, seeing the ballpark fireworks from my front porch, eating breakfast at Leahy’s, biking to the secret pond, playing street hockey (rain or shine) in the parking lot across from the OFW Community Center, learning to golf in Father Conway Park and visiting Bill’s corner store for hot chocolate before getting on the Turtle bus with the rest of the neighborhood kids heading to Waterfront Elementary School.

When school let out every year, summertime was bliss. The roar of a fire hydrant emptying onto O’Connell Street or the trains rolling down Republic Street in the evening as the sun set were the sights and sounds of summertime. The colder months brought harsh snow from the lake and a seemingly permanent cold wind. However, the neighborhood is strong and withstands brutal weather all while keeping an eye on the light at the end which are the two weekends in March that offer the Shamrock Run and the “Old Neighborhood” St. Patrick’s Day Parade. A St. Patricks Day parade which powers though the Valley and Ward on the Saturday before St. Patricks Day every year. If you have never been, I encourage you to grab a beer and a nice spot on O’Connell Avenue to take it all in. This year the parade is Saturday, March 14th at 12 noon.

Prior to parade weekend, on Monday, March 2nd at 8 PM, WNED will be showing a documentary telling the story “of the treasured neighborhood through the voices of those who live there. The program, an original production of WNED -TV, captures the feeling of camaraderie and through it teaches us about where Buffalo has been and where it might be going”. This documentary is very important to The Public, thus we will be watching the premier at Gene McCarthy’s in the OFW and we encourage you to join us. We will gather at 7:30 PM to get situated. The Swannie House will also be showing the documentary, but The Public and our friends will be at Gene McCarthy’s. The documentary features our good friends Mark Goldman, Peggy Overdorf and Laura Kelly. Come one come all, we can’t wait to celebrate the history and future of the Buffalo’s Old First Ward. For any more information email sean@dailypublic.com or check out wned.org.