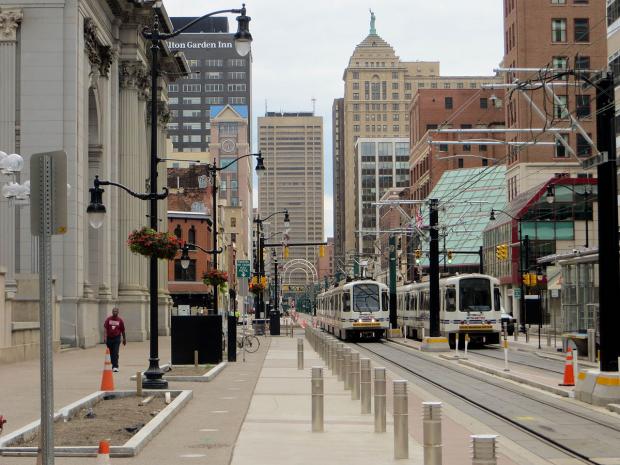 The peer-reviewed research about whether or not cities do better with streetcars or with buses is in, and it’s been in for a very long time, and New York State taxpayers really should not have to shell out another nickel for another study about whether to invest in streetcars.

Streetcars, or trams, or light-rail rapid transit (LRRT) all work. Streetcars are cost-effective, they’re pretty, they attract new ridership, they function well both when networked with light-rail rapid transit or subways (e.g. Portland, Budapest, Toronto, Montpellier, etc.), and when networked just with buses in smaller places (e.g. every medium-sized European city that doesn’t have a subway, and Tampa, Nashville, Cincinnati, Cleveland, and soon in Minneapolis-Saint Paul).

Being able to take a tram from Erie Canal Harbor all the way out to UB North Campus, riding past a functioning Boulevard Mall, is a dream. But it’s a strange transit plan that ignores how long the walk would be for any person who might want to board that tram anywhere but at the end-points of the line. It’s a strange plan that ignores that there’s a radical and rapid and very disruptive remaking of retail going on right now, a change that is putting most of the legacy retail investment in jeopardy of obsolescence unless it’s a grocery store or a discount warehouse. And it’s a downright bizarre fantasy to think that a single intermittent transit option that connects a vacancy-plagued regional administrative and entertainment district with an island university campus 15 miles away will work to address the needs of the former or the function of the latter.

Congressman Brian Higgins is correct: Buffalo’s transit planners should be focused on improving the light-rail system that we have right here, in the urban core, and not only because the Trump administration is unlikely to fund it a $1 billion line through Amherst to UB, but because there is no prospect whatsoever—none—that that investment will do what city-center streetcars do best, which is stimulate the density that helps cities become economically stronger.

The question is why the NFTA doesn’t know this—and why it’s going to spend over $5 million in order to plan a system that can’t work.

Buffalo had an extensive electric streetcar system that was scuttled in favor of smoke-belching buses. The map of the streetcars system is very compelling: With the benefit of decades of hindsight, it’s hard to imagine why city leaders decided to shut it down.

There are places in the world where the streetcar systems were never shut down—specifically, in Europe, where land-use rules have been effective in preventing the low-density suburban sprawl that makes running any US transit system a very daunting challenge.

The US has very few metro areas that are as compact as European cities. The enthusiasm that planners and urbanists have for Portland, Oregon, which has both the downtown streetcar and the MAC train to the airport, is that it is landlocked by geography as well as by law: There is sufficient density for great public transit options because there’s a growth (sprawl) boundary and because there are mountains, the Columbia River, and competing economic interests, including farmers, wineries, and foresters.

We don’t have that here. Until Erie County Executive Dennis Gorski killed it quietly in the night, there was a makeshift, half-baked regional planning entity. His successor Joel Giambra tried to revive it but was thwarted by the county legislature, which enacted something well short of an effective county land-use planning authority a couple of years ago. The only Metropolitan Planning Organization that meets the federal definition is the Niagara Frontier Transit Authority.

But the NFTA has absolutely no power whatsoever to limit sprawl—low-density development—which persists in this region, which has had almost exactly the same population since 1970, but where more than 76 percent more land is now in use than it was then.

So what to do?

In Portland, or Toronto, or in most medium-sized cities in Europe, you would not need an automobile in order to achieve any of those tasks.

How to figure this out

The entire board of the Niagara Frontier Transit Authority should take a five-day, five-stop trip to the cities of Buffalo’s size. Include Lackawanna, Cheektowaga, West Seneca, Tonawanda, and the city-adjacent sections of Amherst, and we have a typical medium-sized urban agglomeration very comparable to the 300,000-to-500,000-population cities of Caen, Nantes, Bordeaux, Toulouse, and Montpellier in France, and to Hamilton and Kitchener-Waterloo in faraway, exotic Ontario. If we can’t take some of the $5 million for the study that some politically connected engineering firm is going to do for us, then maybe a civic-minded local tycoon or foundation could step in and buy all the commissioners and their staff the five-day trip to France.

Or maybe we could just hire a bus for a day to drive us up to Toronto, then stop in Kitchener-Waterloo, then in Hamilton. The good people of Hamilton pile into buses every couple of years to go and poke around in Buffalo, Cleveland, Detroit, and Pittsburgh to see what the American side of the Great Lakes is doing, and their response was to return home to the birthplace of Tim Horton’s and vote in favor of creating a brand-new light-rail transit system that will run east-west and north-south. The money is in place, the plans are firming up, and Hamilton will soon have what the connected, adjacent cities of Kitchener and Waterloo are about to start up: a downtown-connecting light-rail rapid transit system.

All is not paradise in Canada: There’s a desperate need for more streetcars east of Toronto, but there is a plan for the next two decades, and the deliverable is that nobody in the Greater Toronto Area will be more than two-thirds of a mile from a tram.

But we don’t need to wait. We can see the future—and if we can’t get the tycoon or the foundation of any of the $5 million from the planners to go to France or Hamilton or Kitchener-Waterloo, we could try Google. You can try it on your own: Google the words streetcars, trams, LLRT, and the medium-sized cies of Caen, Toulouse, Nantes, Montpellier, and take a look.

Hamilton’s trams will probably look like the sleek, brand-new streetcars built by the Canadian firm Bombardier (in France, with the local partner Alstom) that function extraordinarily efficiently, quietly, with great ridership of every social class in Caen, Nantes, Bordeaux, Toulouse, and Montpellier.

It’s a city thing. The rides are short and cheap. There isn’t an airport in any downtown of any of these places, but there isn’t an airport outside any of these places that isn’t served by a light-rail train. In France, the light rail systems also intersect with inter-urban electric trains and with the TGV, but let’s stop dreaming about what will never happen in the USA, and focus on the very practical reality of making choices about the public transit system we have in place and that we need to improve.

Facing reality means this: Investors and planners and government and institutional leaders need to focus our collective efforts on Buffalo’s core, which needs more population, and more population density, and refreshed and convenient and extended transit options, and strengthening that core means focusing all available resources on achieving successes visibly, quickly, and sustainably.

Dispersal of transit resources to low-density areas is a recipe for enormous expense, service disruptions, and empty cars running infrequently.

The sad fact is that it will take a generation or more to undo the damage of population dispersal. We should focus the fix where it will actually work. Like your personal trainer says, focus on the core.

Bruce Fisher teaches at SUNY Buffalo State, where he is the director of the center for Economic and Policy Studies.