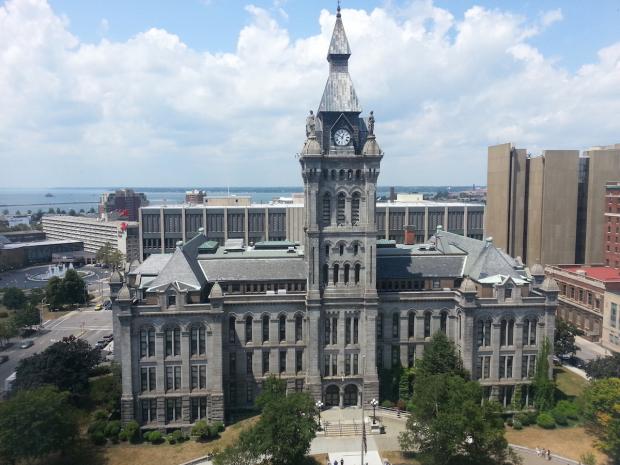 The Buffalo News has expended substantial space and ink reporting and editorializing on the effort of Erie County’s elected officials to determine what is or isn’t a “nominal” gift that county officers and employees may accept without running afoul of his or her ethical obligations. The discussion arises in the midst of the county legislature’s unimpressive effort to rewrite the county’s Code of Ethics.

The focus of the public debate—by the newspaper and county legislators—has been on a rather mundane issue: Should a 200-level Sabres ticket be considered an allowable gift?

According to the News editorial board, the “nominal gift” question and other complex ethical concerns could be appropriately resolved if county lawmakers consider the following question: “How best can we instill and protect the public’s confidence in government?” From my perspective, it would be more useful (and more honest) if our county officials, the media, and Erie County residents asked the following question:

What is more likely to improperly influence our county’s elected officials, a Sabres ticket (which, this season, virtually no one wants), or the generous political contributions the county executive, members of the county legislature, the district attorney, the sheriff, the county comptroller, and the county clerk pursue and receive each time they run for office?

The elephant in the room

I have little doubt that an overwhelming majority of residents would perceive political contributions as the bigger threat to their confidence in government. To help place my suggested inquiry into a tangible context, I visited the website of New York State’s Board of Elections and retrieved information concerning the contributions various Erie County officials have received between January 2010 and February 2018. Here are some thought-provoking results:

Given the stunning contrast between the value of the token gifts offered to our elected officials and the size and significance of campaign war chests, it seems rather frivolous for our county’s lawmakers to prepare, discuss, and argue over a detailed list of what should or should not be treated as a “gift” under the new Code of Ethics. Can our lawmakers actually quibble, with a straight face, over promotional hats and t-shirts, publicly-presented sports memorabilia, or invitations to attend personal or family social events, when political contributions of $1,000, $5,000, or even $10,000 are the metaphorical “elephant in the room”? Apparently, they can.

Mind you, I don’t mean to suggest that the topic of political contributions has been totally ignored by our intrepid legislators. Erie County legislators have managed to slip into their latest Code of Ethics proposal a provision meant to shield county officials from any suggestion that political contributions—even if they violate the state’s election law—are to be considered “gifts” intended to influence the performance of an elected official’s duties:

Proposed Code of Ethics, Section 6(a) … For purposes of this sub-section, the term “gift” shall not include … (viii) contributions reportable under article fourteen of the Election Law, including contributions made in violation of that article of the election law;…

Please note that I am not suggesting that a municipality’s code of ethics is the appropriate mechanism to address as vexing and complicated an issue as the corrupting impact of political contributions on the integrity of our democratic institutions. On the other hand, I would find it terribly refreshing if one of our elected officials were to decide that a political contribution offered to her or him appears to be an improper attempt to influence her/him in the conduct of her/his office, and files an official report pursuant to Section 11—“Duty to report”—a provision found in both the current and proposed county code of ethics:

Every county office or employee shall report to the Erie County Board of Ethics, district attorney and county attorney any action which may reasonably be interpreted as an improper attempt to influence him in the conduct of his office.

The proposed Code of Ethics—exceeding its authority

The county’s authority to adopt a code of ethics is found in Article 18 of the state’s General Municipal Law [GML], entitled “Conflicts of Interest of Municipal Officers and Employees.” GML Section 806 provides the following instructions:

GML Section 806. Code of ethics. 1. (a) The governing body of each county, city, town, village, school district and fire district shall … adopt a code of ethics setting forth for the guidance of its officers and employees the standards of conduct reasonably expected of them… Codes of ethics shall provide standards for officers and employees with respect to disclosure of interest in legislation before the local governing body, holding of investments in conflict with official duties, private employment in conflict with official duties, future employment and such other standards relating to the conduct of officers and employees as may be deemed advisable. Such codes may regulate or prescribe conduct which is not expressly prohibited by this article but may not authorize conduct otherwise prohibited… [Emphasis added.]

In an opinion letter dated February 14, 2018, County Attorney Michael A. Siragusa advised the Erie County Legislature of his conclusion that “there is no evident conflict” between the proposed Code of Ethics and the ethics laws enacted by the New York State Legislature. (Here’s the County Attorney’s letter: Code of Ethics 02-14-18 Dept of Law letter.)  I respectfully disagree.

Failure to prohibit “conflicts of interest” banned by GML Article 18

Amazingly, neither Erie County’s current Code of Ethics, nor the proposal now under consideration, includes this ban against a county officer or employee having an “interest”—defined as “a direct or indirect pecuniary or material benefit accruing to a covered individual or his relative”—in a contract with Erie County. Rather than prohibiting the proscribed “conflicts of interest,” county lawmakers (as set forth at Section 5, “Disclosure of interest in county business”) merely require a county officer or employee with an interest in an actual or proposed contract with the county to: (i) “publicly disclose the nature and extent of the interest in writing”; (ii) “consider divesting himself of the interest, if he can do so without undue hardship” (with the conflicted officer or employee’s conclusion in that regard being “conclusive”); and, (iii) “If he does not divest himself of that interest, he must abstain from participation in such action.”

By allowing elected officials and other county officers and employees to decide whether they wish to divest themselves of an interest in a county contract, rather than prohibiting the conflict, the current and proposed codes violate GML Section 806 by, in effect, “authoriz[ing] conduct otherwise prohibited” by GML Article 18. I suggest that our county lawmakers, as well as the County Attorney, go back to the statute that authorizes (and, mandates) a code of ethics, and slowly and carefully read the “Conflicts of interest prohibited” provisions.

Reflecting the significance of its prohibition against conflicts of interest, GML Article 18 makes contracts intentionally entered into despite a prohibited conflict of interest “null, void and wholly unenforceable”:

Any contract willfully entered into by or with a municipality in which there is an interest prohibited by this article shall be null, void and wholly unenforceable.

It appears that Erie County’s lawmakers have willfully excluded this fundamental provision from the county’s Code of Ethics, and, in doing so, have authorized contracts prohibited under GML Article 18.

The language is less than clear, but the current and proposed code of ethics compel candidates for elected office to file extensive financial disclosure statements. While it may be beneficial to voters (and to incumbents facing a challenger) for candidates to publicly disclose their financial information prior to election day (after all, many Americans wanted presidential candidate Donald Trump to make his tax returns public), the issue for county lawmakers is whether they possess the authority to require candidates for elected office in Erie County, as part of the county’s ethics code, to file financial disclosure statements.

I have no knowledge of any court decisions addressing this legal issue. In my opinion, the answer is pretty clear: GML Article 18, at Section 811, only authorizes a municipality—such as the County of Erie—to require the filing of financial disclosure statements from two categories of individuals: municipal officers, employees, and elected officials, on one hand, and local political party officials, on the other. There is no authority—at least in GML Article 18—to compel such disclosure by candidates for elected office.

The proposed Code of Ethics—exclusion of unpaid officials

GML Article 18’s definition of “municipal officer or employee” is appropriately broad, and includes an officer or employee “whether paid or unpaid,” as well as “members of any administrative board, commission or other agency” of the municipality. In doing do, it ensures that conflict-of-interest and disclosure provisions apply to individuals who serve without compensation on administrative and policy-making boards—individuals who often are well-connected politicos, influential business women and men, and/or campaign contributors.

County lawmakers have chosen to limit the term “employee” to a person “who receives a salary or wage” from Erie County. They also have not mentioned in their definition of “officer or employee” whether the term applies to the members, officers and employees of the Erie County Industrial Development Agency [ECIDA].

While members of the ECIDA board of directors are not compensated, they possess the power to dole out millions of dollars in tax abatements and other forms of “corporate welfare” to Erie County businesses and organizations. As legislator Lorigo expressed in a press release when he was appointed to the ECIDA board: “The ECIDA can have a significant impact on our community, providing valuable incentive programs that will make Western New York stronger for the long-term.” [Note: Mr. Lorigo is no longer on the ECIDA board.] Given the policy-making powers of the ECIDA, the updated Code of Ethics must make it clear that the code’s financial disclosure provisions apply to the ECIDA members and staff.

Clarification is also needed on the status of members of the county’s Board of Ethics. As with ECIDA members, appointees to the Erie County Board of Ethics are uncompensated, but possess significant discretionary powers. The public has the right to know as much as possible about the financial, family, political, and business connections of individuals entrusted with the authority to pursue—or not—county officers and employees accused of violating the code of ethics.

The proposed Code of Ethics—making Board of Ethics even more political?

The current Code of Ethics calls for a six-member Board of Ethics. Each member is appointed by the county executive subject to confirmation by the county legislature, and all six members possess full voting powers.

In contrast, the current proposal would increase the size of the board to eight members, five of whom would be full voting members appointed by the county executive subject to confirmation by the county legislature, and three of whom would be non-voting “ex-officio members.” One ex-officio member would be appointed by the Chair of the Erie County Legislature (currently, Peter J. Savage, III), one by the Legislature’s Majority Leader (currently, April N. M. Baskin), and one by the Legislature’s Minority Leader (currently, Joseph C. Lorigo).

I can’t help but question the wisdom of this change. Given the sensitive and confidential nature of Board of Ethics proceedings, what constructive role would non-voting members play? How would the investigation of alleged ethical violations be enhanced by the presence of individuals who would almost certainly act as his or her appointee’s “eyes and ears”?

Our elected officials and their advisors must invest as least as much time and energy to ensure compliance with the letter and spirit of Article 18 of New York’s General Municipal Law—the source of their authority to adopt and amend a code of ethics—as they have drafting and quibbling over what is or isn’t an acceptable gift. If they do, the public might actually regain some confidence in government.